Does Microwaving Foods In Plastic Containers Cause Cancer?

From TikTok videos to viral emails — for decades, warnings have circulated online about the alleged dangers of microwaves. But are they credible? 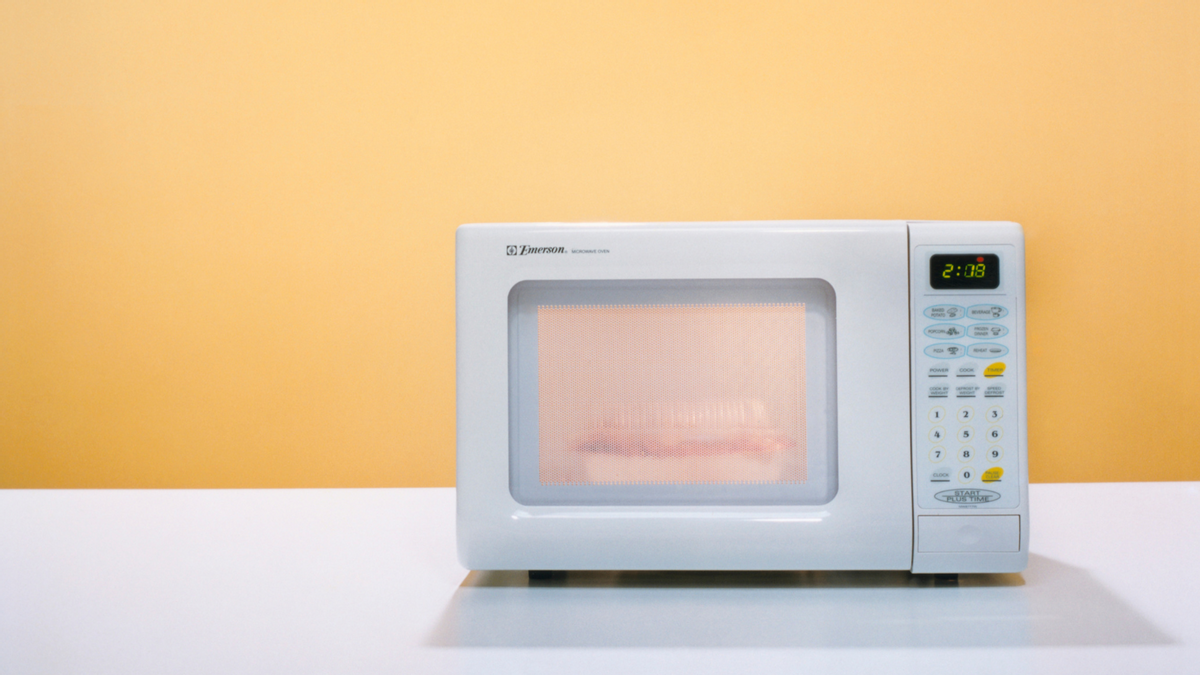 Does microwaving foods in plastic containers release cancer-causing agents into the foods? (Image Via Getty Images)

For decades, people have been sounding alarm bells on alleged health risks associated with a common kitchen appliance — the microwave. As of 2022, TikTok videos supposedly exposing the "truth on microwaves" and how they supposedly emit dangerous levels of radiation had racked up tens of thousands of views. In the clip below, for instance, someone used a handheld radiation detector to purportedly make the point.

It's true that microwaves use electromagnetic radiation to heat food fast. However, in the U.S., federal health and safety regulators say the amount of radiation that leaks from a microwave throughout its lifetime is minuscule (or "far below the level known to harm people"), and they do not let manufacturers put microwaves on the market for people to buy unless they "do not pose a hazard to public health." The Food and Drug Administration (FDA) says on its website:

A Federal standard (21 CFR 1030.10) limits the amount of microwaves that can leak from an oven throughout its lifetime to 5 milliwatts (mW) of microwave radiation per square centimeter at approximately 2 inches from the oven surface. This limit is far below the level known to harm people. Microwave energy also decreases dramatically as you move away from the source of radiation. A measurement made 20 inches from an oven would be approximately 1/100th of the value measured at 2 inches from the oven.

The standard also requires all ovens to have two independent interlock systems that stop the production of microwaves the moment the latch is released or the door is opened. In addition, a monitoring system stops oven operation in case one or both of the interlock systems fail.

All ovens must have a label stating that they meet the safety standard. In addition, the FDA requires that all ovens have a label explaining precautions for use. This requirement may be dropped if the manufacturer has proven that the oven will not exceed the allowable leakage limit even if used under the conditions cautioned against on the label.

To make sure the standard is met, FDA tests microwave ovens in its own laboratory. The FDA also evaluates manufacturers' radiation testing and quality control programs at their factories.

Before TikTok warnings about microwaves' purported health risks, people circulated emails urging similar caution. Since 2002, for example, the below-transcribed message spread widely about a morning news segment on a Hawaiian local TV station, KHON-TV — sometimes with a disclaimer claiming "Johns Hopkins has recently sent this out in their newsletters."

Info for the Health Conscious

On Channel 2 this morning. They had a Dr. Edward Fujimoto from Castle Hospital on the program. He is the manager of the Wellness Program at the hospital. He was talking about dioxins and how bad they are for us. He said that we should not be heating our food in the microwave using plastic containers. This applies to foods that contain fat. He said that the combination of fat, high heat and plastics releases dioxins into the food and ultimately into the cells of the body. Dioxins are carcinogens and highly toxic to the cells of our bodies. Instead, he recommends using glass, Corning Ware, or ceramic containers for heating food. You get the same results without the dioxins. So such things as TV dinners, instant saimin and soups, etc. should be removed from the container and heated in something else.

Paper isn’t bad but you don’t know what is in the paper. Just safer to use tempered glass, Corning Ware, etc. He said we might remember when some of the fast food restaurants moved away from the foam containers to paper. The dioxin problem is one of the reasons.

Pass this on to your family and friends.

(In November 2004, this message was combined with another piece about the purported dangers of lead-containing lipstick, and, in 2007, it was combined with a spurious “cancer update” falsely attributed to Johns Hopkins Hospital.)

One- or two-minute health spots on local news programs are not ideal sources of medical information. While important basic information can be imparted in such a format, trying to explicate complex medical topics in a minute or two can easily mislead or confuse viewers, many of whom come away believing absolutely whatever they’ve heard (or think they’ve heard) because “a doctor on TV said it was true."

That a doctor (or, more accurately, someone bearing the title “Dr.”) appears on TV does not mean they are a leading practitioner in the field; it generally means only that they had something to say that a news director considered newsworthy, accurate or not. (The “Dr. Edward Fujimoto” identified in this piece was not a staff physician from “Castle Hospital” or even a medical doctor. He was a Ph.D., serving as director of the Center for Health Promotion at Castle Medical Center in Kailua, Hawaii.)

What TV news covers is often dictated by ratings, not importance, and sensational claims can generate better ratings than straightforward, mundane information — even if the latter is more valuable to the viewing audience. It’s a pretty good assumption that if using plastic containers in microwaves — as millions of people have been doing for decades — posed a significant risk of cancer, you’d be hearing about it somewhere other than an e-mail forward of an anonymous summary of a morning news spot on a Hawaiian television station.

Is there really something to the central claim of the email, that heating plastic in microwaves releases a cancer-causing agent into the food?

Yes, it is certainly possible that substances used in the manufacturing process of plastics can leak into food during the heating process, which is why the prudent always make sure to use only “microwave safe” plastic wrap and plastic containers when heat is going to be involved. The FDA imposes stringent regulations on plastic containers meant for microwaving as a preventive measure.

In general, whenever you heat something you increase the likelihood of pulling chemicals out. Chemicals can be released from plastic packaging materials like the kinds used in some microwave meals. If you are cooking with plastics or using plastic utensils, the best thing to do is to follow the directions and only use plastics that are specifically meant for cooking. Inert containers are best, for example heat-resistant glass, ceramics and good old stainless steel.

Dioxins are dangerous compounds sensible people want to have as little to do with as possible and, thus, are cautious about using anything associated with them. Thankfully, they don’t appear to be lurking in commonly used plastic wrap and containers.

Nasty chemicals can be and sometimes are found in plastic items, and heat tends to allow them to break free. It therefore makes sense to eschew letting any plastic not clearly identified as “microwave safe” or “microwaveable” touch food you’re going to heat. If you cover a dish you intend to microwave with ordinary plastic wrap, do not let the covering touch the food, because some of the plasticizer in the wrap — which may contain toxic chemicals, as opposed to does contain toxic chemicals — could migrate to what you’re cooking, especially foods high in fat. Alternatively, use waxed paper or microwaveable plastic wrap for this purpose. Those who are very, very cautious about the potential for contamination might choose to adopt the central point of the email’s advice, which is to decant all items into glass or ceramic containers before microwaving.

Months after the viral email surfaced, the claim took the form of another message — this one describing a seventh-grade student's science project:

As a seventh grade student, Claire Nelson learned that di-ethyl-hexyl-adepate (DEHA), considered a carcinogen, is found in plastic wrap. She also learned that the FDA had never studied the effect of microwave cooking on plastic-wrapped food. Claire began to wonder: “Can cancer-causing particles seep into food covered with household plastic wrap while it is being microwaved?”

Three years later, with encouragement from her high school science teacher, Claire set out to test what the FDA had not. Although she had an idea for studying the effect of microwave radiation on plastic-wrapped food, she did not have the equipment. Eventually, Jon Wilkes at the National Center for Toxicological Research in Jefferson, Arkansas, agreed to help her. The research center, which is affiliated with the FDA, let her use its facilities to perform her experiments, which involved microwaving plastic wrap in virgin olive oil. Claire tested four different plastic wraps and “found not just the carcinogens but also xenoestrogen was migrating [into the oil]….” Xenoestrogens are linked to low sperm counts in men and to breast cancer in women.

Throughout her junior and senior years, Claire made a couple of trips each week to the research center, which was 25 miles from her home, to work on her experiment.

An article in Options reported that “her analysis found that DEHA was migrating into the oil at between 200 parts and 500 parts per million. The FDA standard is 0.05 parts per billion.” Her summarized results have been published in science journals. Claire Nelson received the American Chemical Society’s top science prize for students during her junior year and fourth place at the International Science and Engineering Fair (Fort Worth, Texas) as a senior. “Carcinogens-At 10,000,000 Times FDA Limits” Options May 2000. Published by People Against Cancer, 515-972-4444.

To add to this: Saran wrap placed over foods as they are nuked, with the high heat, actually drips poisonous toxins into the food. Use a paper towel instead.

This gist of this story was true. A student named Claire Nelson did perform the experiment described for a school science fair project back in 1997 by working with an FDA-affiliated laboratory. (She came up with the idea for the project while she was in seventh grade, but, as noted, she didn’t actually conduct the experiment until three years later.)

Like the Fujimoto piece, however, the claims here tend towards the alarmist. The results of the experiment described tended to indicate that diethylhexyl adipate (DEHA) and xenoestrogens could migrate from plastic wraps into microwaved food (specifically, olive oil — the “food” used in the experiment) but only with some brands of plastic wrap (primarily ones not sold as “microwave-safe”), and only when the plastic wrap was in direct contact with the food being heated. Moreover, no research has yet demonstrated that DEHA poses a significant cancer risk to humans at the levels noted here (even though they exceed FDA standards) or that xenoestrogens are a direct cause of breast cancer in women or reduced sperm counts in men.

This article was updated to meet Snopes' current formatting standards and to include TikToks spreading the false rumor.