Did Planned Parenthood Say There Should Be a Disney Princess Who Had an Abortion?

Screenshots of a purported Planned Parenthood tweet circulated that appear to suggest a controversial idea for a Disney heroine. 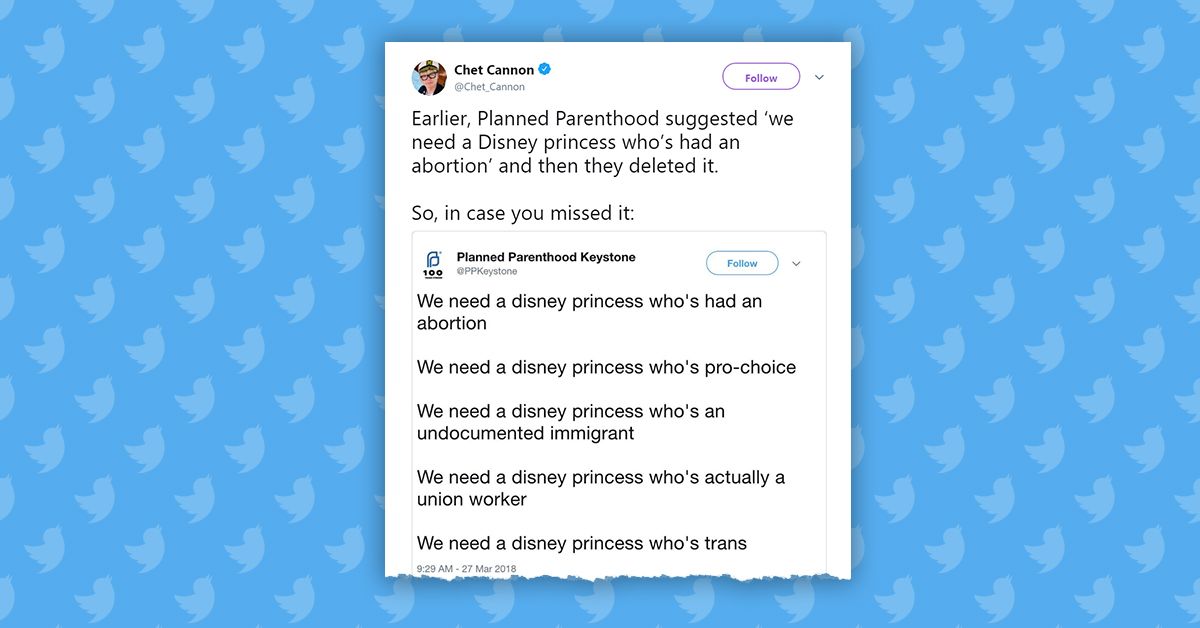 Claim:
A Planned Parenthood affiliate published a tweet opining that there should be a Disney princess who had an abortion.
Rating:

Earlier, Planned Parenthood suggested ‘we need a Disney princess who’s had an abortion’ and then they deleted it.

So, in case you missed it: pic.twitter.com/BQV5lBsVNi

We need a disney princess who's had an abortion

We need a disney princess who's pro-choice

We need a disney princess who's an undocumented immigrant

We need a disney princess who's actually a union worker

We need a disney princess who's trans

We Need a Disney Princess refers to a [text-only meme known as a] snowclone popular on Twitter in which people sarcastically advocate for a Disney princess with a certain characteristic. The snowclone is a parody of calls for certain types of representation in Disney films.

Planned Parenthood believes that pop culture – television shows, music, movies – has a critical role to play in educating the public and sparking meaningful conversations around sexual and reproductive health issues and policies, including abortion. We also know that emotionally authentic portrayals of these experiences are still extremely rare — and that’s part of a much bigger lack of honest depictions of certain people’s lives and communities.

Today, we joined an ongoing Twitter conversation about the kinds of princesses people want to see in an attempt to make a point about the importance of telling stories that challenge stigma and championing stories that too often don’t get told. Upon reflection, we decided that the seriousness of the point we were trying to make was not appropriate for the subject matter or context, and we removed the tweet.

The tweet is real, but misattributed by some to Planned Parenthood as a whole, not a single affiliate in one state. Furthermore, the context of the tweet (a Twitter "snowclone" involving the phrase "We need a Disney Princess") was omitted from subsequent articles about the controversial tweet.