Did a Plane Narrowly Avoid a Fuel Tanker During a Failed Terrorist Attempt?

This nearly disastrous event didn't occur in Algeria (or any other real-world location). 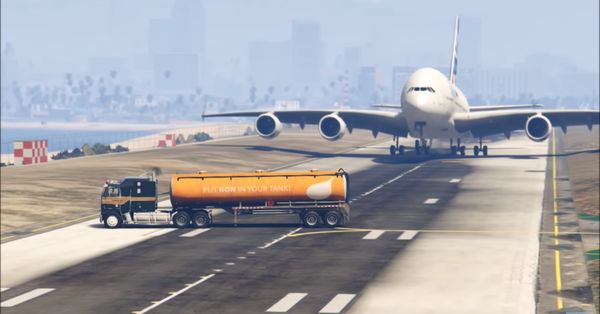 Claim:
A video shows a "failed terrorist attack" in Algiers involving an airplane and a gasoline tanker truck.
Rating:

In July 2019, a video supposedly showing an airplane narrowly avoiding a fuel tanker truck parked on the runway was circulated online as if it showed a "failed terrorist attack" in Algiers:

Terrorist attack in Algeria, which fails to work because of the pilot's immense skill pic.twitter.com/vnHXzjSULk

The video of this "failed terrorist attack" racked up hundreds of thousands of views and was even shared by Khurram Nawaz Gandapur, the Secretary General of Pakistan's Awami Tehreek political party, who praised the pilot's presence of mind in avoiding the catastrophe.

This video, however, does not capture a potentially catastrophic event. This clip was actually taken from the video game "Grand Theft Auto V."

If you watch the above-displayed video to the end, you can see some "fails" which show the airplane crashing into the fuel tanker. If this were genuine footage, we doubt that the "terrorists" would get multiple chances to rearrange the set pieces.