We will also accept the name "grolar bear." 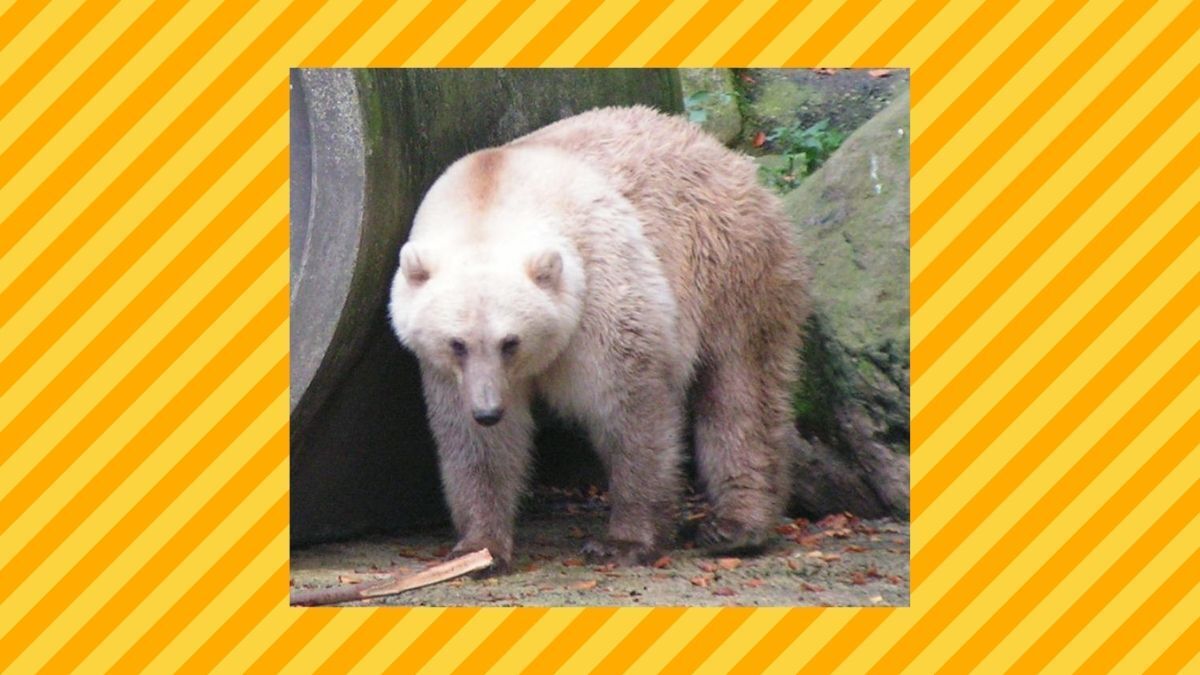 Claim:
A photograph shows a pizzly bear, the offspring of a polar bear and a grizzly bear.
Rating:

Polar bears and grizzly bears have successfully mated on a few occasions, creating a hybrid species unofficially dubbed a "pizzly bear." While the climate crisis may expedite the number of pizzly bears (the changing climate is causing grizzly bears to move north and polar bears to move south, resulting in more interactions between the species), this viral photograph that circulated in April 2021 showed a pizzly bear that was born in captivity.

In April 2021, a photograph supposedly showing a "pizzly bear," a cross between a polar bear and a grizzly bear, was circulated on social media: The animal pictured here is truly the offspring of a polar bear and a grizzly bear. While the term "pizzly bear" is often used to describe this hybrid animal, it's not an official name. These crossbreeds are also unofficially referred to as "grolar" bears.

The discovery of the pizzly bear did not happen in 2021. The first wild pizzly bear was identified in 2006 after a bear with white fur, like a polar bear, and a humped back, like a grizzly bear, was killed by a group of hunters in Iqaluit, Canada. When researchers conducted a DNA test on the bear, they found that it was indeed a cross between a polar bear and a grizzly bear.

The Associated Press reported at the time:

Northern hunters, scientists and people with vivid imaginations have discussed the possibility for years.

But Roger Kuptana, an Inuvialuit guide from Sachs Harbour, North West Territories, was the first to suspect it had actually happened when he proposed that a strange-looking bear shot last month by an American sports hunter might be half polar bear, half grizzly.

Territorial officials seized the creature after noticing its white fur was scattered with brown patches and that it had the long claws and humped back of a grizzly. Now a DNA test has confirmed that it is indeed a hybrid — possibly the first documented in the wild.

Interest was renewed in the pizzly bear in April 2021 after the Independent published a Q&A with Larissa DeSantis, an associate professor of biological sciences at Vanderbilt University in Tennessee, about how the climate crisis could lead to an increase in pizzly bears. DeSantis, who recently published a paper examining the changing diets of polar bears due to a warming Arctic region, said that we could see more pizzly bears as the habitats of polar bears and grizzly bears start to overlap. DeSantis said:

Climate change and in particular arctic warming is definitely playing a role [in creating pizzly bears]. The warming arctic is resulting in grizzly bears moving north due to warming conditions, while at the same time polar bears are having difficulty hunting from sea ice and [finding] bowhead whale carcasses where these bears engage in opportunistic mating.

The Washington Post elaborated on this topic in a 2016 article entitled "Love in the time of climate change: Grizzlies and polar bears are now mating," writing:

Textbooks say these two species aren’t supposed to inhabit the same environments. Polar bears are marine mammals; grizzlies are terrestrial. But as the Arctic warms, sea ice is shrinking and the tundra is expanding. And the bears’ disparate populations are meeting, mating and creating a new breed that’s capable of reproducing.

Bears sharing both species’ DNA have been recorded several times over the past decade. So why are these two species linking up?

It’s called flexible mate choice: The bears are mating with the best possible partners as opposed to not mating at all, and they’re mating because they share relatively close territories and the same branches of the same evolutionary tree.

While climate change is truly causing more overlap between the habitats of brown bears and polar bears, this isn't the only way that polar bears and grizzly bears come in close proximity to one another. At the Osnabrück Zoo in Germany, for example, polar and grizzly bears were kept in the same enclosure for decades, and in 2004 two grolar bears (Tips and Taps) were born. The above-displayed social media post shows one of these captive-born pizzly bears (Taps), who, as far as we can tell, is still living at this German zoo. Unfortunately, Taps' sister, Tips, was shot and killed in 2017 after she escaped her enclosure. Tips photo is included at the top of this article.

The "Osnabrücker Zeitung" newspaper reported that zoo staff shot dead the bear "Tips" after she escaped from her enclosure by breaking through fencing.

A zookeeper managed to escort a second bear, a male named "Taps," that had remained inside the enclosure, back into his pen.