Was a Pixie Skeleton Discovered in the Rocky Mountains?

A convincing depiction of a pixie skeleton had some social media users curious about real-life fairies. 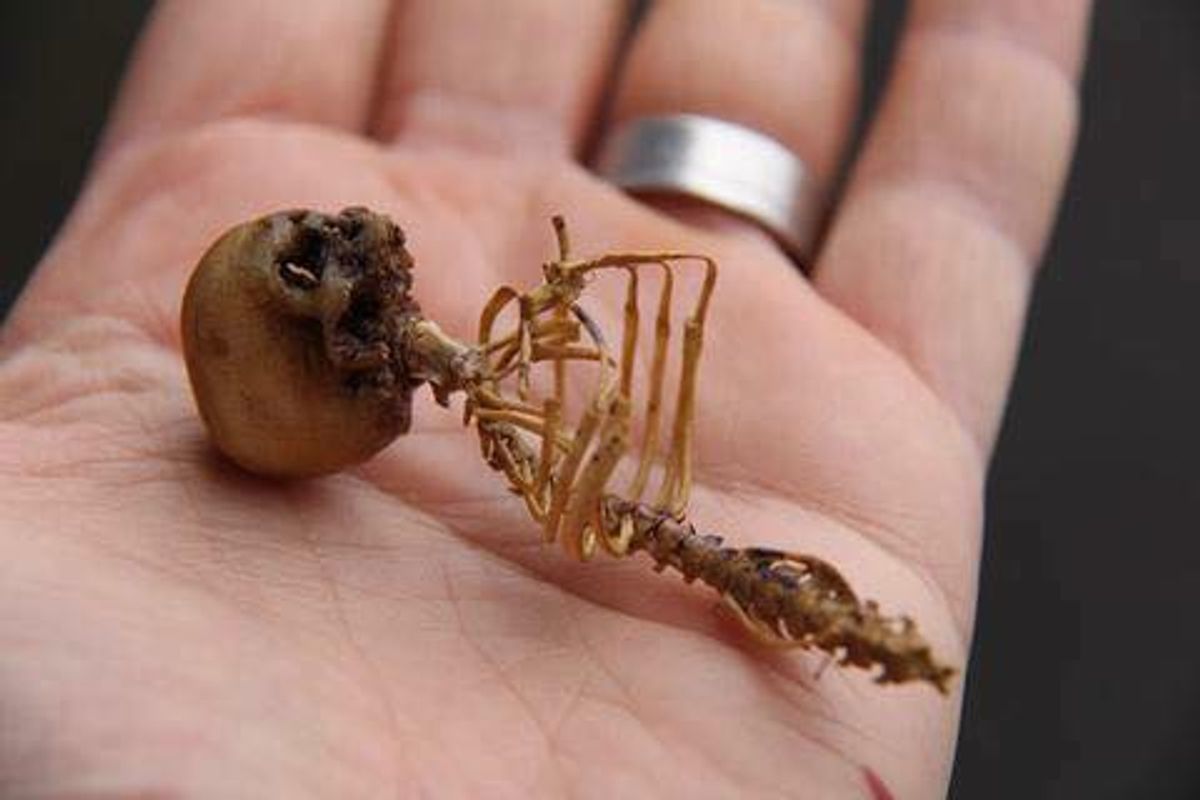 An image supposedly showing a pixie skeleton is frequently shared online along with the claim that the strange remains were found in the Rocky Mountains and that "scientific tests" had concluded the bones were authentic: James Cornan of Wilmington, North Carolina, claims to have discovered the remains of a pixie in a falcon’s nest while exploring the Rocky Mountains in 2017. Scientific tests have concluded the bones are indeed real.

Although these skeletal remains may appear to be realistic, this image doesn't show a deceased pixie discovered in the Rocky Mountains.

This photograph was originally shared on the website of Dan Baines, an artist whose work centers around mythological creatures and folklore artifacts. Baines, who was responsible for a similar hoax back in 2007 about a "dead fairy," describes himself as a "full time artist and blogger on fairy folklore" on his Twitter profile and states on his website that he incorporates "forgotten folklore, grim historical events and facets of the paranormal and occult into his work."

The "pixie skeleton" image was posted to Baines' website in February 2017 along with a story that offered the artistic artifact as a genuine discovery. At the time, the images were presented as if this pixie skeleton had been discovered in England: Could these shocking images finally be proof of the existence of pixies and fairies?

Hosts of The Mystic Menagerie, a UK based podcast were puzzled when a regular listener sent in a series of images he claims were found in a protected bird of prey next in Cornwall.

In a 2018 update, Baines stated that the "pixie bones now reside in a secure facility in Germany where biological specimens that defy conventional science are stored." We reached out to Baines for more information about this pixie skeleton and the German facility reportedly holding its remains.

While Baines has yet to admit that he created this convincing artwork, his statement from 2007 about a similar fairy hoax bears repeating:

Even if you believe in fairies, as I personally do, there will always have been an element of doubt in your mind that would suggest the remains are a hoax. However, the magic created by the possibility of the fairy being real is something you will remember for the rest of your life.

Alas the fairy is fake but my interest and belief has allowed me to create a work of art that is convincing and magical. I was also interested to see if fairy folklore is still a valid belief in modern society and I am pleased to say that yes it is! I have had more response from believers than I ever thought possible.