Is This Pink Dolphin Real?

And does this mean it's a girl dolphin? 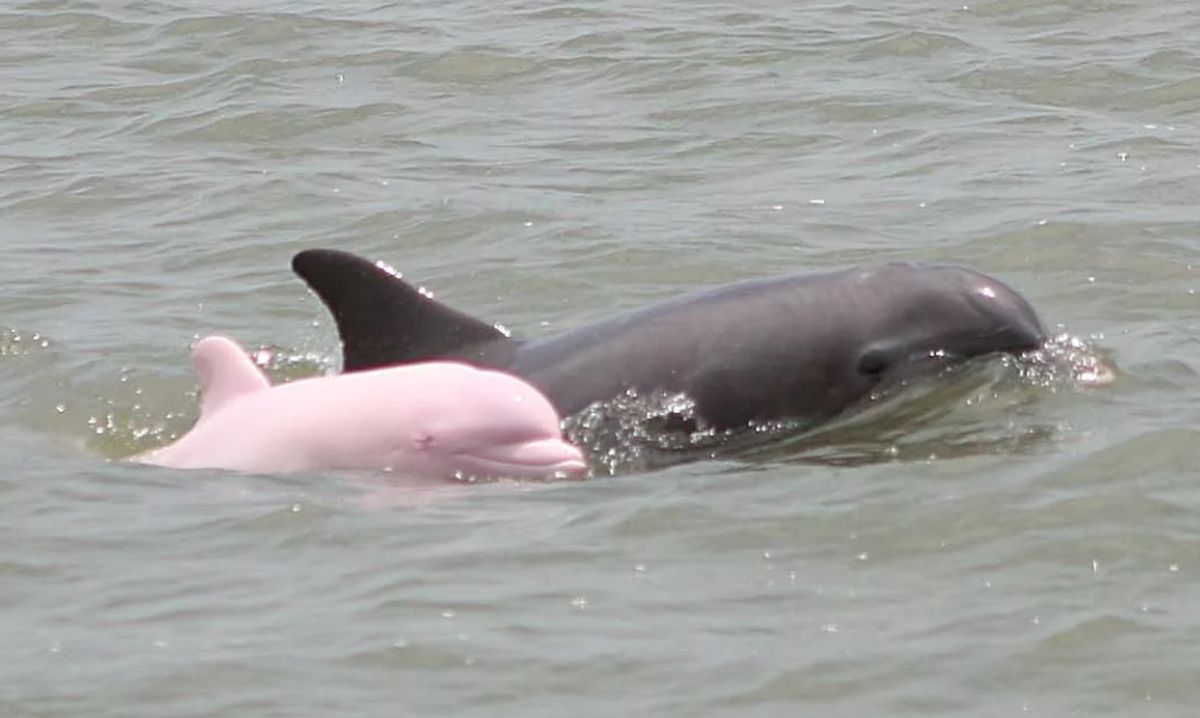 Howdy folks! These are some really neat pictures! We have had a few phone calls reporting this pink dolphin near the Cameron Ferry. Finally, someone got a few good pictures of the fine specimen! Just thought you guys would like to see. Hope all is well on your end! Take care! The photographs displayed above were taken on in Calcasieu Lake, Louisiana. (Calcasieu Lake is just east of the Texas-Louisiana border and connects to the Gulf of Mexico.) The pictures of the pinkish dolphin calf were captured by Rue of the Calcasieu Charter Service, who described his encounter with the unusually-colored animal for ESPN:

I just happened to see a little pod of dolphins, and I noticed one that was a little lighter," said Rue, who was fishing just south of Lake Charles. "I shut down and kind of waited around because I wanted to verify what I had just seen."

They waited for the pod to resurface and after a couple of minutes, Rue confirmed that he wasn't crazy. Much to the delight of the guests, who thought they were done, he had spotted a pink dolphin.

"It was absolutely, stunningly pink," Rue said. "I had never seen anything like it. It's the same color throughout the whole body. It looks like it just came out of a paint booth."

The calf's pinkish appearance was likely produced by blood vessels underneath its relatively thin layer of blubber which create a pinkish-red hue that would ordinarily be masked by a typical dolphin's gray coloration.

According to marine biologist Dagmar Fertl, this event was only the third reported sighting of an albino bottlenose dolphin in the Gulf of Mexico (going back to 1994), and the fourteenth spotting anywhere in the world (the first coming in 1962). Biologists speculate that, in addition to the rarity of their birth, the scarcity of albino bottlenose dolphins might be due to their having poor eyesight, increased sensitivity to sunlight, and a coloration that provides poor camouflaging, factors which could significantly decrease their chances of reaching maturity.

Additional photographs of this pink dolphin can be viewed here.