Does This Photograph Show Children Playing 'Pin the Molotov Cocktail on a Cop Car?'

Is this picture an example of how "dangerously violent" the left is? The timing and location are key details. 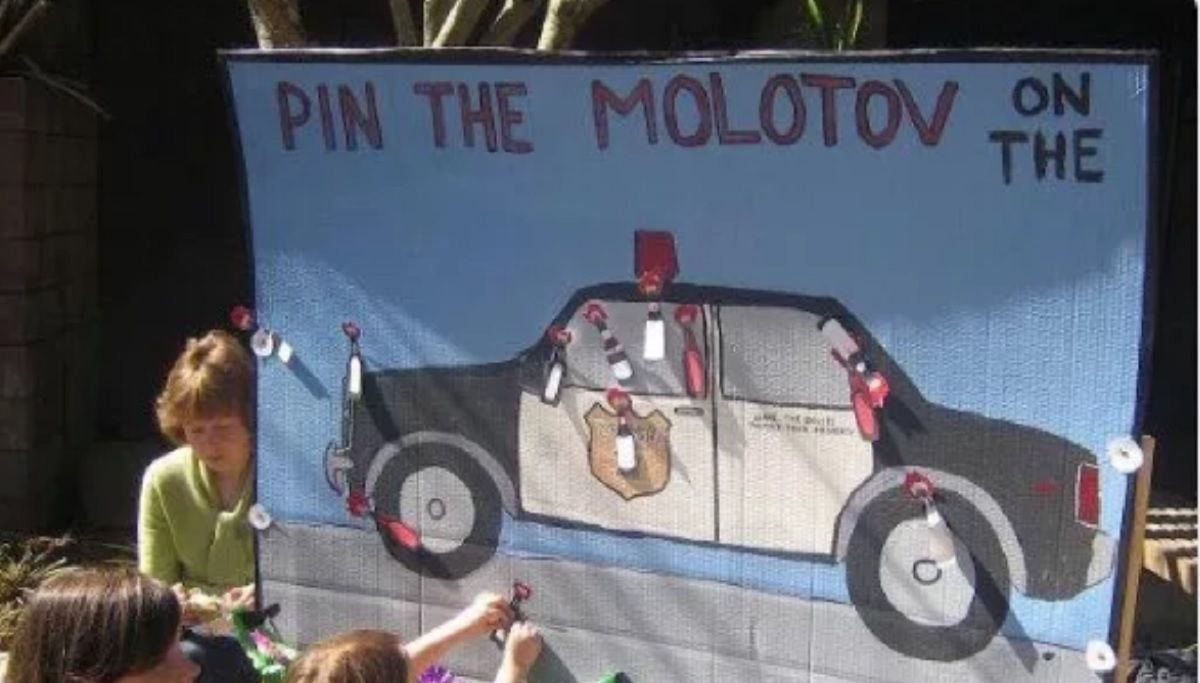 Claim:
A photograph shows a child playing "pin the Molotov cocktail on the cop car" at an anarchist book fair.
Rating:

A photograph showing a game of "pin the Molotov cocktail on the cop car" is real.

In October 2018, after an anti-Semitic act of mass murder in Pittsburgh; a series of mail bombs sent to Democratic politicians, liberal fundraisers, and news organizations; and the apparent racially-motivated killing of two black men, many news outlets and politicians expressed concern that President Trump's rhetoric was playing a part in the rise in hate crimes and right-wing terrorist attacks in the United States.

Trump had, after all, promoted anti-Semitic conspiracy theories targeting George Soros, called his political opponents an "angry left-wing mob," and attacked the "fake news" media as the "enemy of the people."

Trump's defenders rejected this argument, however, and claimed that it was actually liberals who had been inciting violence. Radio Host John Cardillo, for example, shared an image which supposedly showed children engaged in a game of "Pin the Molotov Cocktail on the Police Car" and claimed that it demonstrated "how dangerously violent the left is": This photograph is genuine, but when Cardillo stated that it was taken on March 18th, he omitted the year from that date: 2006, not 2018.

While Cardillo may not have intentionally misled his followers by not explicitly noting that the picture more than a decade old (he wrote on Twitter that "the year is irrelevant. It happened"), this photograph was picked up by other social media users and shared as if it were taken in 2018. Others additionally (and falsely) insinuated that the image showed a teacher playing the game with her students, and that Democratic leaders had expressed their support for this sort of activity.

This photograph was taken at the "Anarchist Book Fair" in San Francisco in March 2006. It is available via the web site ZombieTime, where it is presented with the following caption: "Speaking of which (nihilism): outside, an anarchist mom was encouraging her young daughter to play a game of 'Pin the Molotov on the Cop Car.'"

The display was also photographed at the same book fair in 2005.

Although the photograph may be real, it likely isn't the best example to use when comparing the influence of the left's rhetoric with that of President Trump's. For starters, this picture was taken at a book fair which reportedly has an average attendance of only a few thousand people. Second, this photograph was taken at an "anarchist" event and does not reflect an activity condoned or promoted by mainstream Democrats. The words of President Trump, on the other hand, routinely reach millions of people, and as he is President of the United States, his message is (at least) tacitly endorsed by the Republican party.