Yes, a Pilot Really Did Survive Being Sucked Out of an Airplane in 1990

For once, social media posts actually understated the miraculous and dramatic story of British Airways Flight 5390. 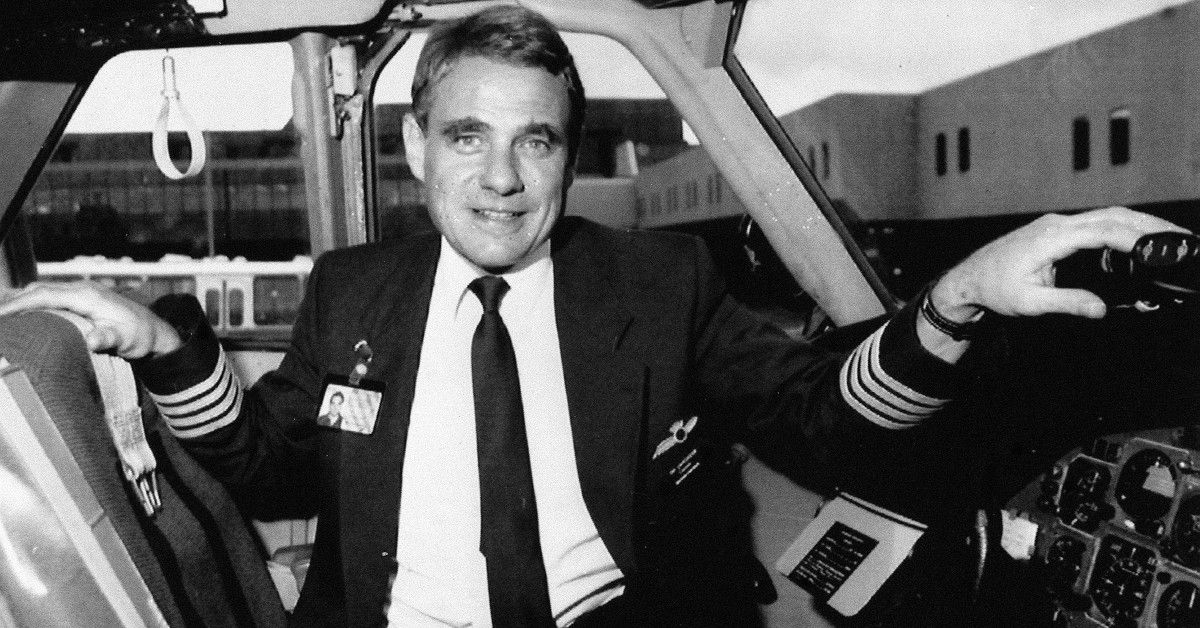 Pilot Timothy Lancaster, who survived being almost sucked from the cockpit of his plane, returning to flying at Birmingham airport. (Photo by PA Images via Getty Images)

Claim:
In 1990, a British Airways flight crew saved dozens of lives by holding on to a pilot who was sucked halfway out of an airplane after explosive depressurization.
Rating:

In early 2022, an old story about an extraordinary mid-air near miss reemerged on social media. For example, on Feb. 10, "Historic Photographs" wrote on Facebook:

In 1990 the captain of flight 5390 Timothy Lancaster got sucked out of his own plane when the window of the plane fell off. The crew held the captains legs for 30 minutes while the plane performed emergency landing. Everyone survived. Here is a picture of the captain in a hospital few days later. In 1990, a badly installed window blew out of a BA flight from the UK to Spain, causing the captain to be sucked halfway out at an altitude of 17,000 feet. The crew had to cling on to the captain's legs for over 30 minutes while emergency landing. All survived.

These popular social media posts referred to a real incident with a high degree of factual accuracy. The incident in question lasted 22 minutes rather than 30, but aside from that rather minor exaggeration, the posts accurately described the following key facts: On the morning of June 10, 1990, an improperly installed flight deck (cockpit) windscreen blew out during British Airways (BA) Flight 5390, causing explosive depressurization and sucking the pilot, Tim Lancaster, halfway outside the plane. Crew members did indeed prevent him from being blown entirely out of the plane by holding him by his legs, and everyone on board survived after an emergency landing. We are issuing a rating of "True."

What Happened to Tim Lancaster During Flight 5390?

In February 1992, the U.K. Department of Transport published an authoritative, 62-page report on the incident, which can be read in full here. While social media posts captured some of the core facts, those posts actually tended to understate the near-miraculous nature of Lancaster's escape from death or serious injury, and the official report contains some truly extraordinary details. The following summary is paraphrased from that 1992 report, unless otherwise stated.

BA Flight 5390 departed Birmingham, in central England, at 7:20 a.m. on June 10, 1990, headed for Malaga, in southern Spain. On board the British Aircraft Corporation (BAC) One-Eleven jetliner, built in 1977, were 81 passengers and six crew members, including:

After a smooth take off, Lancaster unbuckled his seatbelt and switched on the autopilot. However, at 7:33 a.m., as the aircraft passed over Didcot in Oxfordshire, 55 miles west of London, at an altitude of 17,300 feet, the pilot's windshield blew out, causing sudden cabin depressurization and sucking Lancaster out the window. Government investigators would later conclude that the windscreen had been replaced just 27 hours earlier, but most of the bolts used were inappropriate.

It is not entirely clear why Lancaster was not instantly sucked all the way out the window but, remarkably, it appears to be the case that one or both of his feet happened to be temporarily stuck under the control column — an extraordinary twist of fate that saved Lancaster's life and, as we will explain later, potentially prevented a complete catastrophe.

That initial explosive decompression, which lasted between 1.13 and 1.46 seconds, caused condensation mist and swirling winds to rapidly fill the flight deck, and left Lancaster suspended by his legs while airflow outside the airplane pinned his torso and head against the front of the airplane.

Third steward Ogden and purser Heward reacted quickly. While Ogden rushed over to Lancaster and grabbed him by the waist, Heward removed part of the flight deck door — which had been blown off in the initial force of the decompression — from the control column, allowing co-pilot Atchison to take control of the aircraft and attempt to arrange an emergency landing with local air traffic control.

Then, while second and fourth stewards Rogers and Prince reassured the passengers, Heward reentered the flight deck and helped Ogden hold on to Lancaster's waist and legs. Ogden, exposed to biting winds and air temperatures of -17° celsius (just over 1° fahrenheit) was rapidly developing frostbite and becoming exhausted, so Rogers took over.

The crew would later tell investigators that during this time, they all assumed Lancaster was already dead, and were relieved to discover he had survived when they saw him kicking his feet outside the aircraft, several minutes later. Interviewed for a later documentary film, Lancaster himself said he had managed to twist his torso around to face the inside of the airplane, so that he could breathe, but quickly lost consciousness and remembered nothing of the rest of his ordeal, until he woke up in hospital.

Setting aside humanitarian and ethical considerations, letting go of Lancaster could have proven catastrophic, if his body subsequently caused damage to the wing or engine of the aircraft. As it turned out, Rogers held on until Atchison was able to make a successful emergency landing at Southampton airport, on the south coast of England.

The official transcript of Atchison's conversation with air traffic control in Southampton contains the following remarkable exchange, as controller Chris Rundle attempts to clarify the nature and extent of the emergency facing BA 5390:

In the later documentary film, Rundle reflected on the surreal nature of that conversation:

It doesn't actually happen. It's one of these things that you see in films, that happens in films, but it doesn't happen in real life...The hairs on the back of the neck go up and there's this feeling down the spine, the tingle down the spine and you think "No, it's not for real," but it's got to be.

Atchison landed the plane in Southampton at 7:55 a.m. — 22 minutes after the incident had begun. None of the passengers were injured, Ogden was treated for frostbite, cuts and bruises on his arm, and bore lasting psychological trauma from the experience. Lancaster was brought to Southampton General Hospital where, remarkably, his only injuries were bone fractures in his right arm and wrist, a broken left thumb, frostbite, bruising and shock. The following photograph was taken the very next day, June 11, 1990: Lancaster returned to commercial flying just five months later, and eventually retired in 2008. In December 1991, Queen Elizabeth II approved the Queen's Commendation for Valuable Services in the Air for the other five crew members. The citation read:

For services in saving the captain of a British Airways, by holding on to him when he was partially sucked out of the cockpit, following decompression after the windscreen blew out in flight. The...officers were in danger themselves through the effect of the slipstream.

Leadbeater, Chris. “How a BA Pilot Got Sucked out of a Cockpit Window, but Lived to Tell the Tale.” The Telegraph, 20 Nov. 2020. www.telegraph.co.uk, https://www.telegraph.co.uk/travel/news/ba-pilot-got-sucked-cockpit-window-lived-tell-tale/.