Thousands of pigeons released during the opening ceremony of the 1936 Olympic Games pooped on much of the audience after being frightened by ceremonial cannon fire.

Mostly True
About this rating
Context

Tens of thousands of pigeons were released during the opening ceremony of the 1936 Olympic Games. The claim that these birds pooped on the athletes after they were scared by ceremonial cannon fire originates with a single person: long-distance runner and WWII veteran Louis Zamperini. While it seems that some people truly got pooped on by pigeons during this incident, we can't determine just how much of the audience was covered in excrement.

As the start of the 2020 Olympics approached in July 2021 (the games were delayed due to the COVID-19 pandemic), an old meme started to make its way around social media about how tens of thousands of pigeons pooped on the audience during the opening ceremonies of the 1936 Olympic Games after they were scared by the noise of a firing cannon: Generally speaking, there is some truth to this humorous anecdote. It should be noted that the above-displayed picture actually comes from the 1952 Olympics in Helsinki, Finland, not the 1936 games in Germany.

When we first came across the pigeon meme, we had three immediate questions: Were thousands of pigeons released during the opening ceremonies of the 1936 Olympic Games? Did these pigeons actually poop on the audience? And just how devastating was this doo-doo drop?

The answer to the first question is yes, approximately 30,000 pigeons were released during the opening ceremonies of the 1936 Olympic Games. The Star Tribune reported on Aug. 1, 1936, that 30,000 pigeons would be released and cannons would fire once German Chancellor Adolf Hitler announced the start of the games: 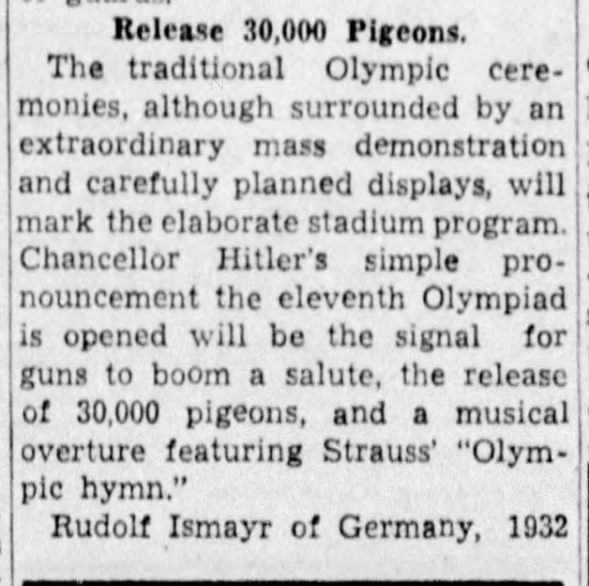 We were not able to find any newspaper articles from the 1930s that reported on a mass pooping event. To answer our second question — did the pigeons poop on the audience — we turned to a 2012 documentary produced by PBS about Jesse Owens. While the “American Experience” documentary focuses on Owens’ accomplishments and the historical impact of a Black man dominating the track and field event in front of a Germany chancellor who sought to showcase the superiority of the white race, long-distance runner and World War II veteran Louis Silvie Zamperini (whose life was turned into the 2014 film “Unbroken”) provided a humorous anecdote about another way that Hitler’s Olympics didn’t go as planned.

Here’s a transcript from the documentary:

Louis Zamperini, 1936 U.S. Olympic Team: We’re all standing on the infield, the grass, all lined up military style. They released 25,000 pigeons, they said. The sky was clouded with pigeons. And the pigeons circled overhead and then they shot a cannon and they scared the poop out of the pigeons. And we had straw hats, flat straw hats. You could hear the pitter patter on our hats. But we felt sorry for the women because they got it in their hair. But I mean it was a mass of droppings, and I tell you it was so funny.

While we do not doubt Zamperini’s telling of this event, it does not answer our third question: Just how many people were pooped on during this incident? Did they only poop on the people in Zamperini’s vicinity? Furthermore, were the pigeons really scared by the cannon fire or was this just incidental?

Unfortunately, we have not been able to find an answer to these pressing matters.

What we can say is that thousands of pigeons were truly released during the 1936 Olympics (the photo above is from 1952, though) and that this anecdote about pooping pigeons originated with an athlete who was in attendance at these games. Just how messy of a situation this really was, however, we’ll leave up to your imagination.