True or false, you'll only catch us "sky camping" inside the cabin of an airplane. 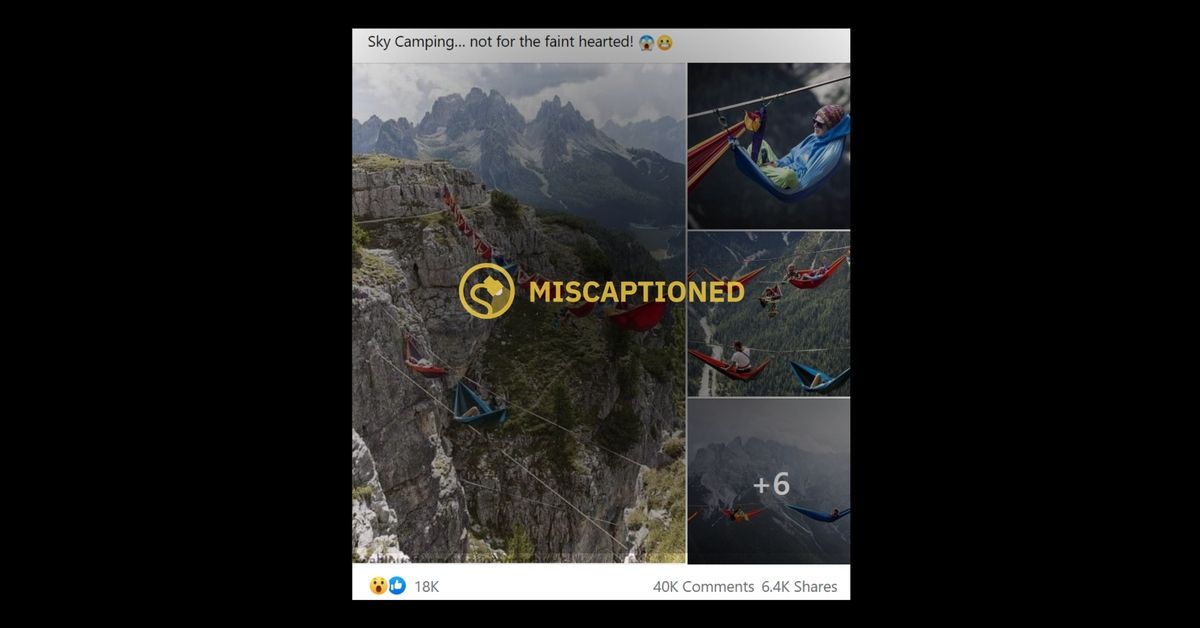 Photographs of people resting in hammocks suspended high above ground are real, however, they are not participating in an activity known as "sky camping."

In the summer of 2022, various social media users shared pictures that they claimed depicted "sky camping," or a daring campout in which people sleep in hammocks suspended high above the ground.

For example, a screenshot sent to Snopes from a popular Facebook post showed people lying in hammocks suspended from ropes high over treetops. We rated this claim "Miscaptioned" because the photographs are real, but the description is not.

The photographs were taken in 2014, and they depict athletes resting; it doesn't depict an activity called "sky camping." The athletes in the hammocks are participating in an extreme sport called highlining, which entails walking on a thin band of rope suspended at great height. As of this writing, we have found no evidence that "sky camping" is an actual activity that people participate in.

It seems, from the photographs, that prolonged camping in a small hammock suspended above a precipitous height would present a number of practical challenges. And we note that none of the photos show people actually sleeping.

The photographs were taken by a photographer from the European Pressphoto Agency. Yahoo News published the photographs in 2014, along with a story stating they were taken at Monte Piana, in the Italian Alps on Sept. 8 of that year. The article states that, "At night, they sleep in hammocks suspended thousands of feet in the air," although all of the images we have encountered were taken during daylight hours. It's unclear to us whether people actually sleep in the hammocks or simply rest between daring highline walks.

NBC News ran one photograph from the same event with a brief description indicating the highliners were simply resting, with a headline stating, "Highliners Take a Hammock Break in the Italian Alps."

Vaz, André Guedes. "Highlining, the Most Extreme Kind of Slackline, Lived in the Heights." 19 Sept. 2019, https://allaboutslackline.pt/en/highlining/.