A fake quote ostensibly uttered by the photographer who took the infamous image of Senator Al Franken and Leeann Tweeden was circulated in November 2017. 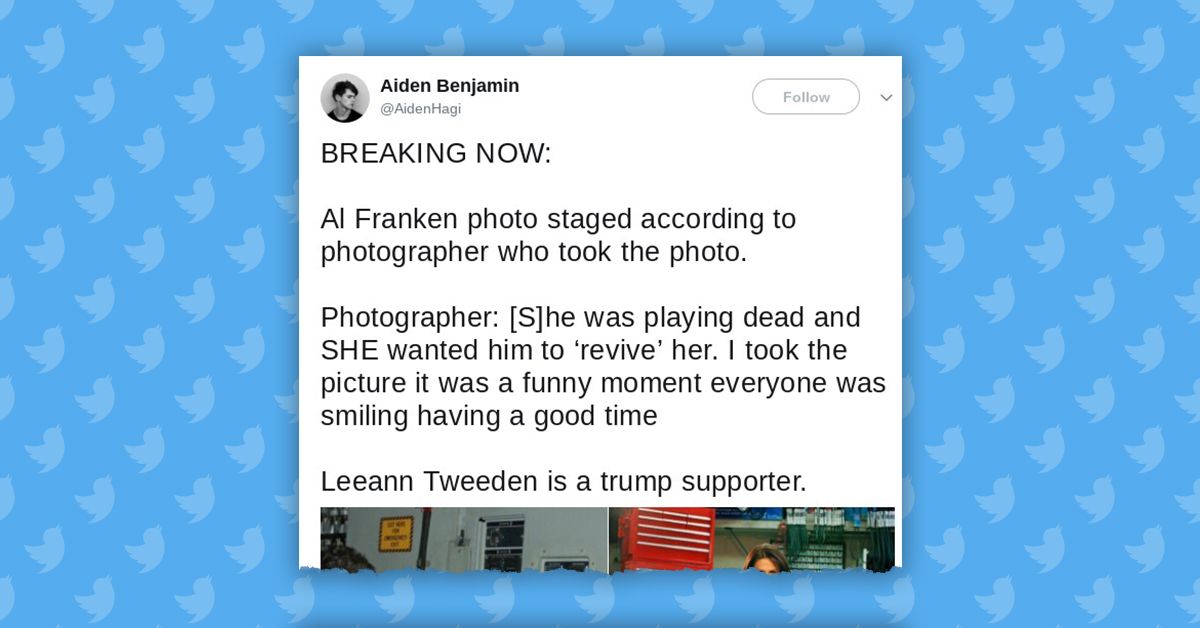 Claim:
The photographer of the infamous Al Franken image said that the moment was staged, that Leeann Tweeden "was playing dead," and that "she wanted him to ‘revive’ her."
Rating:

How do you defend the indefensible? One way, apparently, is to make up a fake quote.

In an apparent effort to discredit Leaann Tweeden, the woman who accused Senator Al Franken of groping her during her 2006 USO tour, a quote ostensibly uttered by the photographer who snapped the infamous image was circulated on social media:

BREAKING NOW: Al Franken photo staged according to photographer who took the photo.

Photographer: [S]he was playing dead and SHE wanted him to ‘revive’ her. I took the picture it was a funny moment everyone was smiling having a good time

Leeann Tweeden is a trump supporter.

This is not a genuine quote from the photographer who took the infamous picture.

This quote was posted to Twitter by "Aiden Benjamin" on 16 November 2017 along with an unrelated picture of Tweeden in a bikini: Although Benjamin claims in his bio that he is a writer of "REAL NEWS. REAL FACTS," he didn't cite any source information for this quote. In fact, when he was pressed on the issue, he pointed to Al Franken's statement of apology: Franken's statement, however, does not contain a quote from the alleged photographer. Furthermore, Benjamin seems to be conflating two separate incidents. Tweeden named two occasions in which she felt violated by Franken. One occurred during the rehearsal of a skit, and another when this picture was taken while she slept:

He repeated that actors really need to rehearse everything and that we must practice the kiss. I said ‘OK’ so he would stop badgering me. We did the line leading up to the kiss and then he came at me, put his hand on the back of my head, mashed his lips against mine and aggressively stuck his tongue in my mouth.

I immediately pushed him away with both of my hands against his chest and told him if he ever did that to me again I wouldn’t be so nice about it the next time.

I walked away. All I could think about was getting to a bathroom as fast as possible to rinse the taste of him out of my mouth.

I felt disgusted and violated.

But he didn’t stop there.

The tour wrapped and on Christmas Eve we began the 36-hour trip home to L.A. After 2 weeks of grueling travel and performing I was exhausted. When our C-17 cargo plane took off from Afghanistan I immediately fell asleep, even though I was still wearing my flak vest and Kevlar helmet.

It wasn’t until I was back in the US and looking through the CD of photos we were given by the photographer that I saw this one: I couldn’t believe it. He groped me, without my consent, while I was asleep.

I felt violated all over again. Embarrassed. Belittled. Humiliated.

How dare anyone grab my breasts like this and think it’s funny?

This image was not staged (at least not to Tweeden's knowledge or consent), nor was it taken during the rehearsal of the USO skit. Tweeden stated that this picture was taken "without my consent" and "while I was asleep."

It is highly unlikely that a genuine quote from the person who took this photograph is currently available, as the photographer's identity is unknown at the time of this writing. It was initially reported (in a since deleted tweet) that Franken's brother may have been the one who took the picture, but Owen Franken denied this.

It should also be noted that the Twitter account that posted this fake quote has pushed misinformation before. And while we can't definitively say what motivated them to spread this fake quote, we can say that pointing to a woman's sexual history or clothing choices (which this account did by including an unrelated picture of Tweeden in a bikini), is a common tactic used to prevent women from coming forward with stories of sexual abuse by laying the blame on the victim and saying, without saying, that the victim "deserved" to be assaulted.

The person who took the picture of Al Franken and Leeann Tweeden has not been identified, nor have they issued a statement regarding the incident. Which means there is no credible claim the image was staged, that Tweeden was "playing dead," or that "she wanted him to 'revive' her" in the picture. This quote was made up out of the whole cloth in an apparent attempt to discredit Tweeden and her account.