While a photograph does show a rhinoceros interacting with a zebra foal, the image doesn't tell the complete (and far less uplifting) story. 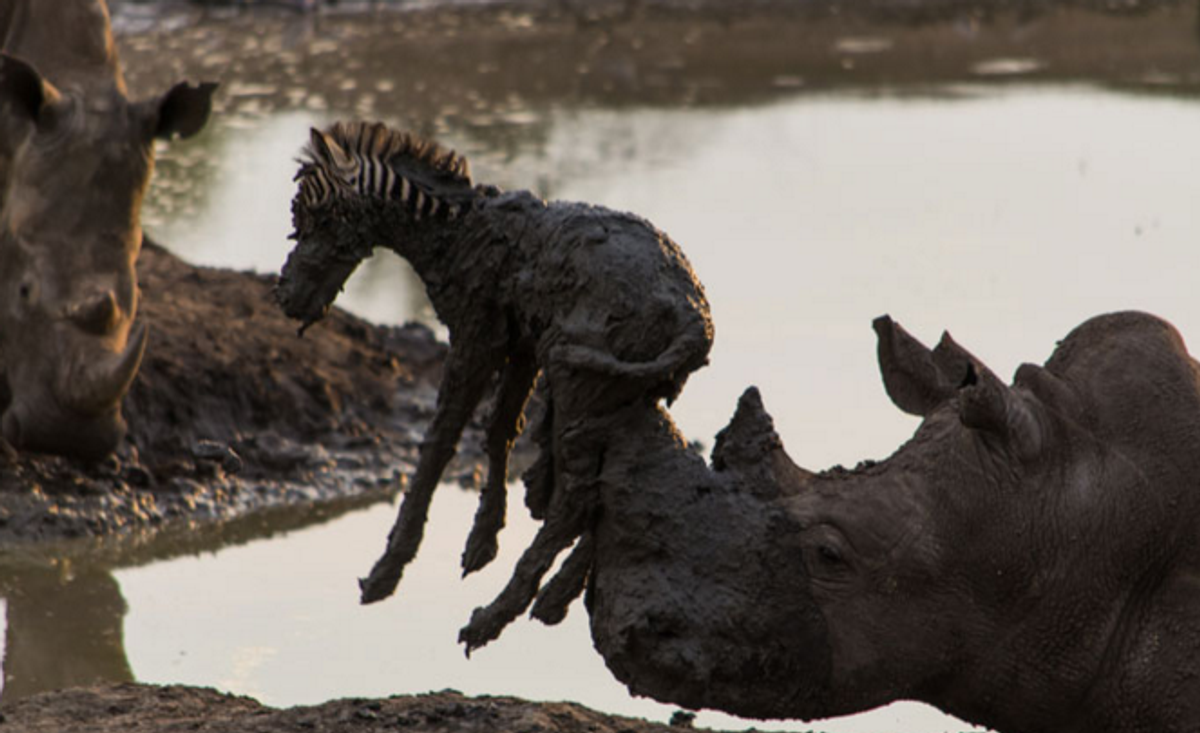 Photographs show a rhino interacting with a baby zebra.

The rhino saved the baby zebra.

A photograph purportedly showing a rhinoceros lifting a zebra foal out of the mud has been circulating around the internet since at least February 2015, when it was shared by photographer Roel van Muiden of RvM Wildlife Photography.  While the above-displayed photograph is frequently shared along with the claim that the rhino had saved the zebra foal, the real story isn't as uplifting.

Muiden shared several additional photos of the unique interaction on the web site African Geographic, as well as a detailed explanation about what was happening when the photographs were taken. Muiden said that he was taking pictures of a group of rhinos in South Africa's Madikwe Game Reserve when he noticed a floundering zebra foal:

...it took me awhile to notice the tiny zebra foal stuck in the mud. The herd was nowhere in sight so the foal must have been there for quite some time.

It's true that one of the rhinos attempted to lift the zebra from the mud, but this was most likely an act of curiosity, not a gesture of goodwill.  Additionally, the rhino accidentally killed the foal during its investigation:

The rhino bull, after being rebuffed by the cows numerous times, made his way down to the water and near to the muddy patch the foal was stuck in. The rhino started to prod the zebra with his horn out of curiosity. After a while he grew impatient and lifted the body out. The foal, still being alive but very weak, could only lift its head out of the mud. The rhino lifted the foal so quickly that it had no time to react. The rhino then dropped the foal and moved off.

He then came back for another prod and look-see. This time he lifted the zebra in a different position and his horn disemboweled the foal. Finally, after dropping the zebra again, the bull laid in the mud to roll around and almost crushed the baby zebra.

While the above-displayed photographs are real, they do not depict the heartwarming story of a rhino rescuing a zebra — instead, they depict the less inspirational (but no less interesting) story of a hapless baby zebra accidentally killed by a curious rhino.