Does a Viral Photo Show a Bright Yellow Penguin?

The bright yellow chest feathers of ordinary king penguins are thought to be an evolutionary tactic to attract a mate. 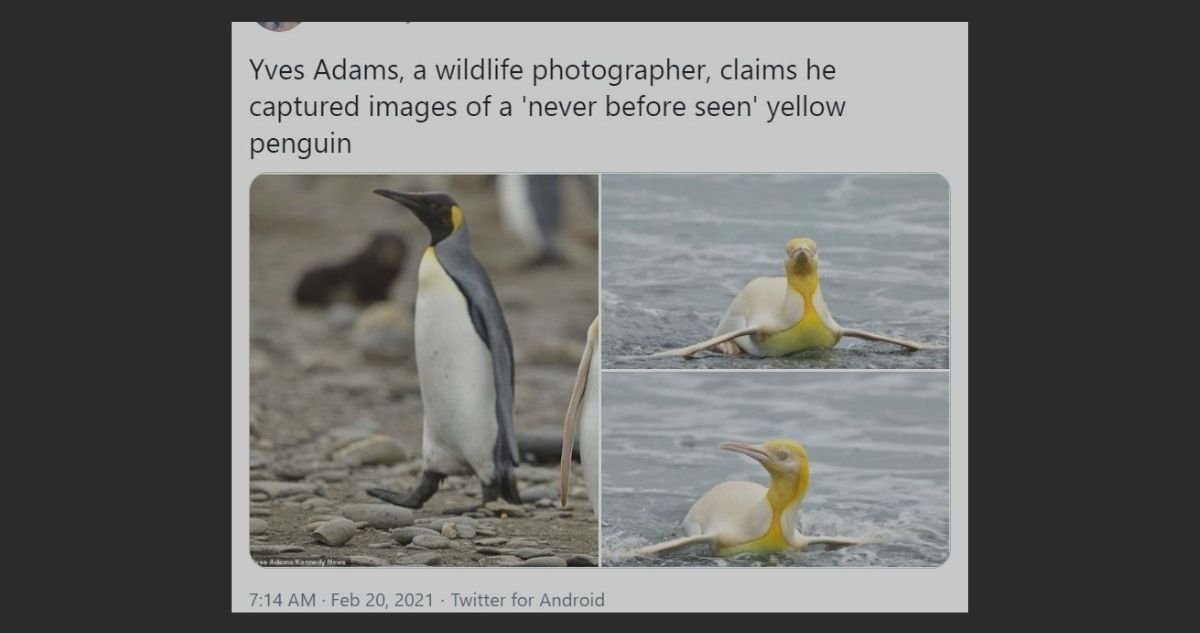 Claim:
A king penguin with highlighter yellow-hued feathers was photographed on a remote beach on South Georgia island in February 2021.
Rating:

A photograph of a king penguin captured by nature photographer Yves Adams in February 2021 showed what appeared to be a brightly hued, lemon-colored penguin. In a post published to Facebook on Feb. 18, Adams said he was unpacking gear from boats that had just landed on a remote beach on the island of South Georgia, a British territory in the southern Atlantic Ocean just north of Antarctica. The nearly 1,400-square-mile island is home to the world’s second-largest penguin, the king penguin.

In his post, Adams said that the penguin “walked up straight to our direction” in the middle of a chaotic scene filled with sea elephants, Antarctic fur seals, and thousands of other king penguins.

And the bird’s unforgettable plumage is likely the result of a rare condition known as leucism, according to Vikki McCloskey, curator of the Steinhart Aquarium at the California Academy of Science.

“It’s rare, but not unheard of,” McCloskey told Snopes.

Like albinism, leucism is a condition that affects an animal’s ability to produce pigment in the skin and hair. In particular, it prevents pigments from reaching some of the bird’s feathers while the eyes and skin retain their normal pigmentation, according to Audubon. While the bird’s unique coloration may be pleasing to the photographer’s eye, it could come at a cost in terms of the animal’s safety.

“Birds with leucism may have weaker feathers that wear out more quickly-not good if you rely on them to thermoregulate,” said McCloskey. “Also, animals that are not naturally camouflaged have more probability of being targeted by predators. This would explain why they are rarely seen in-situ, as they are probably picked off at a young age. Being part of such a large colony was an advantage for this bird.”

As far as the yellow coloration, McCloskey said that the king penguin’s chest feathers are an “advertisement of access to resources — an essential part of attracting a mate.” Brightly colored feathers are generally the result of a bird’s diet, but a 2013 study found that the yellow pigmentation in a king penguin’s feathers are genetically distinct from other molecules that color feathers and are made internally, which suggested that their unique coloration is likely an evolutionary trait to spur reproduction.

But sometimes, a little goes a long way. McCloskey said that there may be no evolutionary advantage to this photographed penguin’s brightly colored feathers.

“I can't think of an evolutionary advantage to 'sticking out like a sore thumb' in regards to predation, but I also can't claim to know what a preferred penguin aesthetic may be,” she said. “Sometimes it's all about the attitude.”