The Chilean Andes hold more than half of the world’s lithium, a metal primarily used in the production of electric car batteries. 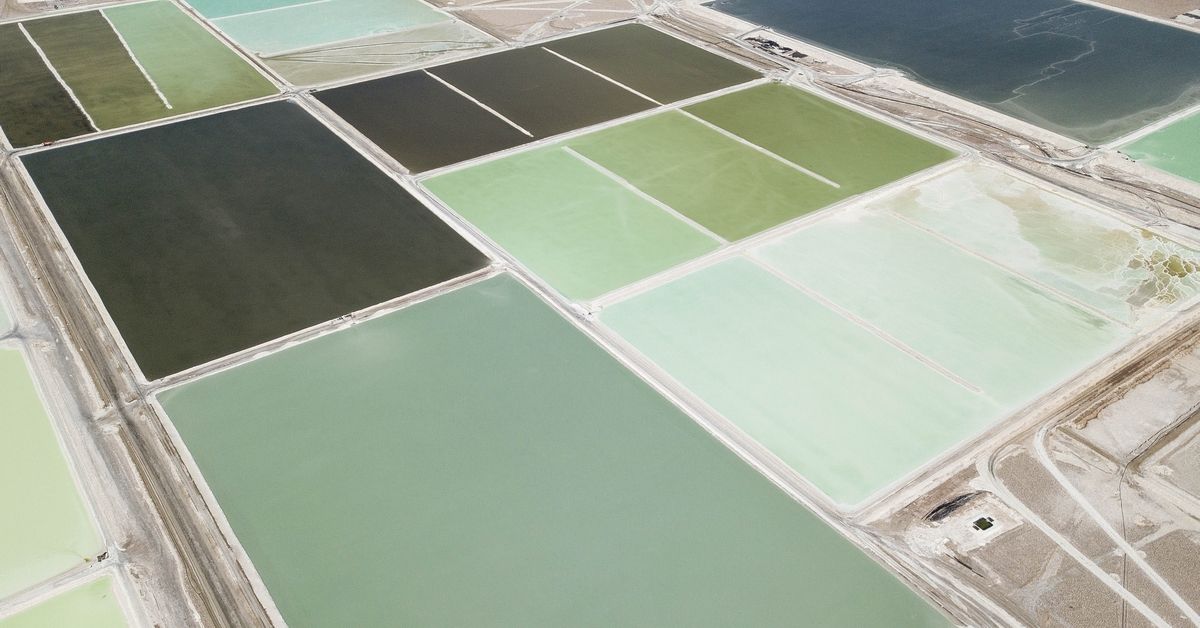 Brine pools at a lithium mine. Photographer: Cristobal Olivares/Bloomberg

Claim:
Lithium leach fields, such as the one shown in a viral photograph circulating in 2022, pose hazards to the environment and human health.
Rating:

The photograph in question is genuine. It is also true that there is evidence lithium leach fields can be damaging to the environment and pose potential health threats to both birds and humans. However ...

The toxicity levels of the substances contained in such locations are uncertain, as is the potential for the secondary contamination of human water supplies, etc. At present, the scientific literature is limited and data is not widely available, particularly in foreign countries.

A photograph shared to Twitter on Aug. 6, 2022, authentically showed a lithium leach field used in the mining and extraction of the silvery-white metal, which is a core component of batteries used in both cell phones and electric vehicles.

“This is what your Electric Car batteries are made of. It is so neuro-toxic that a bird landing on this stuff dies in minutes. Take a guess what it does to your nervous system? Pat yourself on the back for saving the environment,” wrote Keith Dickie on Twitter. As of this writing, the photograph had been retweeted more than 22,400 times, and reposted by other profiles on Twitter and other digital platforms.

The picture itself is authentic, but we have only been able to partially verify the other claims made in the tweet. A reverse image search led us to the website of German photographer Tom Hegen, who featured the photograph as part of “The Lithium Series 1.” It appears to have been taken in Chile in 2021 near the Salar de Atacama salt flats, where a lithium extraction field is situated, south of the town San Pedro de Atacama. In an email to Snopes, Hegen confirmed that he had taken the photograph, but that he had not given permission to Dickie to republish it on Twitter and could not confirm the validity of the other comments made in the tweet.

Hegen’s photographs were featured by Euronews.com in February 2022, which described his work as providing “an overview of places where we extract, refine and consume resources with his latest series exposing the ‘Lithium Triangle.’”

“This region rich with natural deposits can be found where the borders of Chile, Argentina and Bolivia meet. And roughly a quarter is stored in the Salar de Atacama salt flats in northern Chile,” wrote the publication in its eco news section. More than half of lithium extracted is used in the production of car batteries, according to the Minerals Education Coalition.

Not only do such photographs show the extent of environmental destruction related to lithium extraction, but they also highlight other potential detrimental impacts from lithium leach fields. This is particularly true given that industrial demand for lithium has significantly increased in the last two decades, in large part to support the growing demand of electric vehicles.

The Lithium Triangle of the Chilean Andes region contains more than half of the world’s supply of lithium, and in March 2022, a study published in the peer-reviewed journal The Royal Society Publishing highlighted the potentially negative impacts of lithium extraction, and provided evidence to suggest that “efforts to slow the expansion of mining and the impacts of climate change are, therefore, urgently needed to benefit local biodiversity and the local human economy that depends on it.”

This is due in large part to the arid environment of the area. Though it’s rich in lithium, it is one of the driest places on Earth, and to extract lithium, miners need a lot of water, reported Wired in 2018.

“To extract lithium, miners start by drilling a hole in the salt flats and pumping salty, mineral-rich brine to the surface,” wrote the publication.

“Then they leave it to evaporate for months at a time, first creating a mixture of manganese, potassium, borax and lithium salts which is then filtered and placed into another evaporation pool, and so on. After between 12 and 18 months, the mixture has been filtered enough that lithium carbonate — white gold — can be extracted.”

An estimated 500,000 gallons of water is used for every metric ton of lithium, which totals around 65% of the water supply. This can have an impact on local farmers, and also has the potential for toxic chemicals from the evaporation pools to leach into local water supplies.

That said, it is difficult to quantify whether the potential environmental impacts caused by lithium mining practices outweigh the long-term benefits of electric vehicles, which have been shown to cut down on fossil fuel production and greenhouse gas emissions.

Just how toxic the photographed lithium leach field ponds are is a difficult question to answer, so we have contacted the U.S. Environmental Protection Agency (EPA) in hopes of clarifying.

We do know that lithium can be used as a medication, but at certain exposure levels it can have negative health impacts, including nose and throat irritation when inhaled; a buildup of fluid in the lungs; and headache, muscle weakness, confusion, seizures, and coma. It may also affect the thyroid gland, kidneys, and heart function, according to the New Jersey Department of Health. In the U.S., waste can be tested for toxicity by the EPA. But as Boston University noted, lithium mining is "particularly difficult to oversee environmentally." A 2008 review of lithium toxicity found that at least in some cases, "lithium is not expected to bioaccumulate and its human and environmental toxicity are low." But without seeing toxicity reports of the lithium leach field featured in the photograph, we cannot definitively say just how toxic it may be, what chemicals may be present, or whether the ponds might specifically contain a "neurotoxin," as the social media post claimed.

Simply put: It's very likely that they are toxic to some degree and potentially harmful to humans or birds, but we just don't know to what extent. A 2021 study published in the journal The Extractive Industries and Society similarly concluded that there is a "scarcity of information" available, but that it is "possible to envisage" potential ecological toxicity and health hazards:

However, the impacts of lithium mining have been rarely addressed in the literature. Agustinada et al. (2018) followed a bibliometric analysis related to lithium mining and impacts, remarking that studies are scarce, especially from countries producing lithium, representing about 2% of total publications ... [and] the lack of investigation is mainly because sites are in distant locations and data is not available.

Whether it’s for copper or lithium, leach pits are indeed a challenge for migratory birds, which have been known to mistakenly land on the large bodies of chemical runoff, mistaking them for lakes or rivers. In Butte, Montana, the Berkeley Pit is a former pit copper mine that today measures one mile long by a half-mile wide. Though the pit went out of commission in 1982, its tailing pond still poses a risk for migratory snow geese. In 2016, tens of thousands of birds landed in the pit and were seen dropping dead from the sky, reported BBC at the time. Today, cannons, sirens, and drones are employed to deter birds from mistakenly landing on the toxic lake, reported Montana Public Radio.

But such deterrents are a luxury not available to tailing ponds in some areas of the world, particularly in countries that do not have extensive environmental protections in place. Some argue that in addition to extracting precious minerals for battery production, there should also be a renewed focus on recycling programs, concluded a report by the environmental group Earthworks.

“Are Electric Vehicles and Batteries Bad for the Environment?” Snopes.Com, https://www.snopes.com/fact-check/electric-vehicle-batteries/. Accessed 14 Aug. 2022.

wolfgarou. “Is Is a Lithium Leach Field. This Is What Your Electric Car Batteries Are Made of. It Is so Neuro-Toxic That a Bird Landing on This Stuff Dies in Minutes. Take a Guess What It Does to Your Nervous System? Pat Yourself on the Back for Saving the Environment.” America’s Best Pics and Videos, https://americasbestpics.com/picture/is-is-a-lithium-leach-field-this-is-what-your-t6zuuejm9. Accessed 14 Aug. 2022.