In theory, such a bird would also be able to both lay and fertilize eggs. 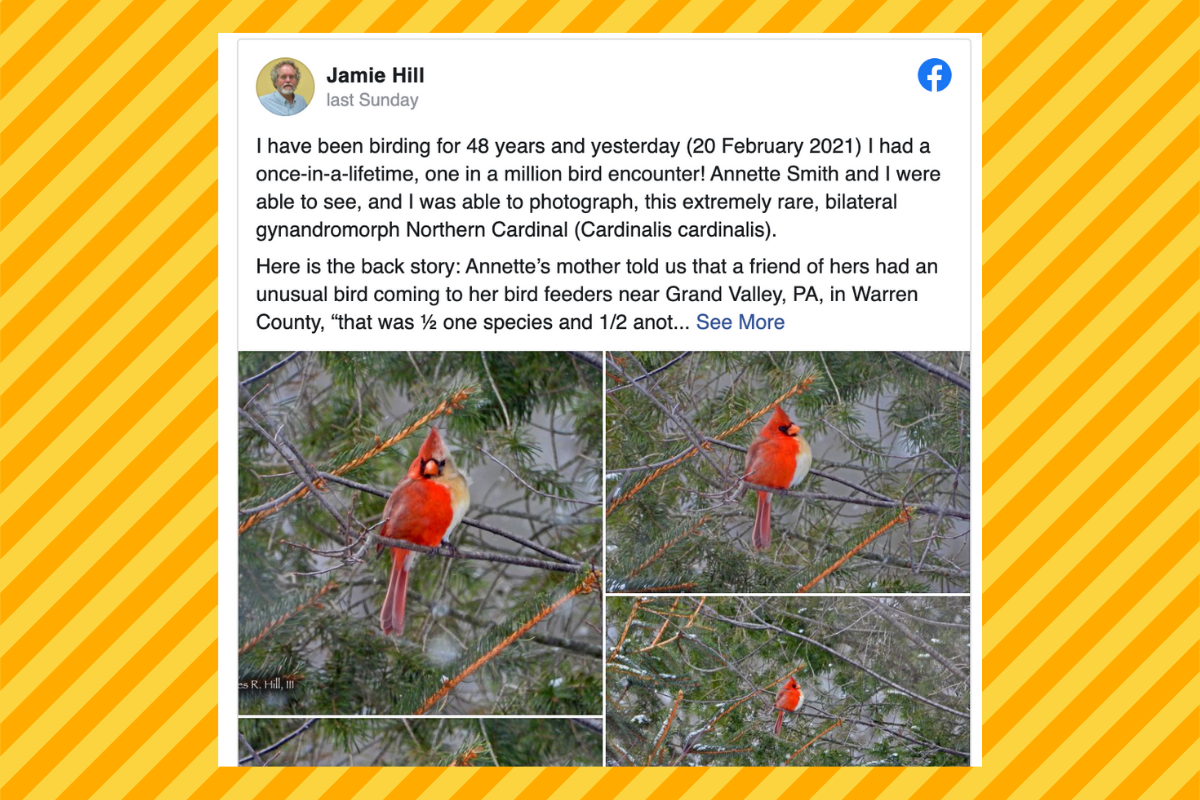 A "once-in-a-lifetime” sighting made by a Pennsylvania birdwatcher took internet flight in late February 2021 when photographs claimed to capture a half-male, half-female northern cardinal. The now-viral photographs were taken by Jamie Hill, a self-described birder of nearly five decades, on Feb. 20 in the northwestern city of Green Valley.

The bird in question is what is known as a bilateral gynandromorph northern cardinal, whose scientific name is Cardinalis cardinalis. The extremely rare bird’s unique half-red and half-white body is indicative of its condition, which means that it is genetically half male and half female.

Northern cardinals are widely distributed across the temperate ecosystems of the eastern and midwestern United States, down into Central America. There are 18 subspecies of the songbird, and in every case, males exhibit bright red plumage with a black mask on their face, while females are a light brown or light greenish-brown in color.

Gynandromorphism is a rare trait that has been recorded in a variety of species, from butterflies and spiders to zebra finches and cardinals. Organisms with the condition are physically distinguished due to sexual dimorphism, or the understanding that males and females have differences in sizes, coloration, and the sexual organs themselves. And though the cause is poorly understood, researchers theorize that the split occurs in an organism’s early development when it contains only a few cells. During this phase, an event known as mitosis occurs whereby each individual cell will divide. And in the case of bilateral gynandromorphs, it is thought that the division of cells occurs in such a way that it may cause half to be male and the other half to be female.

“Gynandromorphy has not been studied enough for us to understand its origins completely. It could arise from atypical cell division in the early stages of the development of an embryo. But genetic anomalies of other types can often have multiple causes,” explained Keith Russell, program manager of urban conservation at Audubon Mid-Atlantic, in an email to Snopes.

While spotting a bilateral gynandromorph in the wild is rare, it is not entirely unheard of. Researchers publishing their work in a 2014 issue of The Wilson Journal of Ornithology spent a total of 40 days observing one such bird in northwestern Illinois from December 2008 to March 2010. According to the scientists, the bird was never heard vocalizing and was not subjected to any “unusual agonistic behaviors” from other cardinals in the area.

A similar — if not the same — bilateral gynandromorphic cardinal was also spotted in Pennsylvania in 2019. Daniel Hooper, who was then a postdoctoral fellow at the Cornell Lab of Ornithology, told National Geographic that sex determination in birds is different than in mammals. In birds, the sex chromosomes are called Z and W (in mammals it is X and Y). Female birds have a single copy of each (ZW), whereas males have two of the same (ZZ).

“Sex cells’ nuclei, including sperm and eggs, usually have only one copy of either chromosome—males produce only Z-carrying sperm, and females produce either Z- or W-carrying eggs,” wrote the publication at the time.

“Gynandromorphy like that in this cardinal occurs when a female egg cell develops with two nuclei—one with a Z and one with a W—and it’s 'double fertilized' by two Z-carrying sperm.”

In the instance of the 2021 cardinal, it is assumed that the right red half of the bird is ZZ while the brownish left side is ZW.

Russell told Snopes there is a chance that the bird spotted in 2021 may have either been the same bird or perhaps a coincidence. Either way, there is nothing specific to the life of the northern cardinal that would make it more likely to exhibit traits of bilateral gynandromorphism.

“However, since the cardinal is a very common, brightly colored and easily observed species, when gynandromorphy occurs in this species it would be more easily detected than in a species that is less common and less conspicuously colored,” said Russell.

And it’s not just northern cardinals that have been shown to carry traits of bilateral gynandromorphism. According to Russell, there have been at least nine documented bird cases, including the rose-breasted grosbeak, house sparrow, black redstart and the domestic chicken. Museum specimens also report instances of gynandromorph orchard oriole and a black-throated blue warbler.