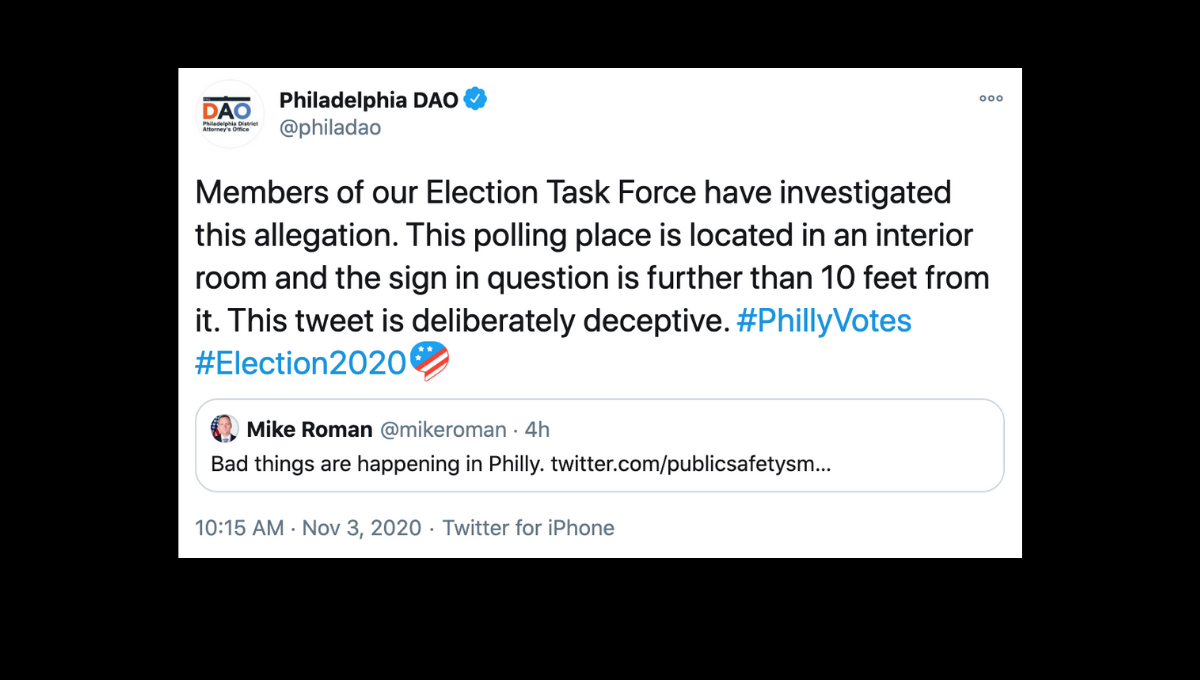 Previous Article
Next Article
Article 8 of 12 in Collection

Claim:
Does an image show an illegal sign outside a polling station in Philadelphia, Pennsylvania?

On U.S. Election Day 2020, Nov. 3, individuals in the reelection campaign of President Donald Trump promoted and shared content on Twitter that claimed to show a "violation" of electoral law in Philadelphia, Pennsylvania.

A. Benjamin Mannes, from the right-leaning Newsmax television network, tweeted photographs of what he presented as a Democratic party sample ballot (a piece of election campaigning) posted outside a polling station in Northeast Philadelphia.

Mike Roman, from the Trump 2020 campaign, promoted Mannes's tweet, adding, "Bad things are happening in Philly," an apparent implication that the presence of the sign was part of a broader pattern of Democrat-perpetrated electoral fraud. Roman's tweet was retweeted by Donald J. Trump, son of the president and one of his most prominent campaign surrogates: This claim demonstrated the following hallmark(s) of misinformation:

The presence of those traits does not necessarily mean that the claim or content is false or bogus, but it does mean you should certainly be wary of sharing it online.

Later on Election Day, the office of Philadelphia District Attorney Larry Krasner explicitly refuted the claim that the poster violated electoral law and said it was "deliberately deceptive":

"Members of our Election Task Force have investigated this allegation. This polling place is located in an interior room and the sign in question is further than 10 feet from it. This tweet is deliberately deceptive." Previous Article
Next Article
Article 8 of 12 in Collection