Did Pharrell Williams Send President Trump a 'Cease and Desist' Letter for Using His Song 'Happy'?

The songwriter and producer criticized the president for playing the hit song after a mass shooting at a synagogue in Pittsburgh, but Trump wasn't responsible for the choice of music. 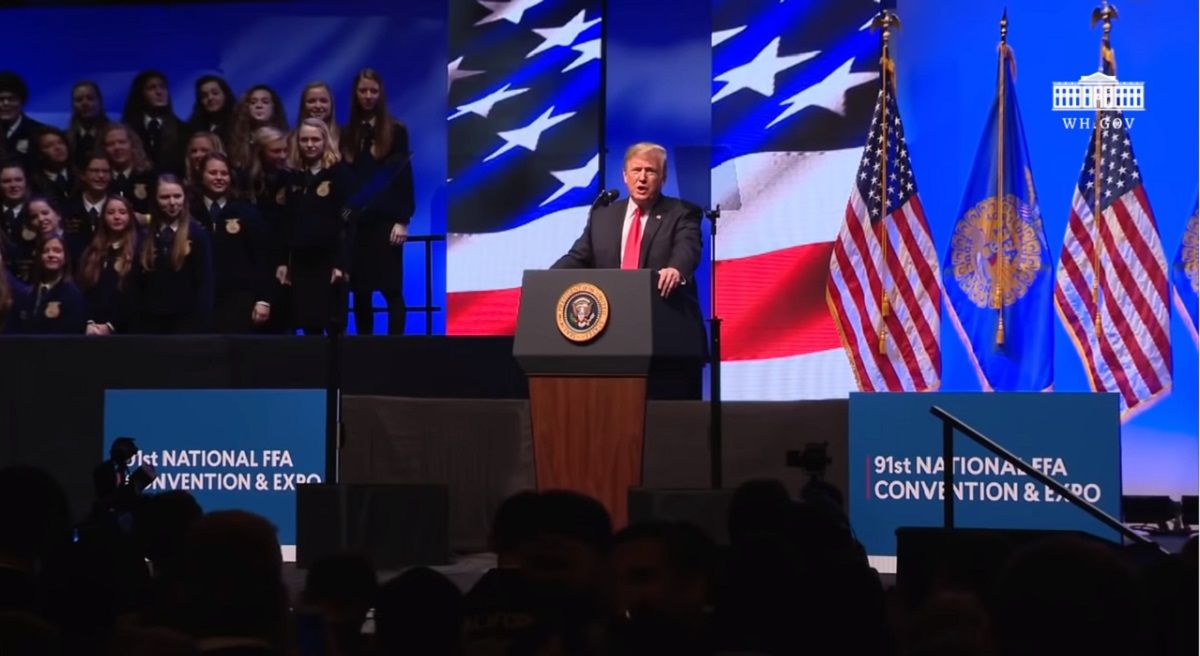 Claim:
Lawyers for Pharrell Williams sent Donald Trump a "cease and desist" letter after the president played the song "Happy" before a speech on 27 October.
Rating:

Attorneys for Williams sent a 'cease and desist' letter to President Trump after William's song 'Happy' was used at a convention where Trump spoke.

The organizers of the convention, not Trump, were responsible for the decision to play 'Happy.'

Attention also turned to the response of President Donald Trump to the shooting, in which eleven people were killed at the Tree of Life synagogue in the Squirrel Hill neighborhood of Pittsburgh on 27 October. Later that day, President Trump spoke at the annual Future Farmers of America (FFA) convention in Indianapolis, Indiana, and began his speech by talking about the mass shooting in Pittsburgh, calling it a "wicked act of mass murder" and "pure evil":

However, President Trump was criticized for joking in his later remarks that he had considered cancelling his appearance because he was having a "bad hair day." Many of those who condemned this joke did not also note that Trump had commenced his FFA speech by addressing and condemning the synagogue shooting.

In the days following the shooting and President Trump's response to it, reports emerged that singer/songwriter and music producer Pharrell Williams had been unhappy with another aspect of Trump's appearance at the FFA convention: his alleged use of Williams' song "Happy," of which the Hollywood Reporter wrote:

President Donald Trump played Pharrell Williams' song "Happy" at a Midwest rally hours after the Tree of Life congregation shooting in Pittsburgh -- and now the artist is expressing his anger over the decision through a cease and desist letter sent by his lawyer.

For their part, Slate declared in their headline that "Trump Played 'Happy' at a Rally Hours After the Pittsburgh Shooting, and Pharrell Is Not OK with It," and stated that the song was played at a rally in Illinois, not Indiana:

On Saturday, just hours after 11 people were murdered at a Pittsburgh synagogue by a terrorist targeting Jews, Trump went forward with a planned campaign rally in Illinois, playing Pharrell Williams’ “Happy” at the event. In response, Williams’ attorney has issued a cease-and-desist letter against Trump’s camp, demanding that the president never use any of Williams’ music again.

Williams' letter also formed the basis of segments on the late night shows of Jimmy Kimmel and Stephen Colbert, both of whom claimed that Trump had been responsible for the use of the song "Happy" before his speech at the FFA convention in Indianapolis:

None of these reports included any actual evidence that the song "Happy" had been played before Trump's Indianapolis speech.

It's true that Howard King, a high-profile entertainment lawyer who has represented hugely successful musical artists and acts including Metallica and Dr Dre, did indeed send President Trump a "cease and desist" letter on behalf of his client Pharrell Williams, accusing Trump of having played the song "Happy" at "a political event in Indiana."

King's law firm sent us a copy of the letter, which read as follows:

We write to you on behalf of our client, Pharrell Williams, composer and performer of the hit song "Happy." On the day of the mass murder of 11 human beings at the hands of a deranged "nationalist," you played his song "Happy" to a crowd at a political event in Indiana. There was nothing "happy" about the tragedy inflicted upon our country on Saturday and no permission was granted for your use of this song for this purpose.

Pharrell Williams is the owner of the copyright in "Happy," with the exclusive right to exploit same. Pharrell has not, and will not, grant you permission to publicly perform or otherwise broadcast or disseminate any of his music. The use of "Happy" without permission constitutes copyright infringement in violation of 17 U.S.C. Sec. 501. This also violates Pharrell's trademark rights under the Lanham Act. Demand is hereby made that you cease and desist from any further unauthorized use of Pharrell Williams' music.

The letter is undoubtedly authentic, and Williams' demand that Trump never use any of his music, on pain of legal action, is real. However, a few significant factual problems exist with the allegations contained in the letter,as well as some of the subsequent news media coverage of it.

First, neither the White House nor President Trump himself was responsible for the playing of the song "Happy" at the FFA convention on 27 October 2018. That decision was made by the organizers of the event (and generally the operators of a venue are the ones responsible for rights clearance and royalty payments associated with the use of music played during events held there).

We tracked down video footage which shows that a live, instrumental version of the song "Happy" (not Pharrell Williams' own recording of it) was played in the auditorium at the Bankers Life Fieldhouse, around 25 minutes before President Trump's speech began. The event was streamed live on Facebook by Mercedes Heiner, and the use of "Happy" can be heard in the first four minutes of that video stream:

In response to our inquiries, a spokesperson for the National FFA Organization, the organizers of the convention, clarified that the song "Happy" was part of a roster of songs which a live organist performed throughout the weekend at the convention and that it had not been chosen by the White House:

In terms of the music “Happy”, yes, our organist performed it earlier in the session as part of the music line up that we played during all of our general sessions. Please know, it was not a request by the White House, it was part of a line-up of music that we played throughout the event.

The allegation contained in Williams' letter, and the subsequent news coverage highlighted above, was that either the White House or Trump himself had "played" the song or had at least been responsible for its use. This is false: That decision was made by the organizers of the FFA convention.

Second, it's not accurate to describe Trump's FFA speech as being part of a "rally" or "political event." He was speaking in his capacity as President of the United States at the annual national FFA convention. The event was organized by the National FFA Organization and President Trump was an invited guest there; it was not a political or partisan rally. The FFA spokesperson also emphasized that point in their response to our questions.

Furthermore, some confusion was evident in the reporting about where the song "Happy" was played. Slate wrote that Trump had been responsible for playing the song at a "campaign rally in Illinois," but this does not appear to be true.

Trump did speak at a political rally in Murphysboro, Illinois, later on 27 October, but we could find no evidence that the song "Happy" was played there despite our checking almost two hours of footage covering the period from the build-up to his speech.

During his speech to the Future Farmers of America, Trump entered to the song “Happy;” joked about cancelling tonight’s rally because he‘s having a bad hair day; and used the anti-Semitic "globalist" dogwhistle hours after a mass shooting at a synagogue.pic.twitter.com/u8ANgnWzzE

Finally, The Week magazine reported that Trump had "defended" playing the song "Happy" at the Indianapolis event, declaring "rallies are meant to be fun":

Speaking to Fox News host Laura Ingraham, Trump first defended playing the Pharrell Williams song "Happy," saying, "Rallies are meant to be fun." He doesn't believe in calling off events when tragedies occur, and stood by his decision to go to Indiana. "Frankly, I think that's the way it should be," he said. "You can't let these people disrupt more than they already have. They are disgraceful."

This was a particularly misleading passage, because although the President did make the comments attributed to him in his interview with Ingraham, absolutely no reference to the song "Happy" had occurred during the interview up to that point. Rather, President Trump was offering an explanation for why he decided to go ahead with his engagements in Indianapolis and Illinois in the wake of the synagogue shooting: