Does a Pic Show Pete Buttigieg Wearing a Breastfeeding Device?

Buttigieg has been feeding his twin babies with a bottle during paternity leave. 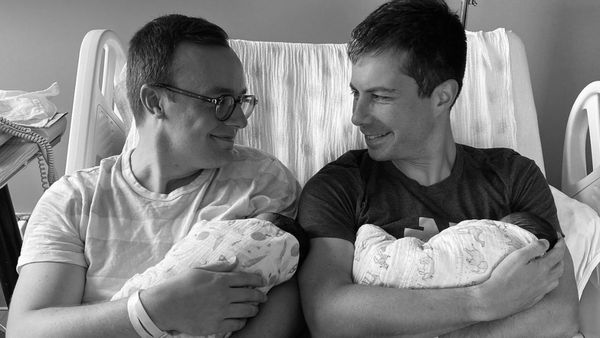 In October 2021, as U.S. Secretary of Transportation Pete Buttigieg was on paternity leave, social media users started sharing an image that supposedly showed him wearing a breastfeeding device. A Republican politician running for state representative in Indiana, for example, posted this image along with the caption: "This is the definition of pedophilia. Sickening!!!" This is not a genuine photograph of Buttigieg. Furthermore, this image does not show the "definition of pedophilia."

The above-displayed image was created by placing an image of Buttigieg's face on another person's body. Here's a look at the doctored image (left) and the original photograph (right):

While the image of Buttigieg is fake, this image does show a genuine product. This device, called the "Father's Nursing Assistant," was developed by the Japanese company Dentsu and was originally unveiled at South by Southwest in 2019. At the time, the device was just a prototype and it's unclear if this product ever made it to store shelves.

Osamu Takahashi, an art director at Dentsu, said: "Our goal was to make a wearable device that would allow a father to nurse and lull his baby to sleep in the same way as a mother. Shaped like a woman’s breasts and equipped with an internal milk tank, the product comes quite close to recreating an infant’s experience of drinking milk from his or her mother’s breast."

This doctored image wasn't the only attempt to mock Buttigieg for taking paternity leave. On Fox News, Tucker Carlson suggested that Buttigieg was on paternity "trying to figure out how to breastfeed." Buttigieg responded to the criticism in an interview on CNN, saying:

"As you might imagine, we're bottle feeding and doing it at all hours of the day and night ... I'm not going to apologize to Tucker Carlson or anyone else for taking care of my premature newborn infant twins. The work that we are doing is joyful, fulfilling, wonderful work, it's important work."

“A Desire to Create Commonplace Products Led to an Innovative Device That Lets a Father Nurse and Put His Baby to Sleep.” Dentsu, https://www.dentsu.co.jp/en/news/ideas/sxsw2019_2.html. Accessed 19 Oct. 2021.