Did Ross Perot Bequeath $100 Million to the Trump Campaign?

A purveyor of junk news capitalized on the July 2019 death of the former presidential candidate. 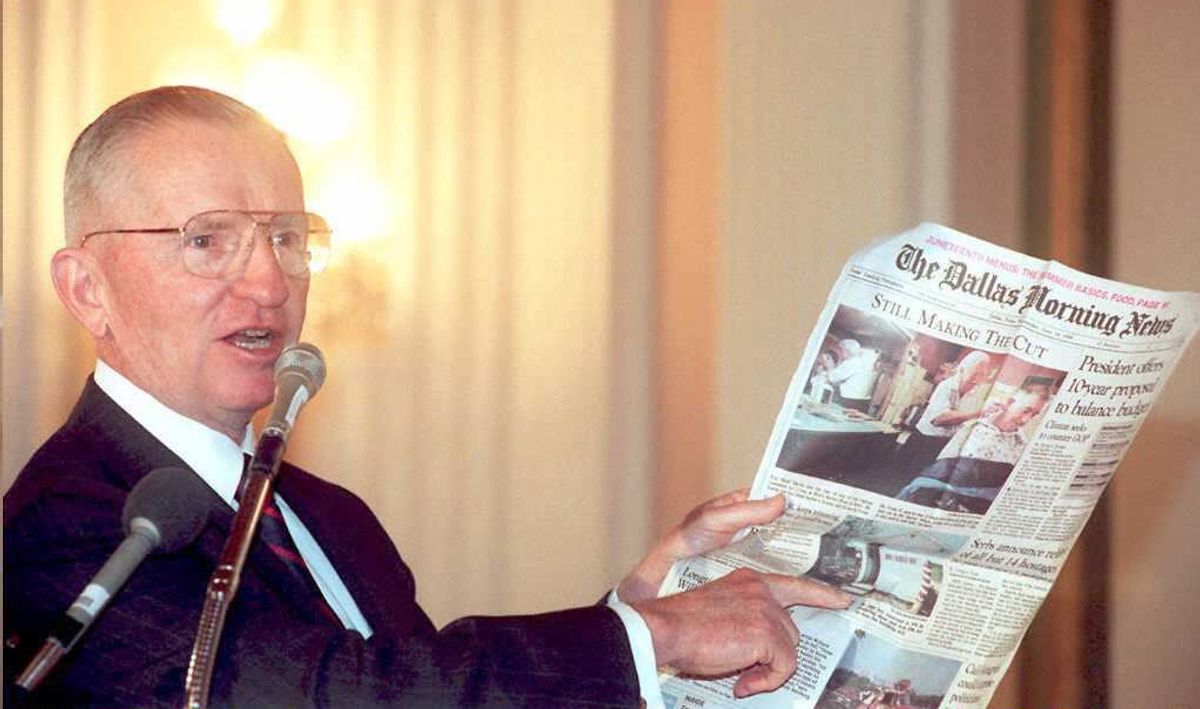 A notorious producer of junk news and misinformation capitalized on the death of former presidential candidate Ross Perot in July 2019, publishing a report that the billionaire businessman had left orders to donate $100 million of his fortune to the re-election campaign of President Donald Trump.

On July 9, PotratriotsUnite.com posted an article headlined "Ross Perot Left $100 Million to the Trump 2020 Campaign," which reported that:

Ross Perot's will explicitly instructs his 11 children to donate $9 million each to the Trump 2020 campaign. All 11 of them, Billy, Bobby, Lou, Kieth, Brenda, Gwen, Danny, Linda, Barb, Mary, Lorraine, and Joe, agreed immediately. The funds will be transferred by the end of the day tomorrow.

Perot’s family says he was an avid Trump supporter and wanted the Trump agenda to move forward. His spokesman for the past 37 years, Art Tubolls, told us that Mr. Perot was aligned with the President’s ideals:

"Ross was an opportunist, so when he saw the death of Democracy happening, he immediately backed Trump. In the end, should society break down, it's going to take a lot of money and power to keep the peace. Trump has some, sure, but families like the Perots will prosper in the New World Order."

A few clear signs indicated that the content of the article was fabricated. First, the source was PotatriotsUnite.com, which is part of a network of websites and social media accounts run by Christopher Blair, who produces a high volume of junk news and misinformation, much of it inflammatory, which he presents as "satire."

Furthermore, the article contained some blatantly inaccurate details: Perot had five children, not 11, and their names were Carolyn, Suzanne, Nancy, Katherine, and Ross Jr. The references to the "death of Democracy" and "New World Order," attributed to a Perot spokesman, are outlandish and implausible enough to raise a red flag.

The article's true nature is confirmed by the use of the name "Art Tubolls," given here to Perot's "spokesman for the past 37 years." That name is in fact a moniker used by Blair in multiple articles, and an anagram of "Busta Troll," one of Blair's favorite online aliases.

In March 2019, Ross Perot Jr. did make two $2,800 donations to the Donald J. Trump for President campaign committee, but those contributions came months before his father's death and amounted to a tiny fraction of the $9 million described in the PotatriotsUnite.com hoax.