Are 'Perfect Petzzz' Toys Made With Real Dog Fur?

The allegation that Perfect Petzzz toys use real animal fur is based on the hunch of a single social media user. 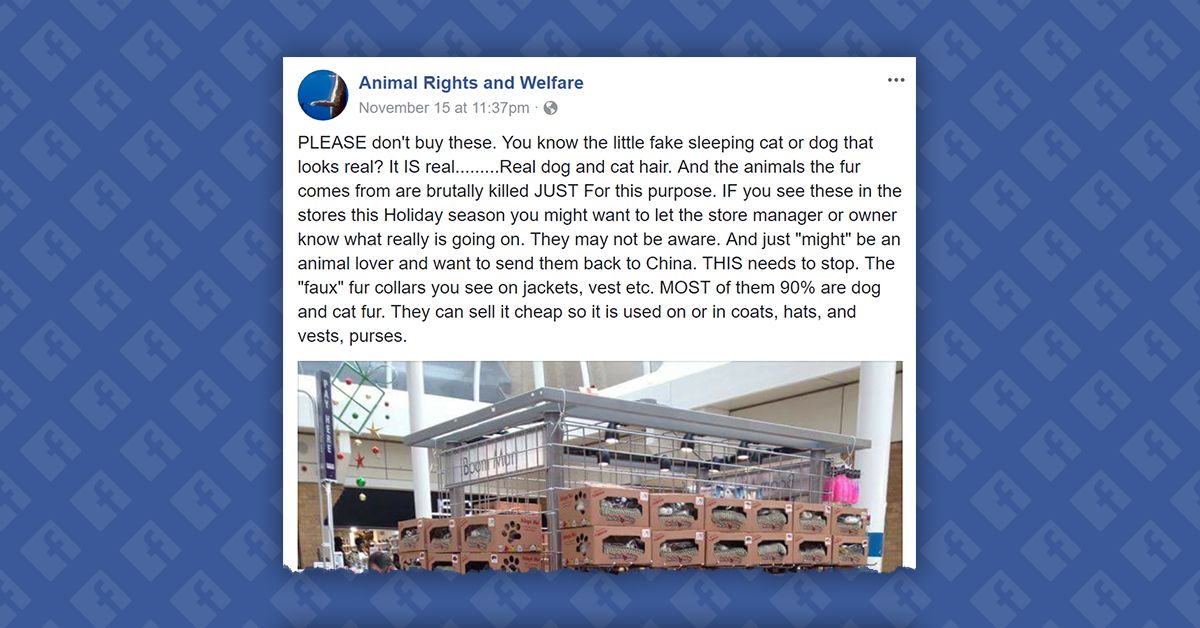 As the holiday season draws ever closer, rumors about toys go wild on social media; 2017 is no exception. In December 2017, a photograph showing a display of "Perfect Petzzz" toys (which are plush toy animals that appear to breathe while they "sleep") appeared, accompanied by a message claiming that these products are made with real animal fur: PLEASE don't buy these. You know the little fake sleeping cat or dog that looks real? It IS real.........Real dog and cat hair. And the animals the fur comes from are brutally killed JUST For this purpose. IF you see these in the stores this Holiday season you might want to let the store manager or owner know what really is going on. They may not be aware. And just "might" be an animal lover and want to send them back to China. THIS needs to stop. The "faux" fur collars you see on jackets, vest etc. MOST of them 90% are dog and cat fur. They can sell it cheap so it is used on or in coats, hats, and vests, purses.

Although it sounds like an urban legend, rumors that real animal fur has been found in products claiming to be made of faux fur are based on genuine news reports. In 2013, for instance, Neiman Marcus and two other retailers agreed to settle charges that they had falsely labeled certain products containing real fur as "faux":

According to the FTC, Neiman Marcus's website misrepresented the fur content and failed to disclose the animal name and fur country of origin for three products: a Burberry Outerwear Jacket, a Stuart Weitzman Ballerina Flat shoe, and an Alice + Olivia Kyah Coat. Neiman Marcus also misrepresented the fur content of the shoe in its catalog, at bergdorfgoodman.com, and in ads mailed to consumers.

In April 2017, Sky News reported that it had found several faux fur products that contained actual fur during an investigation:

Sky News has found four types of animal fur being sold on the British high street - but marketed to shoppers as fake fur.

A fibres expert has identified items which are most consistent with rabbit, raccoon dog, mink and cat being mis-sold to consumers as faux fur.

However, not one of these reports singled out the company Perfect Petzzz. In fact, the claim that the company used real fur in their faux fur products appears to be based on the unfounded assumptions of a single social media user.

The earliest version of this photograph and rumor that we could uncover came from a 13 November 2014 Facebook post. Although the user claimed that the displayed Perfect Petzzz were "made out of cat/dog fur!!!!!!," they revealed in the comment section that this theory was purely based on the realistic feel of the products: Of course, feeling like genuine fur is not the same as actually being genuine fur.

Perfect Petzzz addressed this exact rumor in the FAQ section of their web site, saying that while they studied real animals in order to make their product more realistic, their Perfect Petzzz are made out of nylon:

I heard a rumor that the fur on my Perfect Petzzz puppy or kitten is real fur. Is this true?

That is absolutely false. Though we did study real animals in the development of Perfect Petzzz puppies and kittens in our quest to make our product a very realistic looking pet, all of the materials are 100% synthetic. The synthetic hair on the Perfect Petzzz puppy or kitten is made from nylon.

We reached out to Perfect Petzzz, but have not yet received a response.