A Facebook user claimed Pepsi's South Bend, Indiana facility fabricated a reason to fire her husband to avoid paying for the family's benefits. 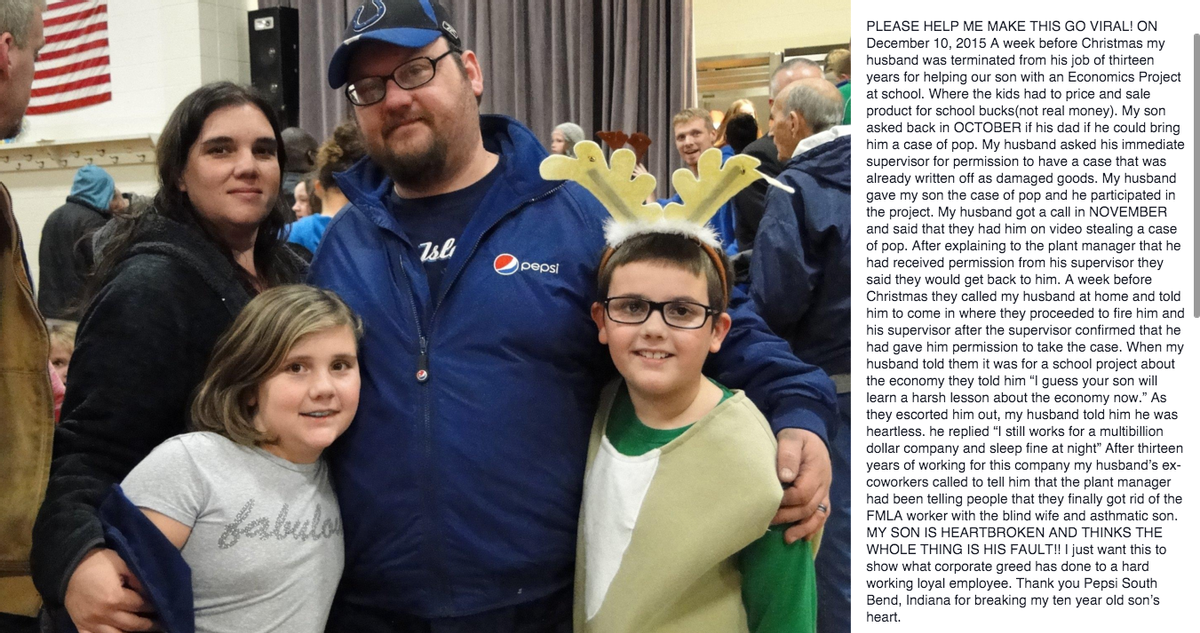 Claim:
A Pepsi employee in South Bend, Indiana was improperly terminated; while managers claimed he stole a case of soda, other employees confirmed the family's needs placed a fiscal burden on the company.
Rating:

On 28 December 2015, Facebook user Jennifer Waters Isenhart published the above-reproduced status update to Facebook; she claimed that her husband was fired from a Pepsi facility in South Bend, Indiana under contested circumstances.

PLEASE HELP ME MAKE THIS GO VIRAL! ON December 10, 2015 A week before Christmas my husband was terminated from his job...

According to Isenhart, her spouse was terminated from the Pepsi facility on 10 December 2015. She stated that the given cause for his firing was a purported stolen "case of pop," which she maintained was taken after the former employee repeatedly checked to see if he was allowed to do so. The request to take the unsaleable case of soda was purportedly lodged in October, and the complaint against her spouse filed in November. The post concluded with a claim that subsequent employee chatter revealed the "case of pop" was simply an excuse to terminate an employee whose family proved expensive for the company with respect to benefits:

After thirteen years of working for this company my husband’s ex-coworkers called to tell him that the plant manager had been telling people that they finally got rid of the FMLA worker with the blind wife and asthmatic son.

A woman who identified herself as Waters Isenhart's sister created a GoFundMe page titled "Wrongfully terminated please help" to raise money for the family in the wake of her brother-in-law's job loss.

We contacted both Waters Isenhart and Pepsi's media relations division for further information on the claim, but have yet to receive a response from either. Multiple users contacted Pepsi via social media to ask about the family's story, but Pepsi hasn't responded to those comments.

On 11 January 2016, Waters Isenhart contacted us and stated that neither she nor her husband has received any response from Pepsi regarding the claim.