Does a Video Show a Dangerous Worm in a Bell Pepper? 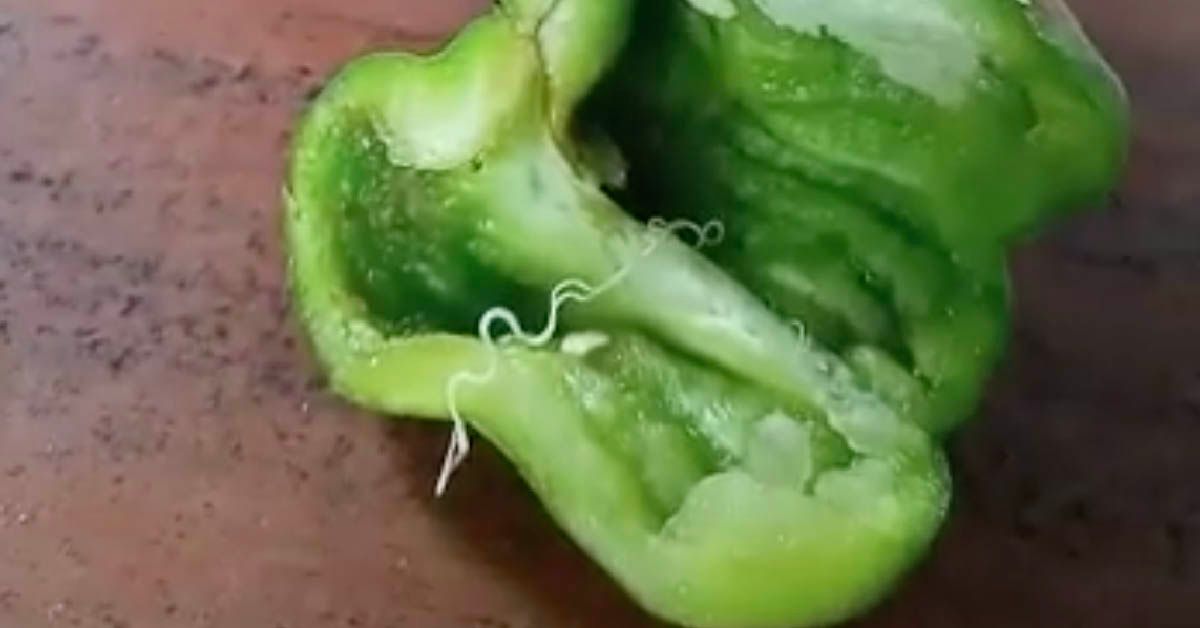 Claim:
A video shared widely in August 2019 shows a dangerous type of worm inside of a bell pepper.
Rating:

The video is authentic and does show a real worm moving about inside a green bell pepper.

The experts we consulted agreed the worm was likely to be a mermithid nematode, and therefore harmless to humans. One expert explained that even if it were a different type of worm, it did not resemble any variety known to infect humans or pose a threat to them.

In August 2019, we received multiple inquiries from readers about the facts surrounding a viral video clip that showed what appeared to be a long, stringy worm of some kind moving about inside a green bell pepper.

The video was re-posted by multiple Facebook users, many of whom warned viewers about the worm, which several of them described as potentially dangerous, and some identified as "the simla mirch" worm.

On Aug. 20, a Facebook user from Brazil posted the video, garnering almost 10 million views within a week. Her caption warned (translated from Portuguese): "Be careful with peppers ... this worm is called Simla Mirch ... a new worm which lives in wet areas of the body ... It can cause pain and ultimately lead to death":

Other widely shared videos did not specifically claim the worm could inflict pain or kill humans, but did advise viewers, in broader terms, to "be careful." Some videos identified the worm as "Simla Mirch."

The video was undoubtedly a curiosity, and it's not surprising that the unappetizing spectacle of a worm moving about inside a popular vegetable caused it to be shared widely on social media. However, some of the specific claims associated with it were inaccurate.

According to experts we consulted, the creature shown in the video is very likely to be a mermithid nematode worm (a member of the Mermithidae family and the nematoda phylum). They are parasitic to insects and spiders, but they do not parasitize humans, and they are not harmful to us.

Ben Hanelt, a senior lecturer in biology at the University of New Mexico and an expert in parasitic worms, told Snopes in an email: "This is very likely a mermithid nematode. These are not pathogenic to humans; only to insects."

John Janovy, emeritus professor of biological sciences at the University of Nebraska-Lincoln and an expert in parasite ecology, told Snopes "There is a chance" the worm shown in the video was a mermithid nematode. If so, he told us, it "is of no danger to humans."

Matt Bolek, an associate professor of integrative biology at Oklahoma State University and an expert in parasite ecology and evolution, wrote:

"As far as I can tell to me this looks typical of a mermithid nematode. These are parasites of insects and spiders and emerge from the arthropod host to seek either soil or water to develop to a free living adult worm.  Not dangerous to humans and they [humans] cannot become infected with this parasite."

Bolek said it was possible that the worm was a horsehair worm (of the Nematomorpha phylus), but this was unlikely because juvenile horsehair worms die quickly after leaving their hosts, and the adults are darker in color than the worm shown in the video, and do not move in the same way.

He told us that the horsehair worm also does not infect humans, and "there are really no other nematodes that have that coloration, move that way or are that skinny that have been reported to infect humans." So whether the worm shown in the video was a mermithid nematode (which several experts told us was likely), or another kind, it was not harmful to humans.

That refutes the rather alarming claim made in the most widely-shared posting of the video, that the worm "can cause pain and ultimately lead to death."

The life cycle of parasitic nematodes is not for the faint of heart. The worm shown in the video likely entered the pepper while it was a parasite of an insect or spider that bored its way inside. That is, the arthropod was likely carrying a juvenile mermithid nematode inside of its body, and when the worm reached adulthood, it emerged from the arthropod, killing it, and becoming "free living," that is, no longer a parasite of another animal.

The video below shows three mermithid nematodes emerging from their host, a mosquito. It is not suited to queasy viewers:

"Shimla mirch" (misspelled as "simla mirch" in some Facebook posts) is simply a Hindi name for Capsicum annuum, a species of the pepper plant and a popular way of describing bell peppers in India and Pakistan.

Some social media users who posted the video mistakenly described the worm, and not the pepper, as "simla mirch," apparently due to a misreading of earlier posts by users in India and Pakistan, many of whom wrote:

To readers in India and Pakistan, it would have been clear that these posts were warning viewers to be vigilant when using bell peppers (shimla mirch) because of the presence of a "new type of worm." However, some readers outside those countries understood "shimla mirch" to be the name of the "new type of worm" and shared the footage along with that significant inaccuracy.

The video that went viral in August 2019 is authentic and does indeed show a worm moving about inside a green bell pepper. However, according to the experts we consulted, it is likely to be a mermithid nematode, which is not parasitic of humans and does not pose a threat to us, contrary to the warnings posted on social media along with the video.

Furthermore, the worm shown in the video is not "new," although August 2019 was likely the first time that millions of viewers had come across the mermithid nematode. Finally, "shimla mirch" (misspelled as "simla mirch") is a Hindi name for the bell pepper shown in the video and not the worm itself.

Updated: [29 August] Added further expert clarification on the likely variety of the worm shown in the video.