Did Pennsylvania Lawmakers Vote to Fine Women Who Have a Miscarriage?

Democratic U.S. Senate candidate Val Arkoosh condemned Pennsylvania House Bill 118 as "unbelievable" and "outrageous" in May 2021. Do her specific claims check out? 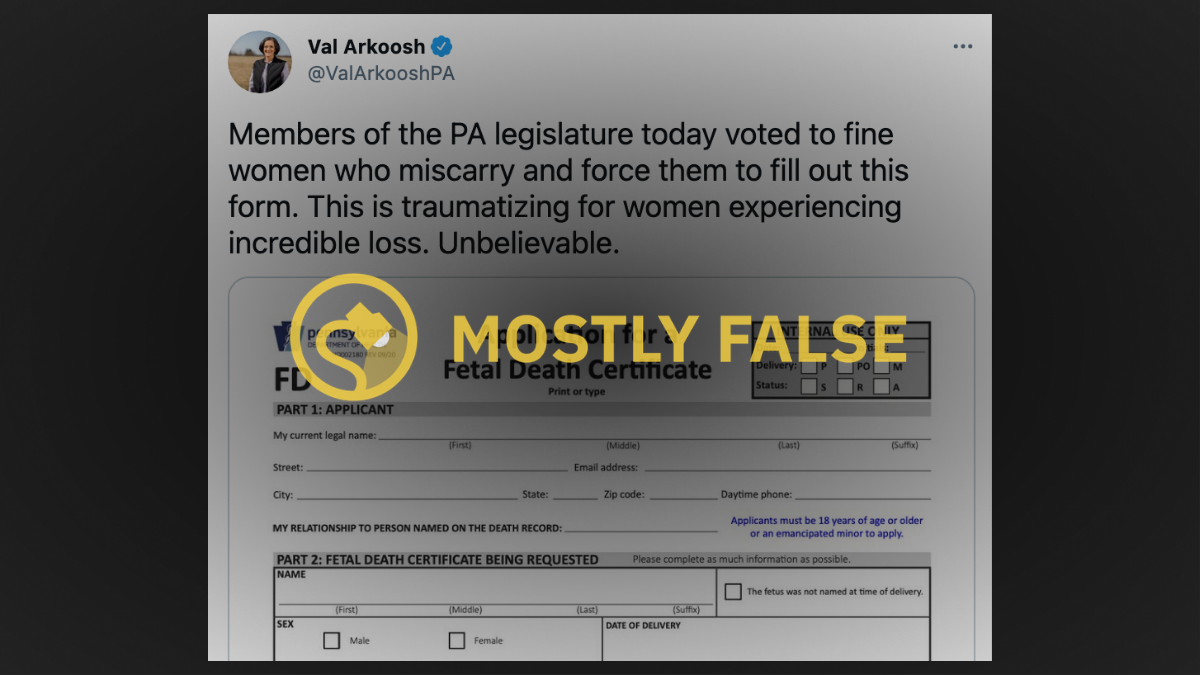 Claim:
Pennsylvania House Bill 118 of 2021 would fine women who have a miscarriage, or force them to pay for a fetal death certificate.
Rating:

The bill could greatly expand the obligation on healthcare providers to file fetal death certificates. In order to fully discharge that legal obligation, healthcare providers would, in many cases, have to consult with patients about the details of the fetal death, even if the patients would strongly prefer not to discuss fetal death certificates and similar considerations. Thus, the bill was likely to multiply the trauma suffered by patients who undergo an abortion or miscarriage in Pennsylvania.

However, Pennsylvania law does not require patients themselves to register fetal deaths, or file, obtain or pay for a fetal death certificate, and it does not fine them for having a miscarriage. The bill would not introduce such legal requirements.

In May 2021, a Democratic U.S. Senate candidate from Pennsylvania posted a widely shared condemnation of state lawmakers who she claimed had "voted to fine women who miscarry," as well as forcing them to apply for a fetal death certificate: Val Arkoosh, chairwoman of the Montgomery County Board of Commissioners and one of several Democratic candidates seeking to replace retiring Republican U.S. Sen. Pat Toomey, posted the same message to Facebook on May 25, and offered further details in a short Instagram video, in which she said the bill in question:

... effectively fines patients for having a miscarriage, an ectopic pregnancy or an abortion, by forcing them to get a $20 death certificate — a completely unnecessary requirement for families experiencing tremendous loss. This is outrageous.

Arkoosh did not stipulate the legislation to which she was referring and did not respond to an inquiry from Snopes, but she appears to have had in mind Pennsylvania House Bill 118, which was one of three pieces of legislation voted through by a Republican majority on the House Health Committee earlier that day.

HB 118 did not introduce a fine for women who have a miscarriage, nor did it introduce a requirement for them to pay for, or obtain, a fetal death certificate. The specific claims made by Arkoosh, in her widely shared tweet, were therefore inaccurate.

However, the legislation did propose introducing new requirements and expanding existing ones for healthcare providers. If implemented, HB 118 could require healthcare providers to bury or cremate any and all fetal remains after a miscarriage or abortion, no matter how early in the pregnancy, and to file a fetal death certificate with the state of Pennsylvania, on penalty of a fine or even imprisonment.

The process of filing a fetal death certificate is very likely to involve consultation and discussion with women who may strongly prefer not to take any part in discussions about such arrangements, and therefore HB 118 was likely, if implemented, to multiply the trauma inflicted on such women, in the state of Pennsylvania. We are therefore issuing a rating of "Mostly False."

What Does HB 118 Say About Miscarriages, Death Certificates?

Obligations on Healthcare Providers and Patients

Under existing Pennsylvania law, specifically Article V of the Vital Statistics Law of 1953, healthcare providers are required to take a number of actions in the event of a fetal death, whether through miscarriage, abortion, or ectopic pregnancy.

Firstly, they must file a fetal death certificate within four business days. Secondly, after the death is officially registered, they must apply for a "permit for disposal" and dispose of the remains. If an adult has died, these steps are typically taken by a funeral director, in collaboration with family members. But in the event of a fetal death, it's a healthcare provider who typically registers the death and disposes of the fetal remains.

Pennsylvania law does not require patients to file a fetal death certificate or obtain a copy of one. That's where Arkoosh's tweet was mistaken. However, the process for a healthcare provider to take those steps is likely to require the involvement of the patient, and could well be traumatizing for her.

For example, Section 501 of the Vital Statistics Law states that, in the context of preparing and filing a fetal death certificate:

Personal information concerning the deceased or the fetal death shall be supplied by the person best acquainted with the facts.

The "person best acquainted with the facts" is likely, in many cases, to be the patient herself, meaning healthcare providers — in order to discharge their own legal obligations as best they can — are realistically obliged to consult the patient and discuss the fetal death with her.

Therefore, under existing Pennsylvania law, the certification and disposal requirements associated with a fetal death do not apply where the loss of pregnancy takes place before 16 weeks gestation.

By contrast, HB 118, sponsored by State Rep. Francis Ryan, a Republican, removes that gestational age parameter from its definition of fetal death, as follows:

By removing the 16-week threshold from the definition of fetal death, HB 118 appears to require healthcare providers to file a fetal death certificate for any and all fetal remains, no matter how early in the pregnancy.

Most abortions take place early in pregnancies. In Pennsylvania in 2019, for example, almost 29,000 of the 31,000 abortions in the state that year (92%) happened before 14 weeks gestational age. Furthermore, it is estimated that around 80% of miscarriages take place within the first 12 weeks of a pregnancy (although some women undergo miscarriages at home rather than in a healthcare setting).

For these reasons, it is fair to assume that HB 118 would, if implemented, quite significantly increase the administrative burdens on healthcare providers involved in pregnancy loss, in the state of Pennsylvania. Furthermore, given the fact that filing a fetal death certificate is likely to require discussion and consultation with patients, as outlined above, it is also reasonable to assume that HB 118 would, if implemented, significantly multiply the trauma inflicted upon women who undergo a miscarriage or abortion, and do not wish to take part in fetal death registration or related discussions.

The Definition of "Fetal Death"

A measure of confusion exists over the wording of HB 118, and its consequences. HB 118 does not explicitly amend the existing definition of "fetal death" in the Vital Statistics Law, so it's not clear which definition would take precedence — the existing one, which relates only to fetal deaths after 16 weeks gestational age, or the new one, which has no gestational age parameters and would expand the certification requirements from a minority of cases to all fetal deaths.

In a news release, Ryan's office insisted that HB 118 "does not require a death certificate" and suggested that the 16-week rule stemmed from the federal U.S. Centers for Disease Control and Prevention (CDC), as follows:

... The Centers for Disease Control and Prevention (CDC) requires hospitals to record all fetal deaths occurring after 16 weeks gestation for statistical purposes. Ryan’s legislation would have no impact of the CDC’s definition of “fetal death.”

This is inaccurate. The CDC does not require recording of fetal deaths after 16 weeks, and such recording requirements vary from state to state. It is particularly unusual that Ryan would attribute the 16-week rule to the CDC, when the definition of "fetal death" in his own legislation clearly appears to have been taken from the definition found in the Vital Statistics Law — the wording is almost identical, but with the phrase "after sixteen (16) weeks gestation" removed.

Snopes asked a spokesperson for Ryan about this, and asked whether he supported keeping the 16-week floor for fetal death certificates and disposal requirements, but we did not receive a response.

Given that Ryan's definition of "fetal death" has almost the exact same wording as the one found in the Vital Statistics Law, the new definition appears to be an amendment of the old one, in all but name.

HB 118 would introduce a new requirement for healthcare providers to either bury or cremate fetal remains, no matter how early the pregnancy loss takes place, and no matter the cause.

Under existing law, healthcare providers are obliged to obtain a disposal permit after 16 weeks gestational age, but there is no specific requirement for the manner in which a healthcare provider disposes of fetal remains (provided the disposal is otherwise lawful), and such remains are sometimes disposed of as medical waste.

Specific requirements do exist, in the context of abortions, for the examination and disposal of tissue extracted during first and second-trimester abortions.

HB 118 would change that. In Section 3(b), the bill lists the obligations it would place on "health care facilities." Among them is "Cremate or inter the fetal remains."

Because HB 118 defines "fetal remains" as "the fetus expelled or extracted" in a fetal death, it would include cases of miscarriage. So Ryan's bill would take Pennsylvania law from requiring certain protocols for the examination and disposal of tissue after abortions, including disposal as medical waste, to now requiring burial or cremation for all fetal remains, at any gestational age, no matter the cause.

This burial/cremation requirement follows similar laws recently introduced in several other states, including Indiana, whose 2016 legislation was signed into law by then-Gov. Mike Pence. In 2019, the U.S. Supreme Court upheld the constitutionality of Indiana's fetal remains law, after a challenge from Planned Parenthood and others.

Importantly, the burial/cremation rule in HB 118 would also appear to trigger a requirement to file a death certificate for all fetal remains. Here's how:

Thus, HB 118 creates an obligation to bury or cremate all fetal remains, no matter the gestational age or cause of death.

However, while the requirement to bury or cremate any and all fetal remains comes from HB 118, the requirement to file a death certificate in order to get a burial permit comes from the Vital Statistics Law and, as we have already outlined, that particular legislation defines "fetal death" as only including fetal deaths after 16 weeks gestation. So again we are faced with the discrepancy between the existing definition of "fetal death" and the new one proposed in HB 118.

A person who violates the provisions of this act shall be subject to the penalties imposed under Article IX of ... the Vital Statistics Law of 1953.

Article IX of that law states, in turn, that:

... Any person who violates any of the provisions of this act ... shall ... be sentenced to pay a fine of not less than fifty dollars ($50) and not more than three hundred dollars ($300), together with costs, and in default of payment of the fine and costs, to be imprisoned in the county jail for a period not to exceed thirty (30) days.

So, under HB 118, a healthcare provider who fails to properly certify a fetal death, or disposes of fetal remains in any way other than burial or cremation, could face fines of up to $300, and if they don't pay those fines, they could in principle be sent to jail for up to one month.

On May 25, members of the House Health Committee voted 15-10, along party lines, to pass HB 118 and report it for consideration by the entire General Assembly. The bill is opposed by various pro-choice groups including the ACLU, Women's Law Project, and Planned Parenthood.