Was Mike Pence Greeted by a Widespread Display of LGBT Rainbow Flags in Iceland?

The U.S. vice president was met with protests on visits to two European countries in September 2019. 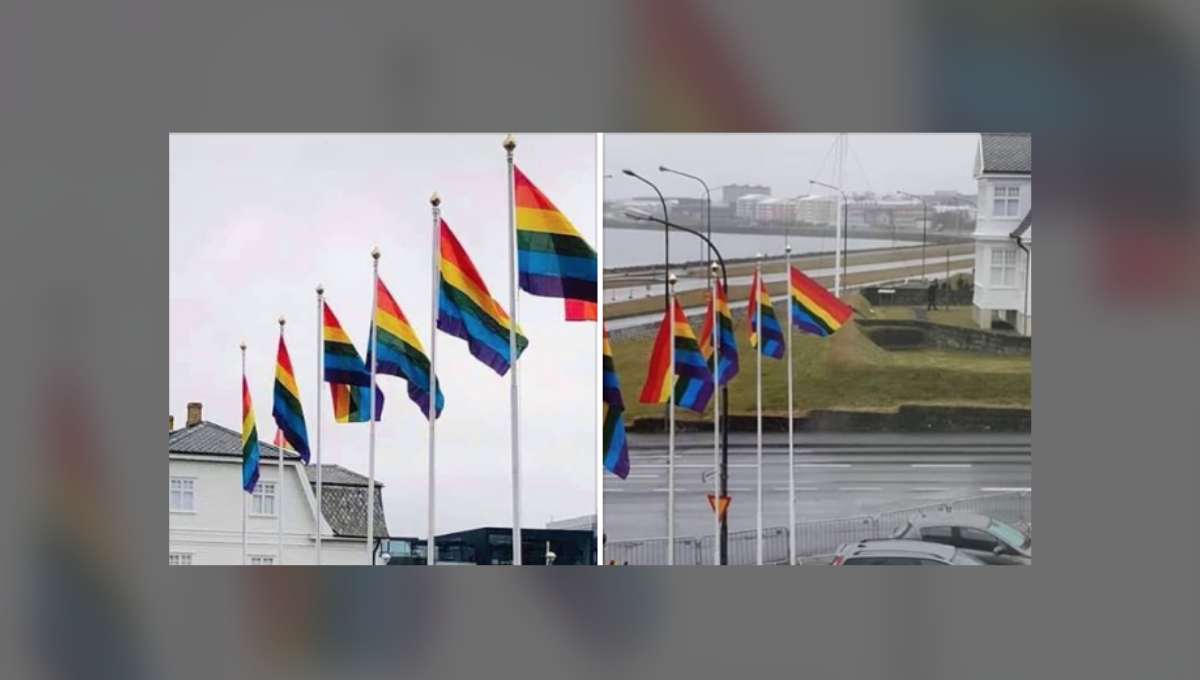 Claim:
U.S. Vice President Mike Pence was greeted by a widespread display of LGBT rainbow flags on his visit to Reykjavík, Iceland, in September 2019.
Rating:

Businesses, government buildings, and other entities in Reykjavík, Iceland, took part in a relatively widespread and striking initiative to mark Mike Pence's visit to the city by displaying rainbow flags as a gesture of apparent opposition to the vice president's past pronouncements on LGBT rights.

Claims that the flags were flown by all major companies and "everyone" were exaggerated.

U.S. Vice President Mike Pence is particularly well-known outside of the U.S. for his past pronouncements and policies on LGBT rights, and the presence of the conservative Christian former congressman prompted protests in Ireland and Iceland during his visits to those countries in September 2019.

According to one viral tweet, opposition to Pence's visit to Iceland was such that many local companies in the capital city, Reykjavík, conspicuously raised LGBT rainbow flags as a gesture of protest. On Sept. 4, the day of Pence's visit to Reykjavík, the Icelandic-American drag queen Heklina posted two photographs of a row of rainbow flags, along with the following message: "Here’s a great example of why I’m proud to be from Iceland. Mike Pence is visiting the country and everyone is outraged. Mayor of Reykjavik, all the biggest firms and companies, everyone, they’re all flying the gay flag. All Pence will see everywhere on his visit is gay gay gay."

Here’s a great example of why I’m proud to be from Iceland ??Mike Pence is visiting the country and everyone is outraged. Mayor of Reykjavik, all the biggest firms and companies, everyone, they’re all flying the gay flag. All Pence will see everywhere on his visit is gay gay gay. pic.twitter.com/XemgBk7TjU

That widely shared tweet was further promulgated when the left-leaning Facebook page Occupy Democrats shared a screenshot of it the next day:

We received multiple inquiries from readers about the accuracy of Heklina's claims and the authenticity and provenance of the photographs she included in her tweet.

Heklina's description of the flag phenomenon was somewhat exaggerated, perhaps for rhetorical effect. But Pence's visit to Reykjavík was marked by an unusually widespread initiative to fly the LGBT rainbow flag among businesses, government buildings, and other entities in the city, especially those located close to a building where Pence held meetings with local officials.

The two photographs Heklina included in her tweet were authentic. The one on the left was taken by Isold Uggadottir and shows a row of rainbow flags erected by the IT company Advania outside its building on Guðrúnartún in Reykjavík:

The location was highly significant because the white building visible in the background, across the street from Advania, is Höfði House, a historic Reykjavík landmark and the location where Pence met with Iceland's president Guðni Th. Jóhannesson on Sept. 4:

The photograph on the right in Heklina's tweet was also authentic and showed the same set of flags outside Advania's building. It appears to have been taken from an article published on the website of the Icelandic magazine Mannlíf.

A spokesperson for Advania confirmed in an email to Snopes that the company had erected the rainbow flags around 11.30 a.m. on the day of Pence's visit, adding, "We felt it was a good day to celebrate diversity." However, the spokesperson declined to either refute or confirm the widely held understanding that the flags were flown specifically in response to Pence's visit or intended as a gesture of protest against his past pronouncements on LGBT rights. The rainbow flags were not taken down immediately after the vice president's meeting across the street, and as of Sept. 6 they were still in place, according to the spokesperson.

Several other local businesses and even some official government buildings, especially in the neighborhood surrounding Höfði House, also erected rainbow flags -- or allowed them to be erected -- during Pence's visit. Some entities did this on their own initiative, but others were encouraged to do so by Tótla Sæmundsdóttir, an LGBT activist, and Katrín Oddsdóttir, a prominent Icelandic human-rights lawyer.

They distributed rainbow flags to several buildings on the day of Pence's visit, in an effort to form what Sæmundsdóttir described to Snopes as a "rainbow circle" around the location of Pence's meeting with the president of Iceland.

The following is an incomplete list of the entities that flew rainbow flags in Reykjavík during Pence's visit on Sept. 4:

Íslenska Hamborgarafabrikkan, a hamburger restaurant located across the street from Höfði House. Laugarneskirkja, a Lutheran church located about a mile east of Höfði House. On Facebook, the church wrote "Love is love":

BSRB, a public sector employees union, located around half a mile south west of Höfði House.

According to Sæmundsdóttir, the following entities also erected rainbow flags to mark Pence's visit, though we haven't yet found photographic evidence to corroborate these particular claims: Handprjónasambandið (a craft store and handknitting association), and Kaffitár (a café).

The participation of City Hall could be what Heklina was alluding to when she claimed that the mayor of Reykjavík had flown the rainbow flag. Mayor Dagur B. Eggertsson himself later retweeted Heklina's claims, but a spokesperson for City Hall told Snopes in an email that Eggertsson did not personally order the flags to be flown, though the spokesperson added "I am sure he had nothing against it." Rather, the decision to erect LGBT rainbow flags outside City Hall was taken by "officials and city staff," the spokesperson told us.

We didn't find evidence that "all the biggest firms and companies, everyone" in Iceland had flown rainbow flags to protest Pence's visit there in September 2019, as Heklina wrote in her tweet. That appears to have been an exaggeration, perhaps for rhetorical effect. However, we did find evidence of a remarkable initiative among several entities in Reykjavík —including City Hall, businesses, municipal and government buildings, and a church — to mark Pence's visit in that way.

Given that this effort was particularly concentrated around Höfði House, where Pence held meetings on Sept. 4, it is reasonable to imagine that the visual effect of the flags would have been quite striking to the vice president as he entered and exited that neighborhood.

The fact that Reykjavík City Hall, a second official municipal building and an Icelandic government agency all joined in forming the "rainbow circle" is especially noteworthy.