Pelosi did take part in a Congressional delegation to China in November -- but in 2015, not 2019. 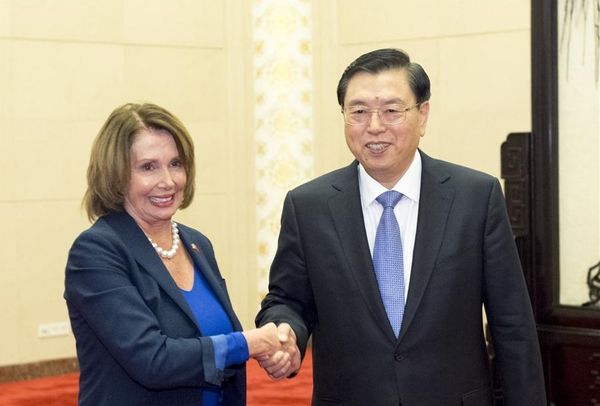 In April 2020, as the COVID-19 coronavirus disease pandemic continued to take its grim toll in countries around the world, a meme circulated on social media held that U.S. Speaker of the House Nancy Pelosi had undertaken a trip to Wuhan, China -- the apparent origin place of the coronavirus outbreak -- just a month before the initial cluster of COVID-19 cases was reported to the World Health Organization: The meme suggested (that is to say, overtly stated) that Pelosi was engaged in "traitorous" activity in China related to "this virus release."

However, Pelosi's House website and social media accounts neither display, nor have been scrubbed of, any mention or documentation of her having traveled to Wuhan (or anywhere else in China) during that timeframe. The Foreign Travel Reports lodged with the House Clerk don't record Pelosi's making a trip to China during the fourth quarter of 2019. (She accompanied a Congressional delegation to Jordan, Afghanistan, and Qatar in mid-October 2019). And no contemporaneous news accounts in either the U.S. or China reported Pelosi's having been in latter country in November 2019.

As well, the accompanying photograph used in the meme does not show Pelosi visiting Wuhan or meeting with Chinese officials at any time in 2019. It dates from November 2015, four full years before the COVID-19 outbreak, and pictures Pelosi (who was then the House Minority Leader) meeting with now-retired Chinese politician Zhang Dejiang as the head of a Congressional delegation to Beijing. Xinhua, China's state-run press agency, described that meeting as follows:

China's top lawmaker Zhang Dejiang met with Nancy Pelosi, head of the Democratic Minority in the US House of Representatives, calling for more exchanges and communication between l Supreme Legislative Body of China and the United States Congress.

"Sino-US relations are" very important," said Zhang, chairman of the Standing Committee of the National People's Congress (AFN, Chinese parliament), said that China and the United States had agreed to build a new type of relations between major countries during President Xi Jinping's state visit to the United States in September.

The presidents of the two countries clearly indicated the correct direction of the development of bilateral relations and reached a series of agreements during this visit, sending a positive signal to the rest of the world that China and the United States were attached to the dialogue and cooperation, according to Zhang.

He called on the AFN and the United States Congress to strengthen communication and exchange, deepen mutual understanding and promote substantial cooperation in the spirit of mutual respect and the search for common ground.

Zhang urged the two sides to redouble their efforts to promote mutual trust and cooperation, with the aim of promoting the development of bilateral relations and benefiting the people of both countries and the world.

Praising the meeting between the two presidents, Pelosi said she expected the legislative bodies of the two countries to strengthen exchanges to promote friendship between their peoples.

Earlier, Zhang Ping, deputy chairman of the AFN Standing Committee, organized a meeting between the AFN and the US Congress delegation led by Ms. Pelosi.

The two sides had a frank and deep exchange of views on issues such as bilateral relations, legislative exchanges and climate change.