Does Pelosi Want 'Guaranteed Minimum Incomes' for 'Illegal Aliens' in Next COVID-19 Stimulus?

A right-wing provocateur made the claim in a May 2020 tweet as federal leaders negotiated what to include in their next COVID-19 economic relief package. 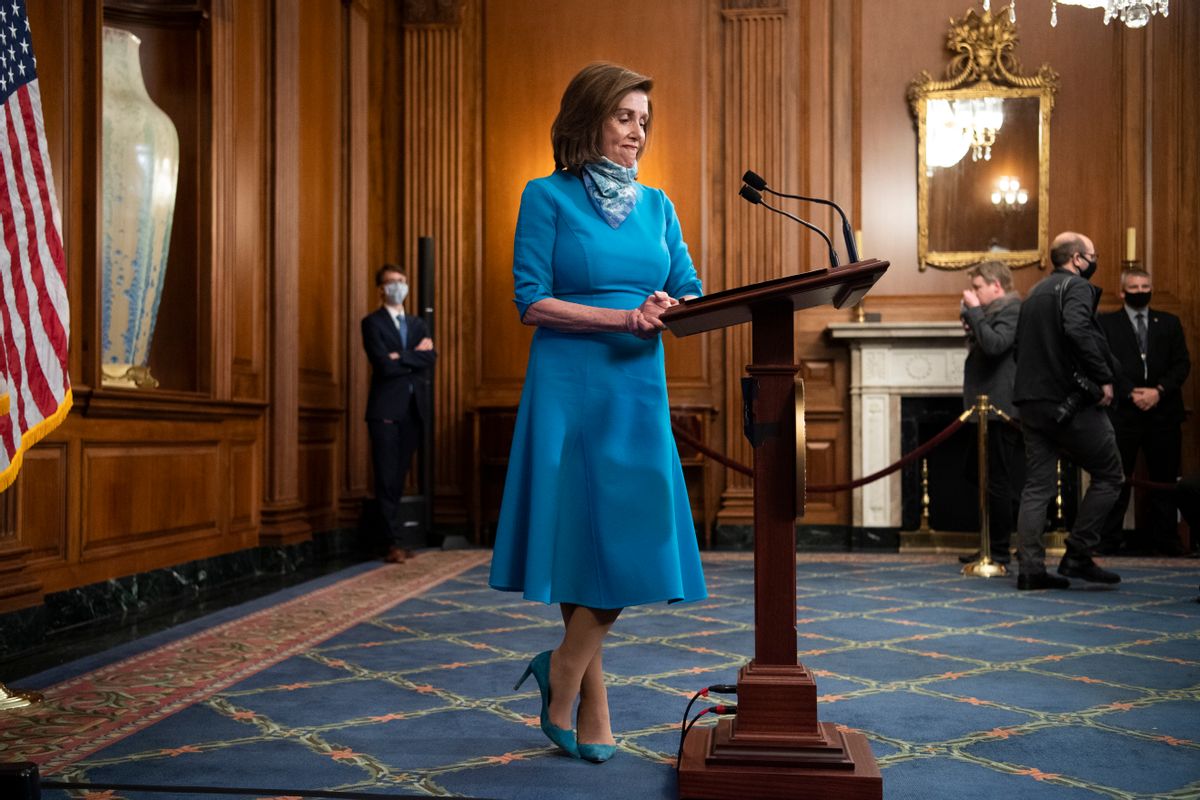 In spring 2020, Pelosi said she wanted federal leaders to consider "guaranteed incomes" to help Americans survive the COVID-19 economic crisis. One of the references was during a call with journalists to discuss ways for the federal government to boost aid for foreign-born people without Social Security numbers, which includes immigrants who don't have legal status.

Pelosi did not say she wants the federal government to definitely implement "guaranteed minimum incomes" but rather that it should consider the option. Additionally, an aid to the House Speaker said Pelosi used the phrase "guaranteed incomes" to mean that workers should be guaranteed paychecks — not that the country should implement universal basic income.

On May 4, 2020 — as federal leaders debated how to respond to an unprecedented interruption to the U.S. economy due to the COVID-19 coronavirus pandemic — a conservative provocateur tweeted that U.S. House Speaker Nancy Pelosi said she wanted the country's next economic relief package to establish "guaranteed minimum incomes" for "illegal aliens."

Suggesting that only legal U.S. residents should benefit from federal stimulus packages, Charlie Kirk — who's the founder of the conservative political group Turning Point USA and social media ally of U.S. President Donald Trump — said in the tweet to his roughly 1.7 million followers: To investigate the validity of his claim, we examined Pelosi's public statements and media appearances to determine if, or when, she used the phrased "guaranteed income" — and under what circumstances.

While Kirk provides no explanation for where or when or to whom Pelosi made the remarks in the above-displayed tweet — aside from the tweet's indication with the word "BREAKING" that the House Speaker had made the comments shortly before he composed the post — we considered statements by Pelosi since the beginning of the COVID-19 U.S. outbreak in early 2020 for our investigation. Within that timeframe, she used or referenced the phrase "guaranteed income" in three public statements, two of which were televised interviews.

First, the House Speaker spoke the words on HBO's "Real Time with Bill Maher" on April 24. In light of the federal government's approval of the $2.2 trillion Coronavirus Aid, Relief, and Economic Security (CARES) Act in March 2020 (and stimulus bills totaling about $500 billion since then), Maher asked Pelosi if the federal government could afford similar economic relief packages for Americans should the pandemic keep businesses closed and systems locked down in the coming months. She responded:

I think that it should be clear that this (COVID-19 stimulus spending so far) is not doing the job that it is set out to do completely, that we may have to consider some other options.  Others have proposed a sovereign fund – profits of which go to these unemployed people – or guaranteed income, other things that may not even be as costly as continuing down this path.

She provided no further details on the so-called proposals for "guaranteed income," which generally refers to a government-imposed system so that every citizen receives a minimum income — a central idea of the 2020 presidential campaign by former Democratic candidate Andrew Yang. Also in the conversation with Maher, Pelosi did not explicitly state that she wanted the system implemented via Congressional legislation.

Three days later, however, the House Speaker again said the words "guaranteed income" in a televised interview, this time with more specificity on her openness to the social welfare system. In the April 27 segment of MSNBC's "Live with Stephanie Ruhle," while explaining federal leaders' next steps to help small businesses survive the financial crisis, Pelosi said:

As we go forward, let's see what works: what is operational and what needs other attention.

Others have suggested a minimum income for — a guaranteed income for — people. Is that worthy of attention now? Perhaps so, because there are many more people than just in small business and hired by small business, as important as that is to the vitality of our economy. And other people who are not in the public sector, you know, meeting our needs in so many ways, that may need some assistance as well.

Soon after she made the statement on live TV, news outlets including CBS News and CNBC published stories with headlines such as, "Pelosi says 'guaranteed income' for Americans is worth considering for coronavirus recovery." In a story by Business Insider about the televised comments, an aid to Pelosi said the House Speaker was referring to proposals that would guarantee worker paychecks — not a sweeping system for universal basic income.

Then, on May 1, the House Speaker and the Congressional Hispanic Caucus made themselves available to journalists via a conference call to discuss provisions within the CARES Act that exclude immigrants without Social Security numbers from receiving one-time stimulus checks.

In the call, Pelosi expressed support for legislation that would guarantee COVID-19 economic relief to not only people with Social Security numbers but also immigrants and their families who use Individual Taxpayer Identification Numbers (ITINs), which the IRS assigns to workers without Social Security numbers, to pay annual taxes.

According to the IRS, the federal agency issues the numbers "regardless of immigration status, because both resident and nonresident aliens may have a U.S. filing or reporting requirement under the Internal Revenue Code." In other words, some immigrants who use the identification numbers (ITINs) — not social security numbers — to pay taxes may be "undocumented."

According to a transcript of the May 1 call, at one point a reporter asked Pelosi:

Pretty recently you said that Congress should consider adding some form of guaranteed monthly income into the next coronavirus relief package. So I was wondering if you would extend that form of guaranteed income to undocumented immigrants and non-citizens who file taxes with tax ID numbers, ITINs, instead of Social Security numbers?

In her response, Pelosi reiterated that she thinks federal leaders should consider guaranteed income and that she would talk to chairs of House committees about exploring the idea further. Additionally, as they consider future economic benefits for Americans during the pandemic, she said:

Any way we go down the path that [ITINs] should apply, whether it’s direct payments, whether it’s participation in PPP (the federal Paycheck Protection Plan loan program)...

But, whatever we do, I think the tax number is an easy entrée to many more people who deserve it, who should get this, but are being cut out now, in whatever it is that we are putting out there.

Given the nature of and circumstances surrounding the May 1 call, and considering the fact that Pelosi did not mention "guaranteed income" in any other public statements after the U.S. COVID-19 outbreak and before Kirk's viral posting, we determined it to be the most likely source of inspiration for his May 4 tweet.

However, though Pelosi said she wants people who use ITINs to receive economic relief from the federal government during the pandemic — a group that would include "undocumented" immigrants — she did not say she wants the government to provide stimulus payments to all "undocumented" immigrants. Additionally, the House Speaker said she wanted federal leaders to consider, not implement, "guaranteed income" for Americans, unlike what Kirk's tweet implies.

In sum, given those reasons — as well as the lack of clarity for what Pelosi means by the phrase "guaranteed income," the context in which she made the comments analyzed above, and the fact that she did say she wanted future stimulus money to help foreign people without Social Security numbers — we rate this claim as "Mostly False."