Did Pelosi Stage Photo of Herself Getting COVID-19 Vaccine?

Members of Congress were among the first people in the U.S. to receive the vaccine in 2020. 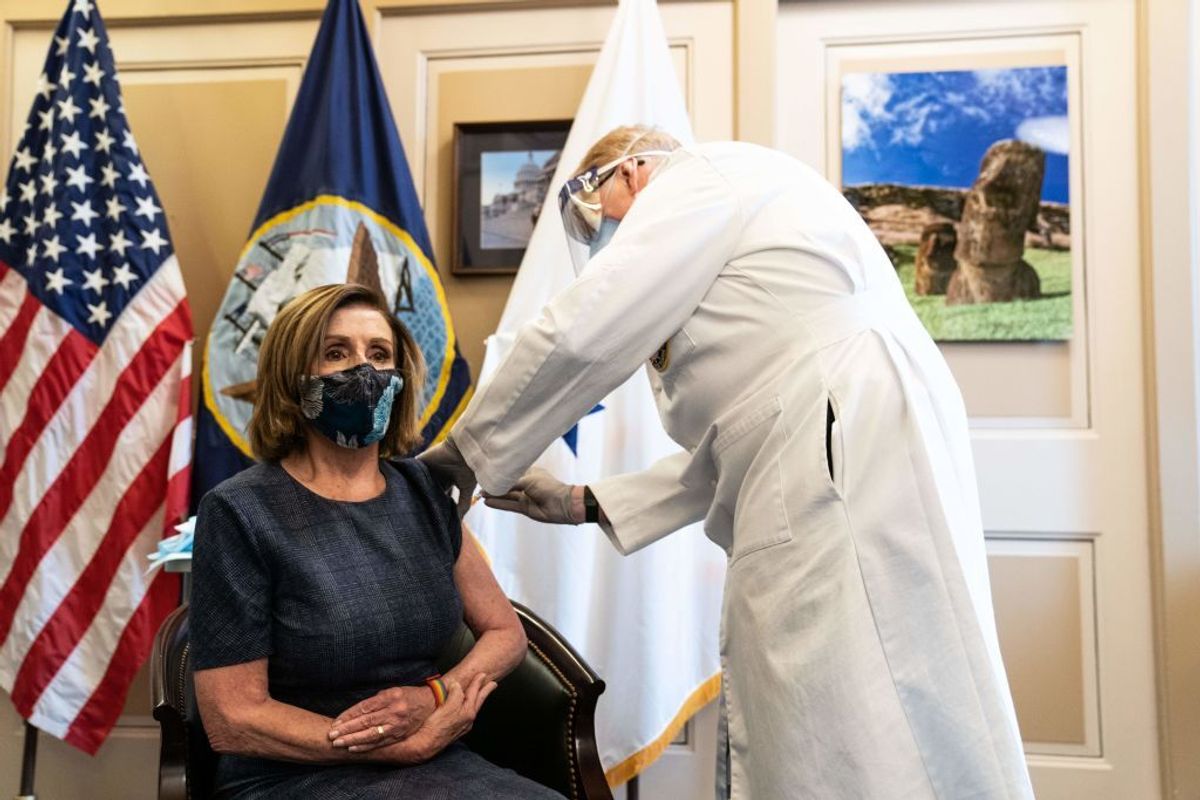 Claim:
Photographs that circulated in mid-December 2020 showed U.S. House Speaker Nancy Pelosi, a Democrat from California, receiving her COVID-19 vaccination with a needle that was still sealed with its orange cap.
Rating:

In the days following the U.S. Food and Drug Administration’s emergency use authorization (EUA) for two COVID-19 vaccinations, members of Congress were among the first people in the United States to receive the first of their two-dose immunization. Among those who shared their experience were Vice President Mike Pence, Senate Majority Leader Mitch McConnell, and House Speaker Nancy Pelosi — all of whom posted photos to social media.

But a photograph that supposedly showed Pelosi receiving her vaccination with an orange cap over the needle had some users questioning whether she had staged the event.

“How do you use a syringe with the cap still on?” read a three-photo Facebook post shared on Dec. 18, 2020. At the time of this writing, the post had been shared more than 1,400 times. Other social media users shared similar photos, questioning whether Pelosi had received a vaccination that had already caused a flurry of controversy, confusion and conspiracy on the internet.

Both the Pfizer BioNTech and Moderna COVID-19 vaccinations were granted EUA approval in mid-December. Nearly all of the doses were expected to be administered to healthcare workers and residents of long-term care homes, according to recommendations issued by the Advisory Committee on Immunization Practices to the Director of the Centers for Disease Control (CDC) and Prevention. Some personnel working for Congress, the Supreme Court, and the Executive Branch agencies were deemed essential workers eligible for the vaccination under the Presidential Policy Directive 40 (PPD-40), a federal government initiative that ensures agencies are able to continue the performance of essential functions.

A news release shared by Pelosi on Dec. 17 announced the politician’s decision to get the COVID-19 vaccination under “unequivocal” guidance offered by the Office of the Attending Physician, who noted that congressional leadership was eligible to receive the vaccine.

“Today, with confidence in science and at the direction of the Office of the Attending Physician, I received the COVID-19 vaccine,” wrote Pelosi in a Twitter post shared the following day. “As the vaccine is being distributed, we must all continue mask-wearing, social distancing, and other science-based steps to save lives and crush the virus.”

In her Tweet, Pelosi shared two images of her receiving the vaccination. But it was these very photos that social media users pointed out showed an orange cap on the needle, suggesting that Pelosi had staged the event and did not actually receive the immunization. Though the exact makeup of the syringe used is unknown, hypodermic needles like the one used to administer the COVID-19 vaccine are generally made in multiple parts, two of which are known as the needle adapter and needle hub. As evidenced in the diagram below, the protective cover that goes over the needle is much longer than the adapter used to connect the needle to the syringe. And lastly, a photograph showed Pelosi holding up her vaccination record card after receiving the first dose of the COVID-19 vaccination. Similar claims had been made about other politicians who received their COVID-19 immunization, including Vice President Mike Pence, who was administered the Pfizer vaccine with his wife Karen and Surgeon General Jerome Adams on live television. The 25-minute segment showed a medical team from Walter Reed Hospital delivering the first of two vaccine doses at the Eisenhower Executive Office Building in the District of Columbia on Dec. 18. Between the 1:40 and 3:00-minute marks, the video shows Mike and Karen Pence, as well as Adams, receiving their shots.

Update [Dec. 23, 2020]: This article was updated to include similar claims of staging vaccinations made against Vice President Mike Pence and other elected officials.