Did Nancy Pelosi Scold a Democrat for Standing at the State of the Union Address?

Images showing Nancy Pelosi pointing a finger at a Linda Sanchez are authentic, but a video of the event told a different story. 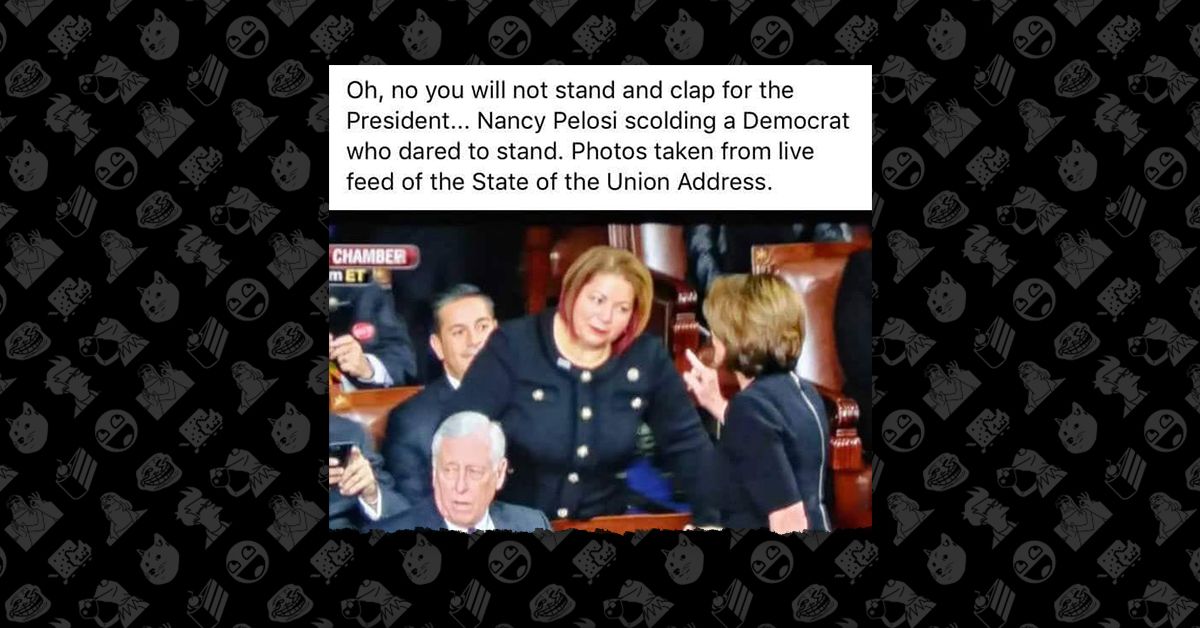 Republican lawmakers appeared eager to show their support for President Trump during his first State of the Union address as they repeatedly met his remarks with bouts of applause and standing ovations. Democrats, on the other hand, were subdued. Their lack of enthusiasm inspired a 4chan user to post a meme purportedly showing House Minority Leader Nancy Pelosi scolding a fellow Democrat who "dared to stand" in support of President Trump: Oh, no you will not stand and clap for the president.... Nancy Pelosi scolding a Democrat who dared to stand. Photos taken from live feed of the state of the Union Address.

While the images are authentic, they don't show Pelosi scolding anyone. The moment can be glimpsed at the 8:40 mark of the following video. It shows Pelosi talking with Rep. Linda Sanchez (D-Calif.) just after President Trump had arrived and before he had started speaking:

As can be seen in the video, the two women are speaking amicably, with Sanchez nodding comfortably at Pelosi. No one in the immediate vicinity was clapping at the time. The caption for the meme was purely speculative, was not based on firsthand information, and was simply an attempt to discredit Pelosi.

A spokesperson for Congresswoman Sanchez responded to the claims:

Nothing could be further from the truth. They were just casually chatting as Rep. Sánchez made her way to her seat.

Also, the images themselves are misleading. For instance, the second image in this graphic appears to show Sanchez rolling her eyes at Pelosi. However, video of the incident tells a different story: Sanchez merely glanced to her side as she was making her way to her seat.

We' also reached out to Pelosi for comment but did not hear back by press time.