President Reagan may have termed the Soviet Union "evil," but Nancy Pelosi? 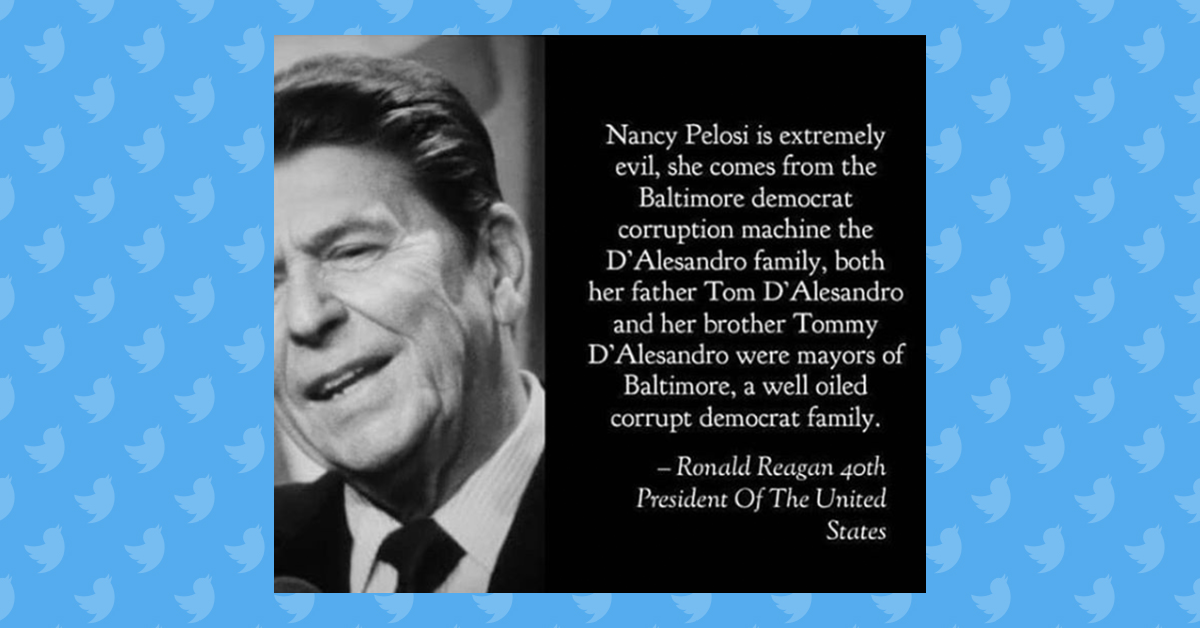 Claim:
President Ronald Reagan once said, “Nancy Pelosi is extremely evil” because she is a member of the politically connected D'Alesandro family.
Rating:

As any victim of 2017’s Fyre Festival would surely tell you, just because someone posted something on Instagram does not mean that post was in any way a representation of reality. Case in point: a post from an Instagram user published on 20 January 2019 alleging that President Ronald Reagan, at some indeterminate point in time, had described Nancy Pelosi as “extremely evil”: Displaying a flawed understanding of both the constitutional power granted to United States presidents as well as standard punctuation, the poster suggested “it’s time Trump exercises his right of reduction in force and get rid of this b****”, referring to Pelosi. The post, which included hashtags such as “#endtimes”, “#islam” and “#libtards”, was the earliest reference we've found to this alleged Reagan quote. The meme has since been shared by numerous other accounts that promote the QAnon conspiracy theory.

We found no record of Reagan's ever making such a statement in any public forum. We reached out to the Ronald Reagan Presidential Library to ask if there was any possibility the 40th president ever uttered anything close to these words, and Michael Pinckney, an archivist with the library, told us in response that "I couldn't find any source for this quote. I researched President Reagan public speeches and Nancy Pelosi doesn't even show up. [I] also researched our open papers and again, her name doesn't come up."

“On a personal level,” Pinckney told us via email, “this doesn't sound like something President Reagan would say.” Joanne Drake, the Chief Administrative Officer for the Reagan Foundation, concurred. Via email, she told us "President Ronald Reagan never spoke those words at any time – and never would." Although Nancy Pelosi’s time in national politics began in 1987, at the tail end of Reagan’s presidency and political career, the Pelosi family and the Reagan family (both from California) have enjoyed cordial relations. At the unveiling of a Ronald Reagan statue in June 2009, for example, Nancy Reagan and Nancy Pelosi shared these words:

Pelosi ... noted [President Reagan’s] civility, a quality that has since all but vanished in Washington. "Ever a gentleman, he never questioned the motives of the person because he knew people in public office loved our country and acted on behalf of the American people," Pelosi said.

Former first lady Nancy Reagan, 87, whose last visit to the Rotunda was when her husband lay in state there five years ago, singled out the speaker among the many dignitaries gathered. "I'm very grateful to her," she said. "Everybody else, too, but particularly Nancy."

Her voice breaking, Nancy Reagan added, "It's nice to be back under happier circumstances," With that, the two women, both dressed in white, warmly embraced and turned to unveil the enormous bronze likeness.

It is true that Nancy Pelosi hails from a powerful family of Baltimore Democrats. Her father, Thomas D'Alesandro Jr., “served 22 consecutive terms in public office, from state delegate to city councilman to U.S. congressman to Baltimore mayor, followed by a low-level appointment from President John F. Kennedy to something called the Federal Renegotiation Board.” Pelosi’s brother, Thomas D'Alesandro III, has also served as mayor of Baltimore.

Because this quote only emerged 14 years after Reagan’s death as an unattributed, unsourced Instagram meme for “#libtards,” because we found no evidence to support the notion that Reagan ever said anything close to these words, and because the sentiment expressed does not sound like something Ronald Reagan would say, we rate this claim as false.

Duke, Lynne.   "Pride of Baltimore Nancy Pelosi Learned Her Politics at the Elbow of Her Father the Mayor.”     The Washington Post.   10 November 2006.