Did Pelosi Wear Same Dress for Both of Trump's Impeachments?

U.S. President Donald Trump was the first president in American history to be impeached twice. 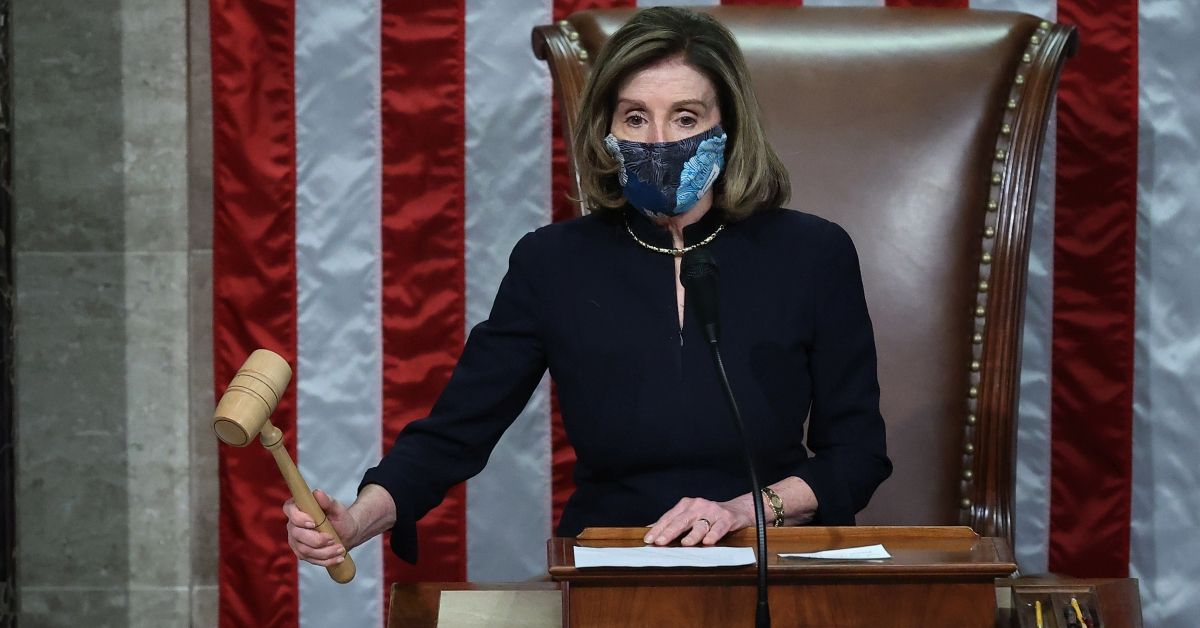 As that historic moment unfolded, social media users noticed that House Speaker Nancy Pelosi appeared to be wearing the same outfit during Trump's second impeachment that she wore during his first: These are both genuine photographs of Pelosi.

The image on the left was was taken on Jan. 13, 2021, by Al Drago as Pelosi presided over the most bipartisan impeachment vote in U.S. history. The photograph is available via Getty Images with the following caption:

U.S. House Speaker Nancy Pelosi, a Democrat from California, wears a protective mask while banging the Speaker's gavel on the floor of the House at the U.S. Capitol in Washington, D.C., U.S., on Wednesday, Jan. 13, 2021. President Donald Trump was impeached by the U.S. House on a single charge of incitement of insurrection for his role in a deadly riot by his supporters that left five dead and the Capitol ransacked, putting an indelible stain on his legacy with only a week left in his term. Photographer: Al Drago/Bloomberg via Getty Images

The image on the right was taken on Dec. 18, 2019, and shows Pelosi presiding over Trump's first impeachment. That photograph, taken by Patrick Semansky, is available via Getty Images with the caption:

U.S. House Speaker Nancy Pelosi, a Democrat from California, strikes the gavel after announcing the passing of the second article of impeachment against President Donald Trump in the House Chamber in Washington, D.C., U.S., on Wednesday, Dec. 18, 2019. The U.S. House of Representatives impeached Trump on charges of abuse of power and obstructing Congress, the culmination of an effort by Democrats that further inflamed partisan tensions in Washington and deepened the nations ideological divide. Photographer: Patrick Semansky/AP Photo/Bloomberg via Getty Images

While Pelosi has not commented specifically on her impeachment outfits, she said in 2019 that the impeachment of a president is a "sad time for our country," a sentiment that makes her all black ensemble fitting.

It should be noted that there are two small differences to Pelosi's sartorial choices in 2019 and 2021. During Trump's first impeachment trial, Pelosi wore a gold brooch of the Mace of the Republic, a symbol of the House of Representatives authority. Pelosi did not wear this brooch at the impeachment in 2021.

The other change, of course, is that Pelosi wore a face mask in 2021 due to the ongoing COVID-19 pandemic.

We reached out to her office, and we will update this article if more information becomes available.