Are Pedophiles Claiming to be 'Age Fluid'?

A scaremongering piece of propaganda was created to smear the LGBTQ community. 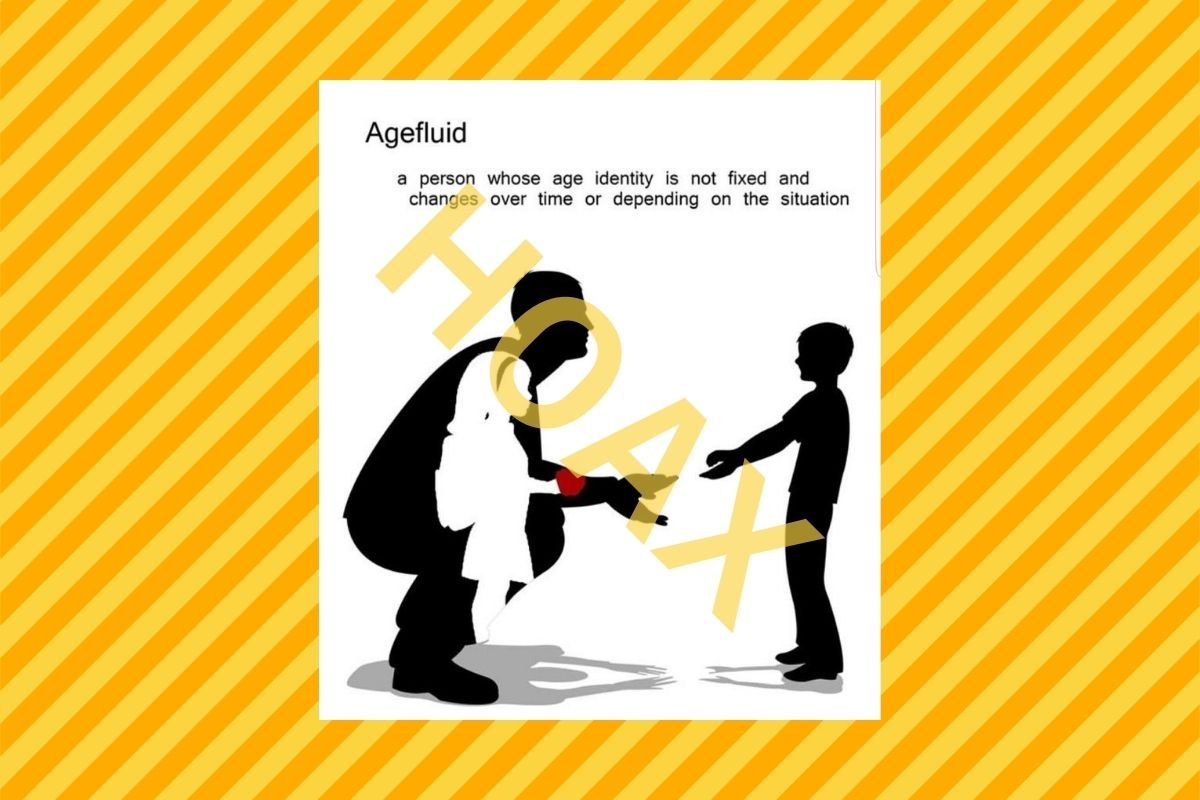 In July 2020, an old and debunked rumor claiming that pedophiles were attempting to normalize "age fluidity," an invented term for a fictional medical condition in which a person self-identifies as a younger age in order to engage in physical relationships with children, was recirculated on social media.

This rumor was often shared in the form of a text post. Here's an excerpt from one popular iteration: While we are arguing over the efficacy of masks, a vile group of people are trying to make pedophilia a sexual orientation and believe it is 100% ok to be age fluid.

This is inaccurate. No concerted effort exists to normalize "age fluidity" as a way for adults to engage in sexual relationships with children. This is transphobic hoax that was created in an attempt to smear the LGBTQ community by linking them to pedophilia.

This smear is not a novel one. In fact, there have been repeated attempts to spread the long-disproven idea that homosexuality is linked to pedophilia, despite the lack of scientific proof to support this claim.

In 2017, for example, a false rumor was circulated on social media claiming that the LGBTQ community was working to change their acronym to "LGBTQP," with the "P" standing for "pedosexual."  In 2018, a troll Tumblr page created and spread a pride flag for "MAPS," a  term meaning "Minor Attracted Persons," and falsely claimed that the group was earning currency with the LGBTQ community.

The above-displayed meme, which was created from a stock image of a "father talking with son silhouette" (the white outline of a little girl was not present in the original image), started circulating on social media circa early 2017. At the time, a troll campaign was underway by bad actors who were falsely claiming to be "clovergendered," an imaginary medical term that supposedly referred to a person whose mind stopped developing at a young age. These "clovergendered" people were now adults, but since their minds stopped developing at a young age, they claimed it was acceptable for them to be attracted to minors.

One 4chan thread from Dec. 31, 2016, informed social media users that they were creating a "new gender" to troll "social justice warriors" and defined "clovergender" as "a child trapped in a man’s body who is attracted to other children."

The Twitter account @clovergender, which has since been suspended, was one of the first to start sharing the "Age Fluid" meme shown above.

This meme was created as part of a troll campaign that aimed, in part, to spread the repeatedly debunked notion that a link exists between the LGBTQ community and pedophilia. Live Science addressed this persistent myth about homosexuals in a 2011 article, writing:

An especially pernicious myth is that most adults who sexually abuse children are gay. A number of researchers have looked at this question to determine if homosexuals are more likely to be pedophiles than heterosexuals, and the data indicate that's not the case.

In short, no concerted effort exists by any group to normalize "age fluidity" in order to legally engage in sexual relationships with children. This is a transphobic piece of anti-LGBTQ propaganda that originated in 2017.