A misleading article claimed that an association of pediatricians had "admitted" a link between the human papillomavirus vaccine Gardasil and ovarian "failure" or cancer. 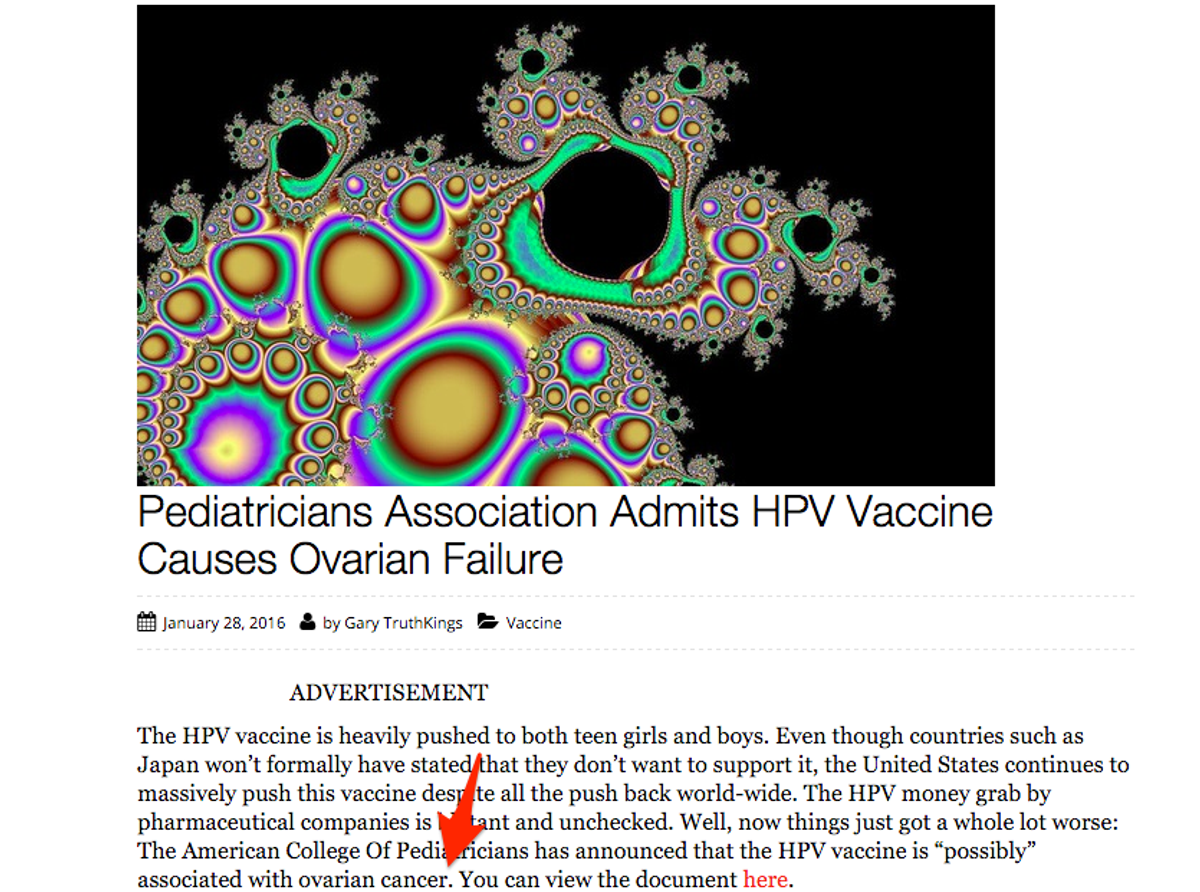 On 28 January 2016, the web site Truth Kings published an article under the headline "Pediatricians Association Admits HPV Vaccine Causes Ovarian Failure." As with many similar "shocking medical truth" items, the article's headline wasn't supported by the text of the article itself, which linked to entirely unrelated medical information as support for the headline's proclamation:

The HPV vaccine is heavily pushed to both teen girls and boys. Even though countries such as Japan won’t formally have stated that they don’t want to support it, the United States continues to massively push this vaccine despite all the push back world-wide. The HPV money grab by pharmaceutical companies is blatant and unchecked. Well, now things just got a whole lot worse: The American College Of Pediatricians has announced that the HPV vaccine is "possibly" associated with ovarian cancer. You can view the document here.

Clicking through on on the hyperlinked word "here" led to the web site of the American College of Pediatricians, not the American Academy of Pediatrics (AAP), which is the mainstream organization for that particular medical specialty. A 31 July 2005 Boston Globe article reported on the difference between the two groups:

The American Academy of Pediatrics, composed of leaders in the field, had found no meaningful difference between children raised by same-sex and heterosexual couples, based on a 2002 report written largely by a Boston pediatrician, Dr. Ellen C. Perrin.

[But President George W. Bush]'s statement [to the contrary] was welcomed at a small organization with an august-sounding name, the American College of Pediatricians. The college, which has a small membership, says on its website that it would be "dangerously irresponsible" to allow same-sex couples to adopt children. The college was formed just three years ago, after the 75-year-old American Academy of Pediatrics issued its paper.

The Family Research Institute and the American College of Pediatrics are part of a rapidly growing trend in which small think tanks, researchers, and publicists who are open about their personal beliefs are providing what they portray as medical information on some of the most controversial issues of the day.

The College's website said there is scientific evidence that gays and lesbians are more prone to mental illness, substance abuse, and other problems, concluding with a strong warning against same-sex parenting ... The College has been widely quoted in the media, sometimes without an explanation, as saying that it broke away from the Academy, largely over the issue of same-sex parenting.

In other words, the American College of Pediatricians is a very small, recently-formed group created in response to a political disagreement over same-sex parenting, whose focus is promoting parenting by married, heterosexual couples:

The Mission of the American College of Pediatricians is to enable all children to reach their optimal physical and emotional health and well-being. To this end, we recognize the basic father-mother family unit, within the context of marriage, to be the optimal setting for childhood development, but pledge our support to all children, regardless of their circumstances. The American College of Pediatricians promotes a society where all children, from the moment of their conception, are valued unselfishly. We encourage mothers, fathers and families to advance the needs of their children above their own. We expect societal forces to support the two-parent, father-mother family unit and provide for children role models of ethical character and responsible behavior.

By contrast, the American Academy of Pediatrics' mission statement is more concise about their focus of addressing the health needs of children:

The mission of the American Academy of Pediatrics is to attain optimal physical, mental, and social health and well-being for all infants, children, adolescents and young adults. To accomplish this, AAP shall support the professional needs of its members.

With respect to the Gardasil vaccine, the prevailing science-based medical viewpoint of it issued by the AAP is as follows:

HPV vaccine is recommended for children aged 11-12 years so ​that they are protected before exposure to the virus. There are three types of HPV vaccine (Cervarix,  Gardasil, and Gardasil-9) that are given as a 3-dose series. Girls should receive 3 doses of any of these vaccines to prevent HPV-related diseases. Boys should receive 3 doses of HPV4 (Gardasil) or HPV9 (Gardasil-9). Teens 13 years and older who either did not get any or did not receive all of the HPV vaccines when they were younger should complete the vaccine series.  Adolescents and young adults need all three shots for full protection.

The AAP's official policy statement on Gardasil can be read in full here.

Organizational scope and purpose aside, the article in question published by the American College of Pediatricians was titled "New Concerns about the Human Papillomavirus Vaccine." However, that article didn't "admit" that the vaccine caused cervical cancer (a finding that would be considered newsworthy and widely reported); in fact, the article stated in its opening paragraph that:

Adverse events that occur after vaccines are frequently not caused by the vaccine and there has not been a noticeable rise in POF (premature ovarian failure) cases in the last 9 years since HPV4 vaccine has been widely used.

Portions of the article that were critical or cautious about Gardasil pertained not to cancer, but to ovarian "dysfunction." That term is broad and is most frequently associated with conditions such as Polycystic Ovary Syndrome, or PCOS. And even that caution was expressed as a call for more data, rather than as documentation of specific cause-and-effect relationship between Gardasil and "ovarian dysfunction":

Numerous Gardasil safety studies, including one released recently, have looked at demyelinating and autoimmune diseases and have not found any significant problems. Unfortunately, none of them except clinical safety pre-licensure studies totaling 11,778 vaccinees specifically addressed post-vaccination ovarian dysfunction.

Prior to their January 2016 statement, the American College of Pediatricians had released a single policy statement on Gardasil. While the AAP focused on the benefits and safety aspects of the vaccine, the ACP's statement espoused a more morality-focused viewpoint. Nonetheless, the ACP's policy statement still favored Gardasil vaccination over abstention:

The debate as to whether vaccinating adolescents against a sexually transmitted infection such as HPV may contribute to an increase in premarital sex is not settled.

Given the effectiveness of these vaccines against HPV infection and its morbidities, the American College of Pediatricians favors offering HPV vaccination to all children and young adults even if they are committed to abstinence until marriage. Although abstinence outside of marriage is very effective in preventing all types of STIs, there are potential risk circumstances beyond an individual's control, including sexual assault and the infection of one's future spouse. Parents should closely monitor their children’s activities while reinforcing both morally and medically sound values. If parents do not model sexual fidelity or fail to restrict their children's exposure to sexually explicit media, including pornography, then they can expect their children to be at high risk for STI acquisition, and those children should not wait to be vaccinated against HPV. Also, parents should consider that many adolescents will be involved in high-risk activities without their knowledge, and waiting until this is realized may place the child at  risk for acquiring HPV.  However, the College maintains that use of HPV vaccines should not be mandated by regulatory authorities, but remain a personal decision by parents and their children.

In short, Truth Kings' alarmist revelation about Gardasil came not from the long-esablished American Academy of Pediatrics, but from a politically-focused breakaway organization devoted to supporting specific moral stances. Even then, that latter organization didn't take an initial stand against Gardasil, and their January 2016 policy statement merely called for further study about a potential connection between Gardasil and ovarian dysfunction. The word "cancer" did not appear a single time in that release, nor was the organization "admitting" anything by any stretch of the imagination. Moreover, Truth Kings' appended image was simply a stock photograph unrelated to Gardasil.

Finally, the American College of Pediatricians acknowledged "there is no strong evidence of a causal relationship between HPV4 and ovarian dysfunction" and stopped well short of rescinding their previous advice on HPV vaccination in their concluding remarks:

The College is posting this statement so that individuals considering the use of human papillomavirus vaccines could be made aware of these concerns pending further action by the regulatory agencies and manufacturers. While there is no strong evidence of a causal relationship between HPV4 and ovarian dysfunction, this information should be public knowledge for physicians and patients considering these vaccines.