Did Trump's Spiritual Adviser Ask People to Send Her Their January Salaries?

Paula White, a member of Trump’s evangelical advisory committee, is a televangelist who preaches the “prosperity gospel,” which offtimes involves sending money to White. 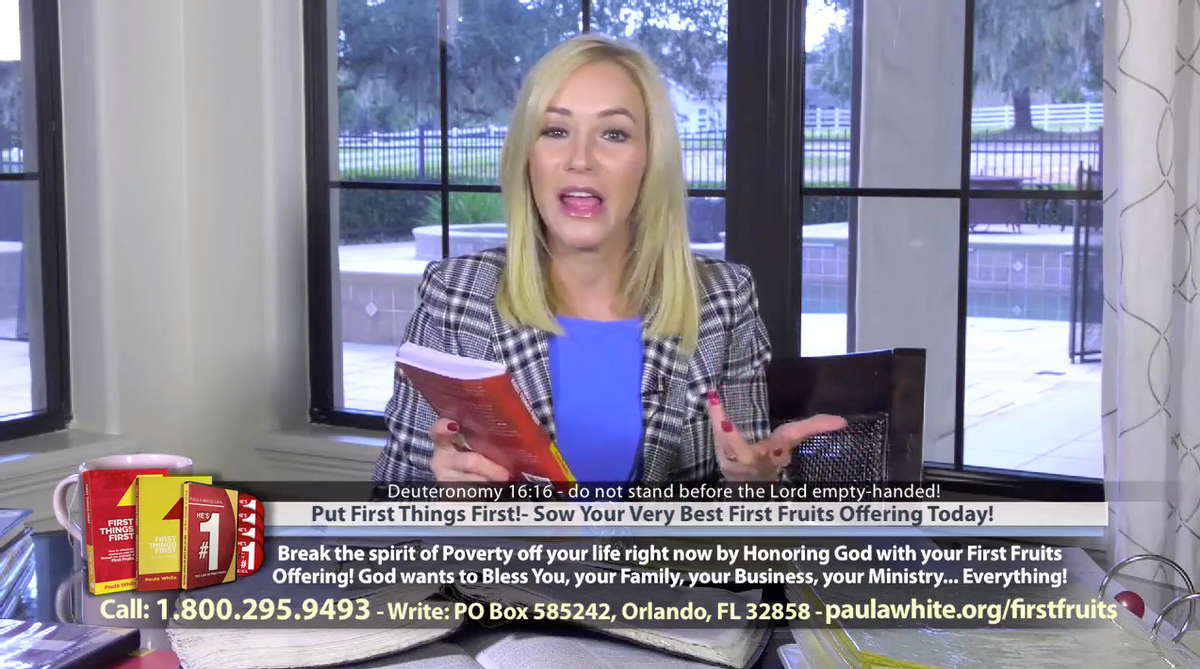 Claim:
Paula White, a member of President Trump’s evangelical advisory committee, asked her followers to donate their January salaries to her ministry.
Rating:

Paula White is a televangelist pastor who preaches the “prosperity gospel”, described by the Washington Post as “the theology that God will bless true believers not just with eternal salvation but with material wealth here on Earth.” She has allegedly been close to Donald Trump since well before his 2016 bid for the presidency, and she helped him orchestrate his meeting with hundreds of evangelical leaders during his presidential campaign. She was one of six religious leaders to pray at his January 2017 inauguration.

White is a controversial figure whose sermons compel her followers to give "seed offerings" to White's ministry. Her followers' generosity (in giving money directly to White's ministry), she teaches, will result in God's blessing and their future prosperity. Her ministry has been investigated by the U.S. Senate, and though they found no wrongdoing, the investigation demonstrated the significant personal wealth White has enjoyed as a result of running her ministry.

A large part of White's website involves the notion of giving “first fruits.” Citing Deuteronomy 16:16 (“do not stand before the Lord empty-handed”), White implored her followers in January 2019 to donate their first fruit offering directly to her ministry, and she provided a P.O. box number to which they could send checks. One of her suggestions was that followers should send her “a portion of their first month’s salary.”

“Paula is challenging you to put first things first,” her video explained, “and [to] honor God with a significant first fruits offering today. Many give one day's wages, other’s one week, still others a portion of their first month.” In return, White said to expect “that 2019 will be the year of recovery and supernatural advancement for you”:

From the pulpit of her church, White has urged her followers to donate as much as a full month's salary as a First Fruits offering, as reported in the Orlando Sentinel:

"Every year many others join us and sow a month's pay, a week's pay, others give a day's pay, but everyone gives their best — the results are miraculous! First Fruits has impacted my life personally and the lives of countless others! But First Fruits is more than just an offering, it's a principle," she says, that is ordained by God.

White has described her position as that of a "faith adviser," as well as the “head of a council with an inner core of about three dozen evangelical leaders who communicate by conference call and occasional visits to Washington.” In addition to this background, she has also suggested that her followers send her (or her ministry) a portion of their January salaries this year.

Zauzmer, Julie.   “Paula White, Prosperity Preacher Once Investigated by Senate, Is a Controversial Pick for Inauguration.”     The Washington Post.   29 December 2016.