Is Paul Ryan 'Out' as Speaker of the House?

Ryan has no plans to voluntarily leave his influential post, and it's unclear if any serious effort to replace him is afoot. 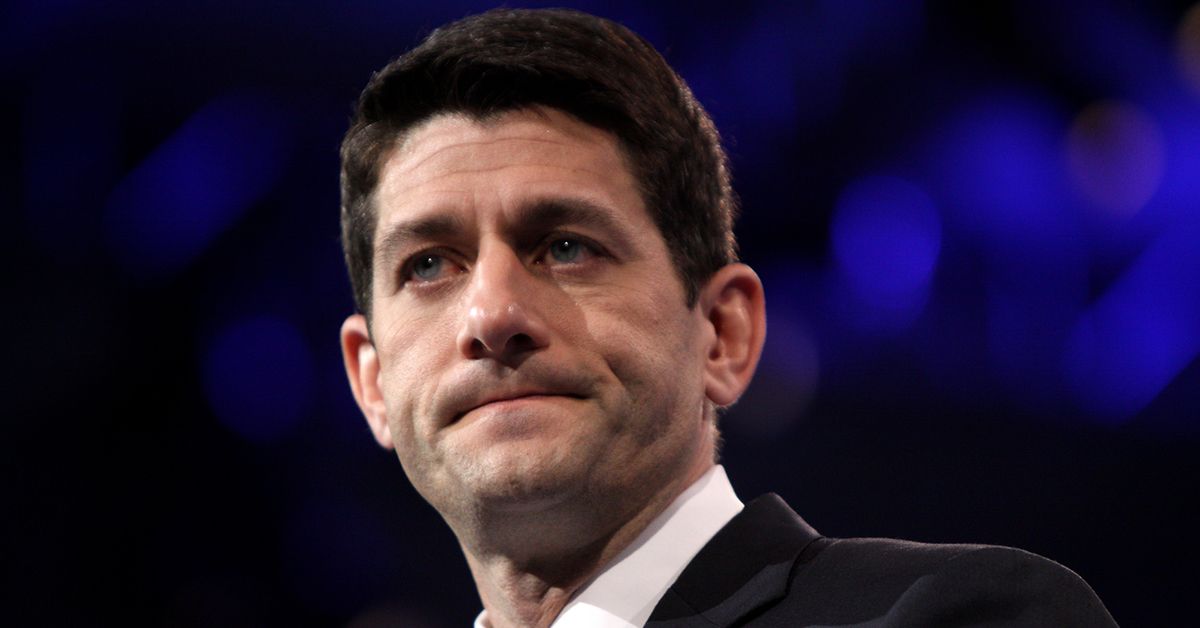 Claim:
Wisconsin Republican Paul Ryan is going to be replaced as Speaker of the House.
Rating:

On 19 April 2017, click bait web sites began to report that Wisconsin Rep. Paul Ryan (R-Wisconsin) is either no longer Speaker of the House, or about to be removed from his position.

One such sensational headline reads, "Paul Ryan No Longer Speaker? What He Just Found Out Has Him SPRINTING Out The Capitol Door!" The body of the story, however, does not say Ryan was removed from his influential position, but instead says his low national approval rating may be impetus for fellow Republicans to do so. The story also promotes the opinion that he should be ousted because he doesn't promote President Donald Trump's agenda well enough:

Over the past few months, we have been really disgusted with Paul Ryan and his treatment, or should I say, disdain for President Trump.

As Speaker of the House, Paul Ryan was unable to work with his own House Republican members, and refused to work with the president on repealing Obamacare. This should have been the easiest bill to pass in the House, as Americans are chomping at the bit for better healthcare. Instead, he gave us bad bill that didn’t make it to the floor for a vote. Now, we’re seeing the same issues when it comes to tax reform.

Let’s just say that America is fed up with the likes of Paul Ryan, and now there is a poll that should force him to think about resigning as Speaker of the House!

Ryan's spokeswoman AshLee Strong told us in an e-mail that he is not considering relinquishing his post as Speaker of the House.

Ryan's national approval rating is sagging —  a Pew Research poll showed him at 29 percent approval in early April 2017 — but he is not the only one struggling. Strong sent data that shows Ryan is not worse off than peers in both political parties:

Bottom line, Ryan’s favorability exceeds or is on par with Congressional leaders in national polling. Back home in Wisconsin, Ryan remains viewed positively. According to a recent Marquette University Survey: Speaker Paul Ryan holds a 45% favorable to 38% unfavorable rating, with 17% unable to rate him.

President Trump's approval rating in the Pew Research poll was 39 percent — higher than Ryan's, but still far lower than his predecessors Barack Obama, George W. Bush, Bill Clinton, George H.W. Bush and Ronald Reagan during the same time period of their respective presidencies. Meanwhile, the public's overall view of both parties has worsened recently, according to Pew:

Public assessments of the Republican and Democratic parties have worsened over the last few months. While the GOP’s image continues to be somewhat more negative than the Democratic Party’s, both parties are currently viewed more unfavorably than favorably. This is similar to their standing among the public this time last year.

A joint Wall Street Journal/NBC News poll found that Americans' displeasure with Ryan and Congress overall has been dropping since the February 2017, after a brief positive uptick:

Nearly three-quarters of Americans disapprove of Congress’s job performance, up 12 percentage points since February, the poll found. Just one-fifth said they approve of the job Congress is doing, a drop of 9 points.

The findings mark a return to recent norms in views of Congress, after a slight uptick in approval of lawmakers in February. With 20% approving of Congress, its rating is still slightly higher than in most months since May 2011.

Mr. Ryan (R., Wis.) is one focus of growing dissatisfaction, with 40% saying they view the House speaker negatively, compared with 22% who had a positive view—an 18-point gap. In February, unfavorable opinions outweighed positive ones by just 1 point.

Although there was at least one plot among some Republicans to remove Ryan from his post, as Politico reported on 16 November 2016, it was shelved when President Trump's won the November 2016 election:

Days before the presidential election, Freedom Caucus Chairman Jim Jordan called a small group of his closest House colleagues to deliver the news: The ringleader of the conservative agitators would soon mount a challenge to House Speaker Paul Ryan.

Jordan (R-Ohio) had been mulling a long-shot bid for weeks, and during a meeting in Washington the week before the election, some members of the group urged him to go for it. Jordan set up a whip operation to start courting support the day after the election, and his cohorts kept the plan a secret — even from some of their own members.

Then Donald Trump won. And the Freedom Caucus plot, like every other assumption about post-election Washington, was blown to pieces.

On 24 March 2017, the pro-Trump web sites reported there were discussions among Republicans in Washington about replacing the Speaker. The article was published the same day Congress failed to pass a bill repealing and replacing he Affordable Care Act (often referred to as Obamacare).

Other than the conjecture of web sites and Twitter users, there's no evidence suggestion Ryan will be replaced as House Speaker any time soon, but instead that he has been the off-again, on-again target of trolling and bloggers pushing for his removal from the influential post. It is unclear whether there will be enough support for ousting him before he comes up for reelection. Ryan himself, according to his spokeswoman, has no plans to voluntarily leave.

AmericanConservativeHerald.com. "Paul Ryan No Longer Speaker? What He Just Found Out Has Him SPRINTING Out the Capitol Door!"   19 April 2017.