A purported police mug shot of a bruised and disheveled Paul Pelosi miraculously turned up on social media after Pelosi's 2022 DUI arrest. 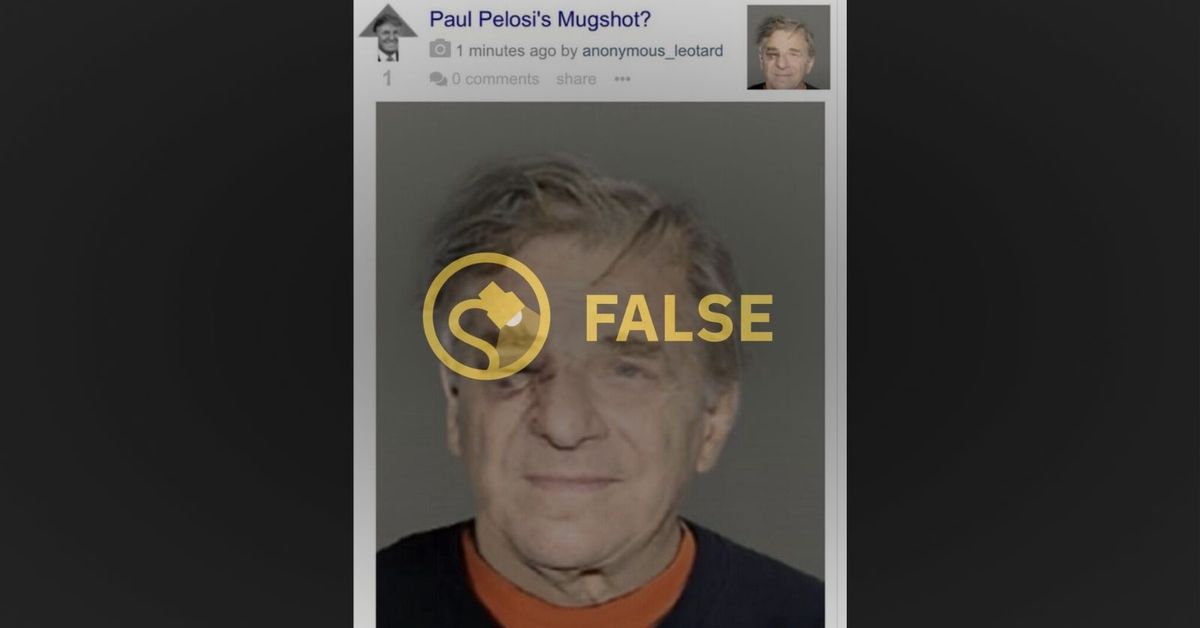 Claim:
A viral photograph purporting to show a bruised and disheveled Paul Pelosi is an authentic police mug shot.
Rating:

On May 28, 2022, businessman Paul Pelosi, the husband of U.S. Speaker of the House Nancy Pelosi, was arrested on suspicion of driving under the influence in Napa County, California, after he was involved in a traffic accident. Given his connection to one of the most powerful politicians in the United States, Pelosi's arrest prompted a great deal of discussion and rumormongering on social media.

One major topic of discussion was the whereabouts of Pelosi's arrest mug shot (which, in the immediat aftermath of the arrest, had still not been made public). One of the major rumors -- a hoax, actually -- was that the viral photograph below is that selfsame mug shot. As we will demonstrate shortly, it is not. The bruised and disheveled man in the supposed mug shot does resemble Paul Pelosi, and for good reason -- that man is Paul Pelosi, though this photograph of him was digitally modified to add bogus facial injuries and create the impression that it's a real police mug shot.

In point of fact, this, from Getty Images, is the original photograph that was used to forge Pelosi's "mug shot": Below are the two photographs, closer up and side-by-side. The first thing you'll notice is that in addition to the apparent injuries, Pelosi's face in the "mug shot" photo on the right is noticeably wider, indicating that it was stretched horizontally by whoever fabricated the mug shot. Also, the color is washed out: The creator of the fake mug shot (right) stretched the original image horizontally and desaturated the color.

In the pair of photographs below, we've narrowed the "mug shot" at left to an aspect ratio better approximating that of the original photograph (at right) to facilitate comparison: We've narrowed the aspect ratio of the "mug shot" (at left) to approximate the dimensions of the original.

The unaltered facial features are identical. Compare the eyebrows, the mouth, the ears, the nose, the chin, the neck. Compare the facial shadows, as well. And notice how the outline of the orange shirt in the "mug shot" (left) appears to have been crudely drawn in after the fact.

Below is our best attempt at combining the two images to demonstrate that the "mug shot" is fake -- a manipulated version of the original Getty photograph: Update: On June 13, 2022, the website of KRON, a San Francisco TV station, reported that Pelosi's actual mug shot taken the night of his arrest had finally been released to the public:

The real mug shot was released by the Napa County Department of Corrections along with the following statement:

(NAPA, California) — On the night of May 28, 2022, the California Highway Patrol (CHP) arrested Paul Pelosi (DOB 4/15/40) for Driving Under the Influence of Alcohol and Driving with a .08% Blood Alcohol Content or Higher. He was booked into the Napa County Department of Corrections and subsequently cite released the following morning.

In Napa County, the decision to release or withhold mugshots or booking photos lies with the Napa County Department of Corrections, not the District Attorney's Office. In the days after Mr. Pelosi's arrest, Napa County followed the Department of Corrections' policy regarding the release of booking photos and mugshots. Mr. Pelosi received the same treatment under that policy that all individuals released from County Jail receive.

No state law specifically requires the release of booking photos or mugshots, but policies regarding this topic can vary by jurisdiction. Napa County updated its policy to reflect current best practices and align with the policies of similar jurisdictions. As such, Napa County is now making available to the media and the public the booking photo of Mr. Pelosi taken at approximately 4:30 a.m. on May 29, 2022, at Napa County Department of Corrections.