Did All of the Patients in a Puerto Rican Intensive Care Unit Die? 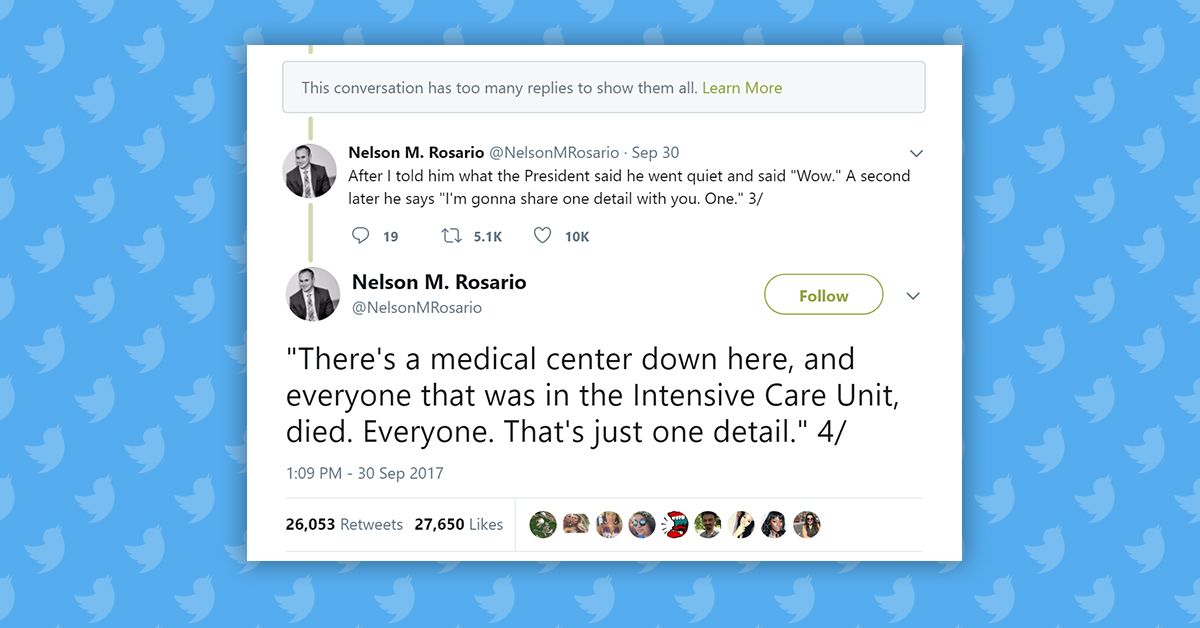 Claim:
All of the patients in the intensive care unit of a Puerto Rican hospital were killed by Hurricane Maria.
Rating:

In late September 2017, as accounts spread online about the scale of the devastation in Puerto Rico following Hurricane Maria, a Chicago attorney shared a story his father told him about the deaths of every person in one hospital's intensive care wing there, which dovetails with reports that the official death toll on the island territory is likely to increase dramatically.

On 30 September 2017, Nelson M. Rosario posted remarks on Twitter that he attributed to his father, who lives in the territory. According to Rosario, his father "is helping with rebuilding right now" and has friends who were both "elected and appointed" to the Puerto Rican government.

The Mayor of San Juan, who was very complimentary only a few days ago, has now been told by the Democrats that you must be nasty to Trump. Such poor leadership ability by the Mayor of San Juan, and others in Puerto Rico, who are not able to get their workers to help. They want everything to be done for them when it should be a community effort.

In response, Rosario wrote in a series of tweets:

After I told him what the President said he went quiet and said "Wow." A second later he says "I'm gonna share one detail with you. One.

"There's a medical center down here, and everyone that was in the Intensive Care Unit, died. Everyone. That's just one detail."

He said that's what should be tweeted at the President @realDonaldTrump, so that's what I'm doing.

The post containing his father's allegation has been retweeted more than 26,000 times: We contacted Rosario seeking more details about his father's anecdote. As of 30 October 2017, 51 deaths have been attributed to the hurricane. However, the local government reportedly allowed 911 bodies to be cremated and listed as deaths by "natural causes" without further investigation, prompting criticism from Sen. Elizabeth Warren (D-Massachusetts):

These reports are extremely troubling — they provide even more reason to be concerned about the accuracy of the information we're receiving. The Trump Administration needs to cooperate with Puerto Rican authorities and provide all the necessary resources to ensure the death toll is accurately counted.

On 3 November 2017, Cruz called the amount of cremations in the Buzzfeed report "an outstanding number" during an interview with CNN host Jake Tapper. She also agreed with Tapper's estimate that the death toll was "probably" closer to 500 people.

Puerto Rico Public Safety Secretary Héctor Pesquera said in an interview published by the nonprofit Center for Investigative Journalism on 2 October 2017 (when the death toll was at 16) that the number of dead is likely higher:

I believe there are more dead, but I don't have reports telling me [for example] eight died in Mayagüez because they lacked oxygen, that four died in San Pablo because they did not receive dialysis.

According to reporter Omaya Sosa Pascual:

When Pesquera was asked why the government insists on keeping the death toll at 16 nearly two weeks after the hurricane, and following multiple reports of additional victims, he said they have not added additional victims to the list because death certificates from deaths that occurred during those days in Puerto Rico have yet to be released, nor has it been possible to analyze the information to determine which were natural deaths and which were deaths related to emergency-related circumstances.

Reporter David Begnaud, who is covering Maria's aftermath from Puerto Rico, says that at least some of the deaths were "oxygen related" — in other words, people were unable to use breathing machines or oxygen tanks because they had no power after the storm:

On 3 October 2017, Rosario again criticized Trump after the president told Puerto Rican officials they "can be very proud" that 16 people had died compared to the 1,833 deaths caused by Hurricane Katrina in Louisiana in August 2005. Rosario wrote:

However, we have been so far unable to verify the specific story that Rosario first told.

Update [30 October 2017]: Updated death toll to 51; also noted that 911 bodies were cremated and listed as death by "natural causes" by the Puerto Rican government.