An article reporting that Paris was "under siege by Muslims" came from a fearmongering site that only publishes misinformation. 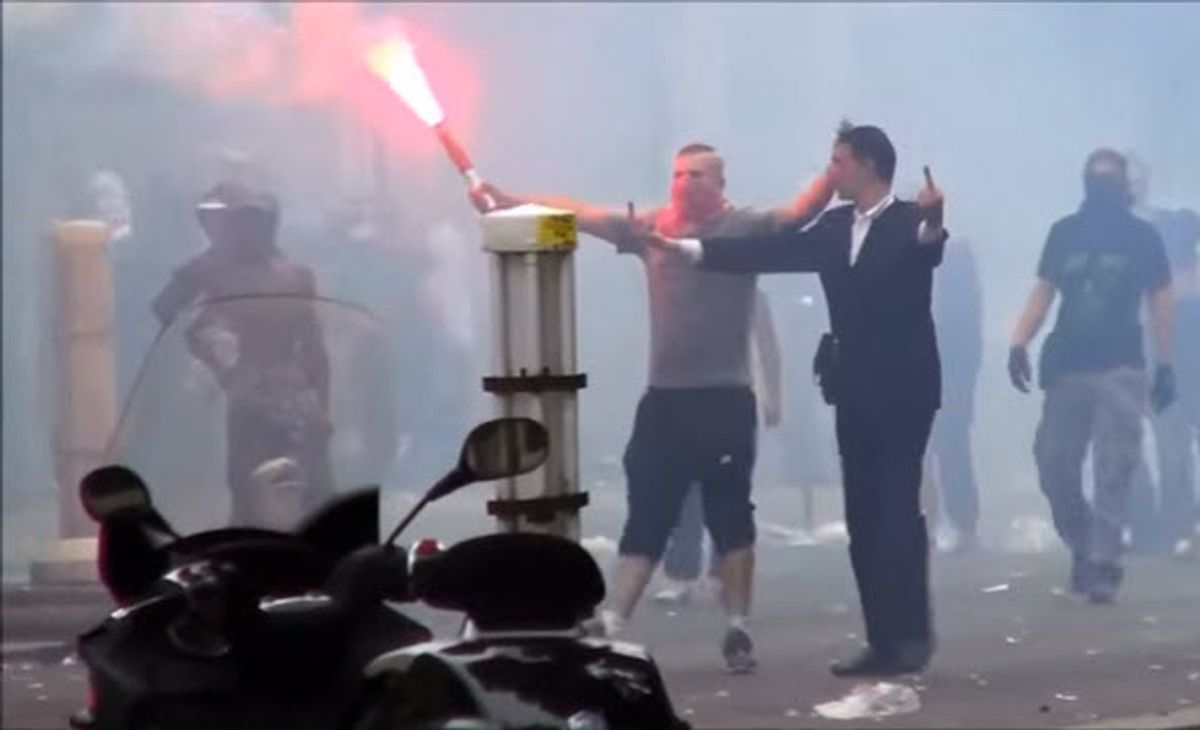 On 25 May 2016, the unscrupulous web site Superstation95 published an article claiming that Paris was "under siege" by Muslims, but that the rest of the world was unaware of the violence, thanks to a media blackout:

French and western news media are intentionally blacking-out FEROCIOUS RIOTS in Paris, refusing to provide any coverage of violence by savage Muslim beasts in Paris.

Hundreds of Parisians have been attacked and seriously injured by roving bands of Islamic Radicals, throwing stones, spears, smashing store and car windows and setting fire to anything they can.

The only evidence provided by Superstation95 to back up their terrifying — but unfounded — claims was a video (shown above) and a series of photographs that purported to show Muslims rampaging through the city. The bulk of these images, however, had nothing to do with a "siege" of Paris, by Muslims or by anyone else.

The lead photo for this fear-mongering article showed a police car on fire. While this arresting image was placed directly below the words "Paris Under Muslim Siege," the photograph is actually of an 18 May 2016 protest. The image was published by Reuters (a curious aspect, as Superstation95 claimed a media blackout was preventing news to get out of Europe) in an article about a rail strike that turned violent: After weeks of protests in which hundreds of their number have been hurt, police held a rally of their own to vent frustration over the stresses of near daily clashes with violent youths on the fringes of the anti-reform movement.

As they did so, a crowd chanting "police everywhere, justice nowhere" surrounded a police patrol car, which went up in flames after the police officers inside fled the scene, a few hundred metres from where their colleagues were rallying.

This article, as well as an article published by Al Jazeera about the incident, did not tie the incident to any religion.

While Superstation95 presented their article as though they were covering breaking news (they even concluded with a promise to update the story throughout the day), the majority of the photographs were taken two years ago during a demonstration in July 2014, nearly two years before the publication of their misleading story: The three men, aged 21 and 28, were given sentences of between six and 10 months for their part in the rioting in Sarcelles on Sunday.

A fourth man was given a suspended sentence while a minor received a fine.

Prime Minister Manuel Valls condemned the violence, which erupted at a protest over Israel's actions in Gaza.

At least 649 Palestinians, most of them civilians, and 31 Israelis have been killed in 15 days of fighting, as Israel targets militant rocket crews inside the densely populated Gaza Strip.

European Union foreign ministers condemned anti-Semitic incidents at Gaza protests across the EU when they met on Tuesday.

Superstation95 also published two videos purportedly showing violence that occurred on 25 May 2016. The web site also claimed that this footage never circulated on legitimate news outlets due to a news "blackout."  Actually, the footage featured in "Paris Under Muslim Siege 2 Riots, Killing, Arson May 25 '16" was taken from a video that was published in 2014:

Superstation95 provided no evidence to back its assertions. Instead, the site used outdated and unrelated media to bolster baseless and inflammatory claims that Paris was the scene of a "Muslim siege".