Did Draining the Paris Canal for First Time in 200 Years Yield 'Frightening Finds'?

A great headline does not always make for factual — or even interesting — reading. 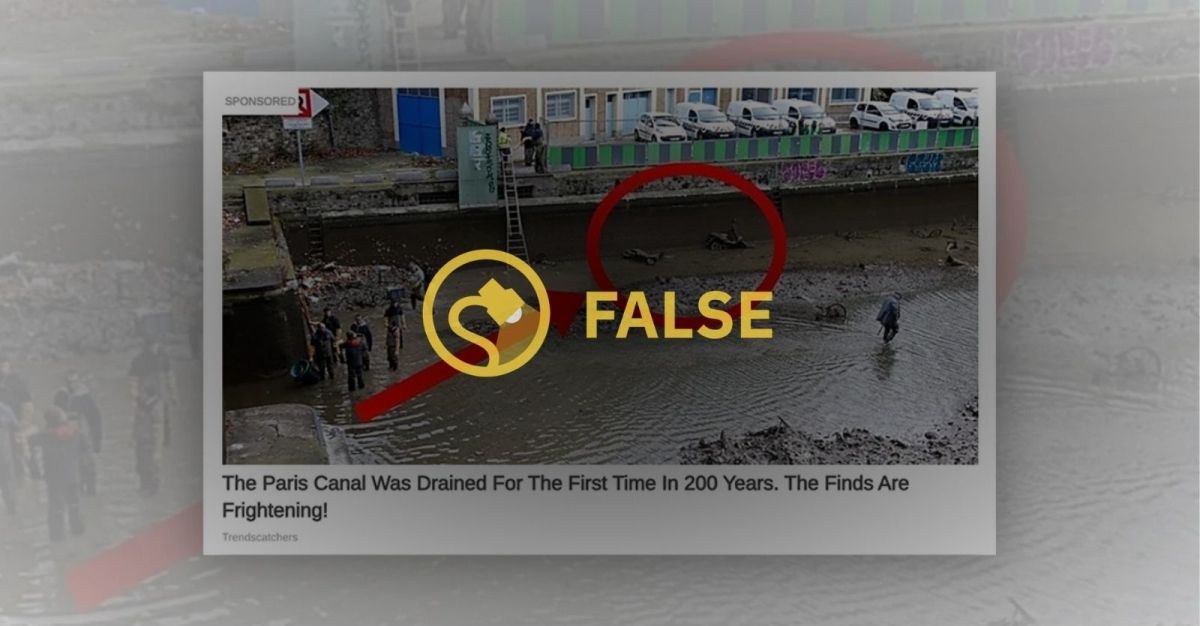 Claim:
The Canal Saint-Martin in Paris, France, was drained for the first time 200 years, leading to "frightening finds."
Rating:

The canal is drained approximately every 15 years — most recently in 2016 — and the "frightening" objects found in the canal bed at that time can best be described as regular trash.

A commonly occurring clickbait ad frequently pops up in the sponsored sections of many media publications. The headline presented by these ads reads "The Paris Canal Was Drained For The First Time In 200 Years. The Finds Are Frightening!" A variation of the ad also said: "Canal Drained For First Time In 200 Years. After They Find This Cops Are Immediately."

There is no need to click on this link. The headline is not factual. The canal in question is cleaned every 10-15 years. The finds were not "sinister" or "frightening." For those willing to scroll all the way to the end of the slideshow, they included a traffic cone, a beer can, and several bicycles.

The article primarily rehashes coverage of the 2016 draining of the Canal Saint-Martin. Prior to the 2016 cleaning, the canal had last been drained in 2001.

As reported by Agence France-Presse, "The rubbish tossed into the canal include[d] beer bottles, bicycles, lavatory bowls, rolled-up carpets and weapons, including a sawn-off gun."

As if anticipating the clickbait headlines that would appear years later, hydrobiologist Romain Zeiller, an official involved with the 2016 cleanup, joked to AFP that "We haven't found the body yet."

Because the clickbait headline misrepresents the rarity of canal draining as well as the fear-inducing nature of trash recovered, the claim is false.