Did a Chicago Man Use Frozen Jeans To Call Dibs on Parking Spots?

Frozen pants may be hilarious, but dibs is no joke. 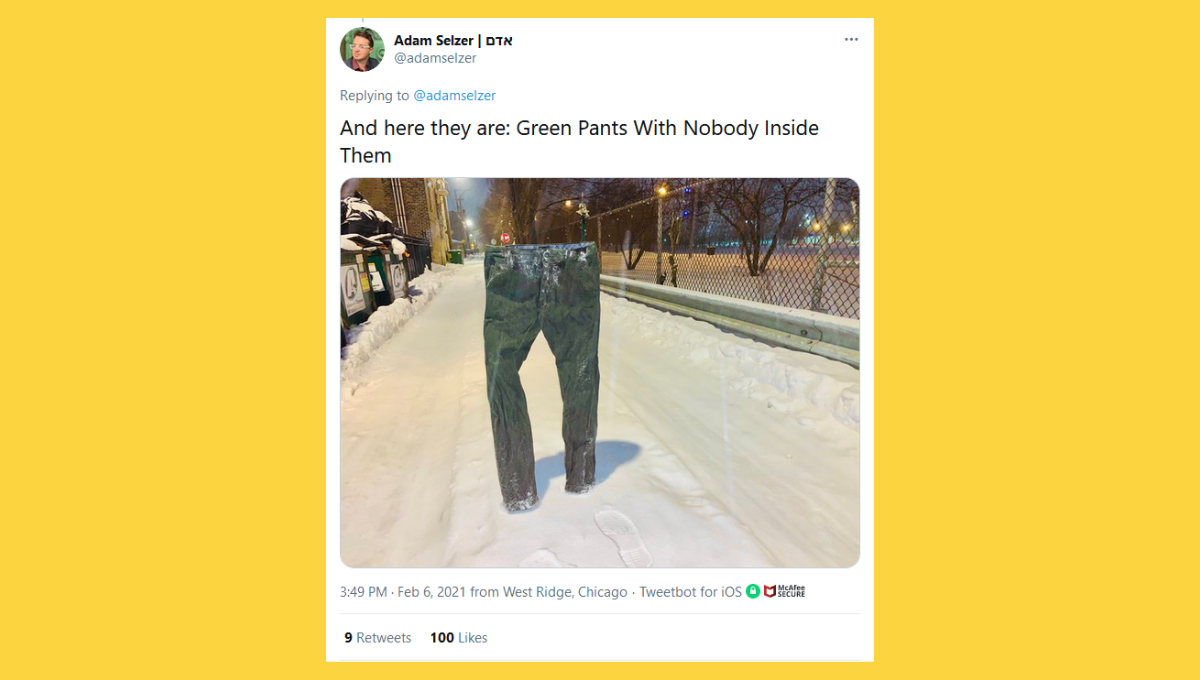 Chicago resident Adam Selzer has taken a series of photographs of pants that he froze in an upright, standing position, including one that showed pants in what looked like a parking space.

Selzer didn't say he was seriously using the frozen pants to call dibs on cleared-out parking spots; it appears to be more of an elaborate joke that he shared on social media.

Finding parking on Chicago streets during snow storms is no laughing matter — unless you're Adam Selzer.

The Chicago tour guide and historian has become something of a social media phenomenon for devising a way to freeze his pants so they look like they are being worn by an invisible person.

One of the photographs Selzer posted on Twitter made some believe that he was freezing the pants for the purpose of standing possessively empty parking spots or calling "dibs" on them. But Selzer pointed out in the tweet that the pants were placed in a no-parking zone, indicating it was just a gag:

Chicago experienced particularly cold weather with heavy snow in the winter of 2021, with more precipitation expected as of this writing. When snow arrives, Chicagoans are known for saving shoveled-out parking spots with various objects, as TV station WMAQ reported:

For those who live in Chicago, "dibs" is a way of saving the parking space you spent time shoveling.

Many residents get creative with the objects they use to save their spaces, with anything from chairs to tables to baskets to even basketball hoops on display.

Photographs included in the news story linked and quoted above show that Chicago residents may use items like basketball hoops or laundry detergent boxes for markers, but so long as the object is placed squarely in the snow-cleared parking spot, it's a signal to other drivers that the spot is spoken for.