Is This a Live Panda Flown from China to U.S. in Business Class?

A viral image purportedly shows a live panda cub seated next to a human being on a China Airlines. 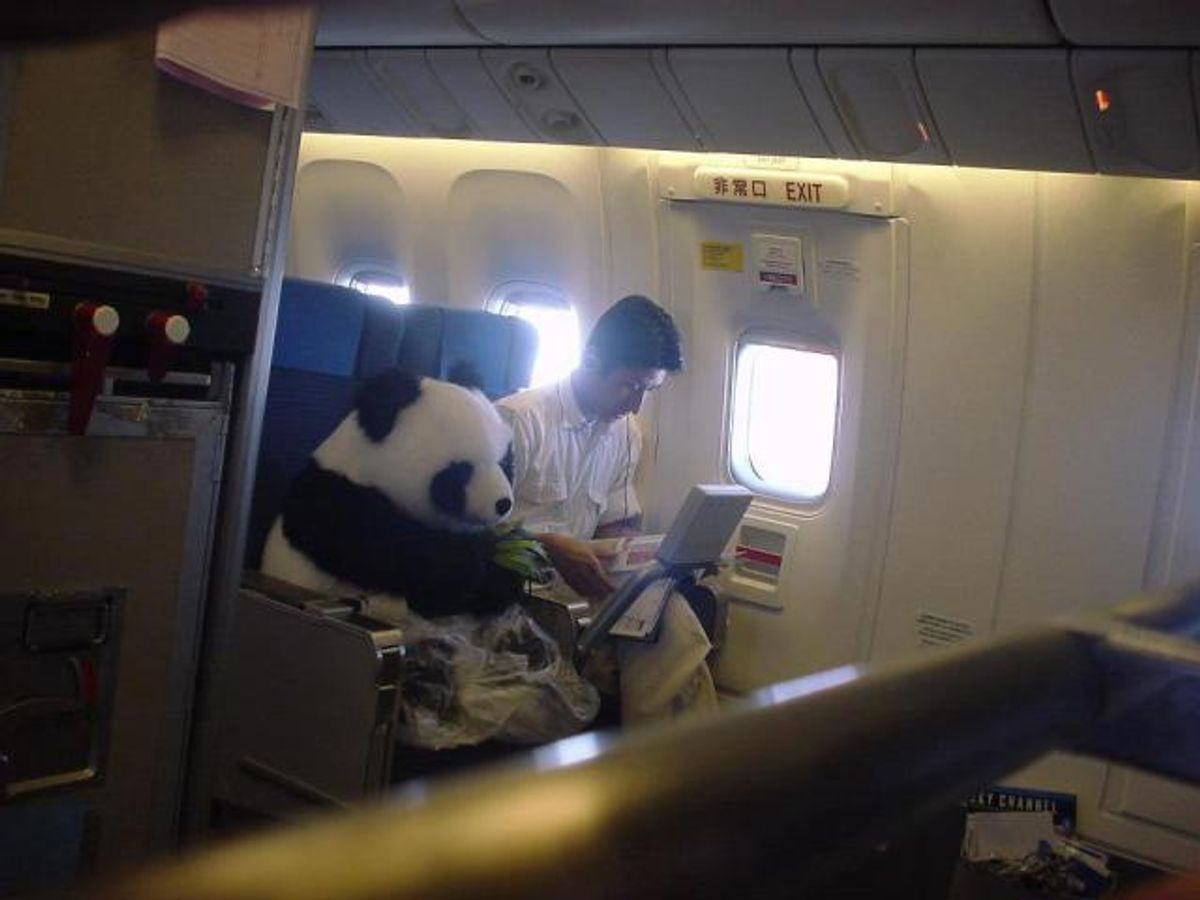 Claim:
Viral image shows a real panda seated next to a human being in the business class section of a jetliner.
Rating:

A photo of a giant panda cub serenely chewing on bamboo leaves while riding in the passenger cabin of a commercial airliner has been winging its way around the Internet since 2006. The earliest posting of it we've found was on a humor website called Guzer.com, where the original caption read:

I am guessing that this picture is fake but you never know. This may be a trained Panda Bear that is part of some type of act or something. :)

Ok, clearly we are reaching a nuff/no nuff event horizon here, so it's time for clear thinking and an explanation. Recognizing the colour scheme as China Airlines Airbus 787, I called their Public Relations department for an explanation. Unsurprisingly this picture is not unknown to them, and the sent me the press release that they had prepared ...

China Airlines is a proud corporate sponsor of the panda sanctuary at Cheng Du and was happy to help out recently with the transfer of a young panda cub to a zoo in the United States of America. After extensive consultation with the sanctuary’s veterinary staff it was concluded that the importance of the panda cub precluded it from traveling in the hold of the aircraft, where attending to its needs would be difficult. Thus China Airlines agreed to donate seats in its Business Traveler First cabin for the panda cub named Squee Squee and his carer, Fu Jiang Lang, seen here sitting in the window seat. In the interests of hygiene Squee Squee wore a plastic nappy to take care of panda poop during the flight. We are happy to report that Squee Squee arrived rested and relaxed after his 14-hour flight, and is settling into his new home well. During the flight we can report that he didn’t watch any of the flight movies as we couldn’t find a headset big enough for him. He did order the bamboo from catering menu, with a side of bamboo, and bamboo mousse for dessert.

But as delightful though the story of Squee Squee the panda cub traveling to the U.S. in the business class section of a China Airlines airbus may be, it's not to be taken seriously.

For one thing, the giant panda is an endangered species, and the whereabouts of the approximately 420 giant pandas in captivity is fairly closely monitored. We've found no record of the birth, death, or existence of a panda named Squee Squee in China, the United States, or anywhere else.

For another, even when raised in captivity, giant pandas are wild animals. Some airlines allow service animals and/or pets to ride in the passenger cabin, but a giant panda would not seem to fit in either of those categories.

Moreover, the emergency exit sign near where the panda is sitting appears to be written in Japanese, not Chinese. It's unlikely that this was a China Airlines airbus.

Lastly, on close examination, the panda in the photo — with its cute little round button nose — does not appear to be real. Actual giant pandas have triangle-shaped noses, as shown here: The most likely explanation is that the panda on the plane is a semi-realistic stuffed doll, and that the photo was staged — by whom, we don't know — as a public relations stunt. The humorous "Squee Squee" story was appended as an afterthought.