What Is 'Palindrome Week'?

Numerical palindromes, such as 12321, can be read the same forwards and backwards. 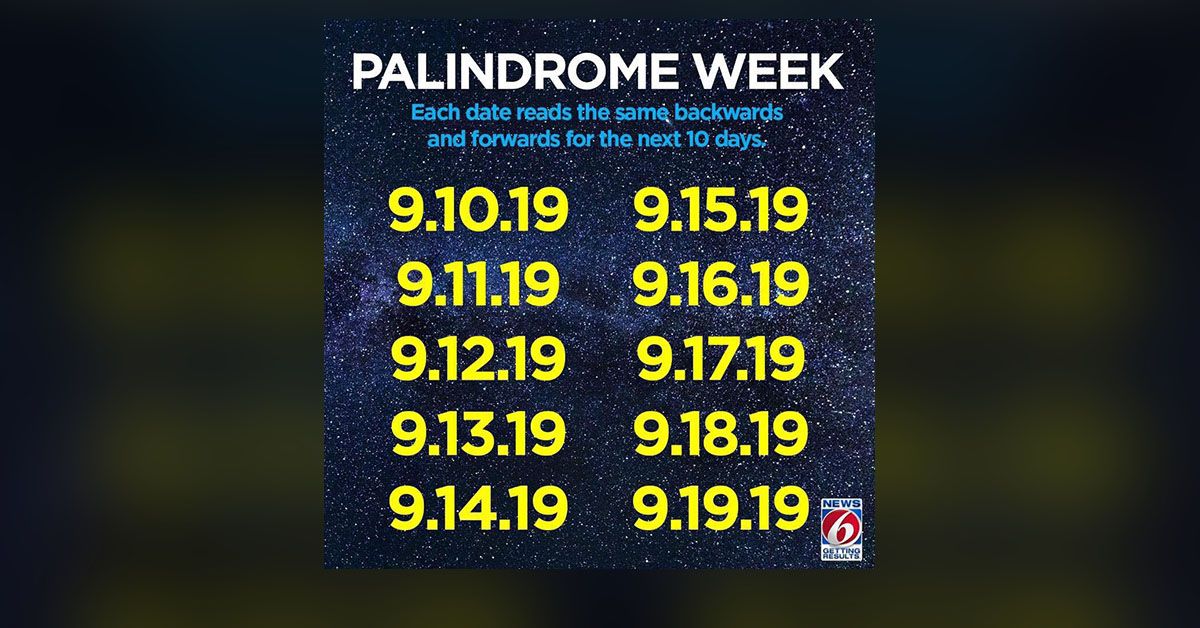 Claim:
A series of consecutive dates in September 2019 are numerical palindromes.
Rating:

Multiple dates in September 2019 are numerical palindromes (they can be read the same forwards and backwards) when the M-DD-YY format is used.

These numerical palindromes only appear when the date is formatted a specific way; palindrome week actually consists of 10 days, not seven; finally, this phenomenon isn't unprecedented.

Snopes readers have likely come across a few claims about odd or unusual calendar dates. Will the 22nd day of the 2nd month of the year on 2022 fall on Tuesday (or Twosday)? Yep. Will Halloween fall on Friday the 13th for the first time in 666 years? Nope. Does an August with five Mondays, five Sundays, and five Saturdays occur once every 800 years? Nope.

This genre of rumor may have made some people a bit skeptical when they came across a meme about a "palindrome week" in September 2019: The month of September will truly have 10 consecutive dates that can be read the same forwards and backwards. In other words, these dates are all numerical palindromes.

While this meme is largely accurate, we do have some pedantic quibbles with this claim. For one, in order for these dates to be palindromes they have to be written in the M-DD-YY format. If these dates included the full year, a "0" in front of the first 9 months, or if these dates were written using any other format (such as DD-MM-YY or MM-DD-YYYY) they would not result in palindromes. Furthermore, while "palindrome week" is a catchy title for this meme, September 2019 will have 10 palindrome dates, not seven.

Notice a pattern here? As long as you write your date in the m-dd-yy format, every century has 9 years with 10 Palindrome Days in a row. These years are always in the second decade of the century. For example, every year between 2011-2019, 2111-2119, and 2211-2219 will have 10 consecutive Palindrome Days. This is true for previous centuries as well.