A prominent, ongoing issue has been the expulsion of Palestinians from their homes and land. 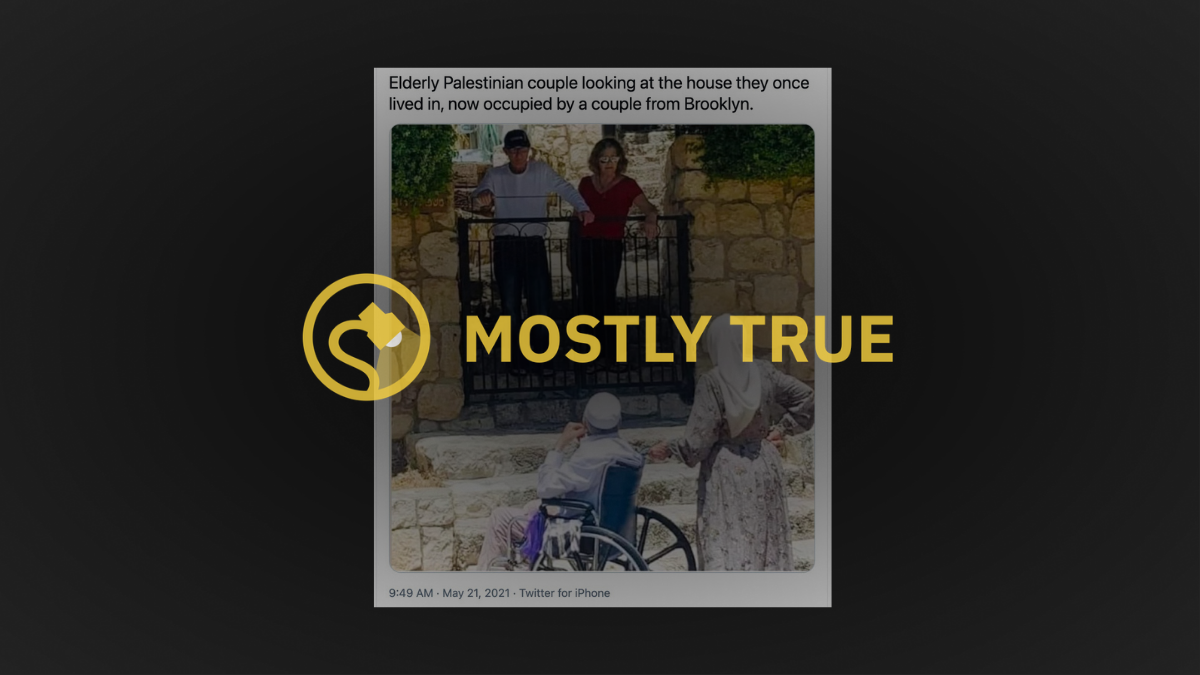 The picture comes from an Al Jazeera news report in which a reporter accompanied an elderly Palestinian couple visiting what was once the site of their home.

The Al Jazeera report doesn't state where the younger couple originated and doesn't say they were from Brooklyn.

On May 18, 2021, a Snopes reader shared a tip asking whether a picture circulating on social media is real. The screenshot shows an elderly couple looking at an area of gated property while another, younger couple standing inside the gate look back at them.

The picture had been shared with text stating it depicts a Palestinian couple viewing property they once owned and from which they were displaced so that a Jewish couple could live there. It's been shared as an illustration of expulsions of Palestinians in East Jerusalem so that Israeli settlers can move in on the land. In many versions of the picture, it's shared with accompanying text claiming that the younger couple originated from Brooklyn, New York.

Here is an example that was posted to Twitter, with the user's name cropped out for privacy: The picture is a screenshot taken from an Al Jazeera report in Arabic that was posted on YouTube with an English translation in May 2020 by Rima Najjar Merriman, a retired professor of English literature at Al-Quds University in the West Bank.

In the story, Al Jazeera reporter Najwan Simri accompanies an elderly couple, Abu and Hajjeh Im Samir, while they visit the location of the home they lived in decades ago in a village called Ijzim, south of Haifa. Their home, along with the the rest of the village, was seized by Jewish settlers in the 1948 Arab-Israeli war. The narration relates this terse exchange:

After a few minutes, the residents of the house come out to [the gate]. They ask us what we want. We say, this is the owner of the house; how do you feel living in a house built on the wreckage of his house? [The answer] Frankly, I don’t feel anything. I am very happy. Living here is very enjoyable.

The Al Jazeera report doesn't identify the couple now living in the home, nor does it report they are from Brooklyn.

Although the image predates violence that erupted in the area in May 2021, it is indicative of the issue at the root of it. What set into motion the chain of events that led to Hamas rocket launches and Israeli military airstrikes was Israel's attempt to expel Palestinian families from their homes in the East Jerusalem neighborhood of Sheikh Jarrah to make way for Jewish settlers.