Did Palestinians Dance at the UN After Nikki Haley Threatened to Cut Aid?

In the wake of the decision to move the U.S. embassy in Israel to Jerusalem, a viral video has spread with a false claim. 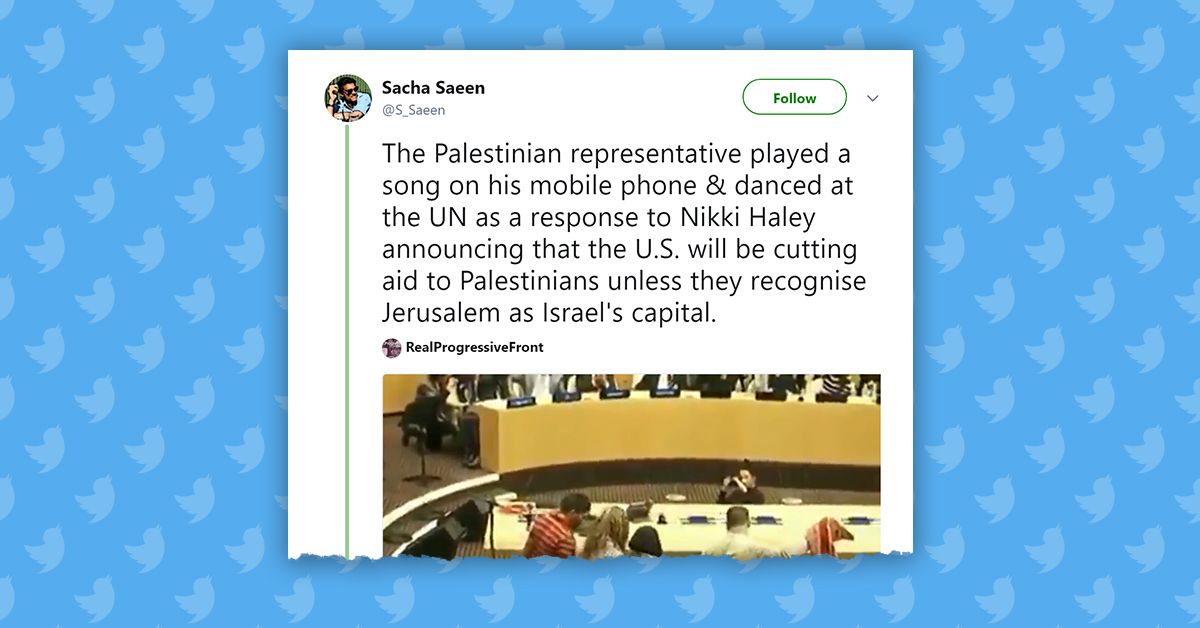 Claim:
A video shows Palestinian lawmakers dancing in response to Nikki Haley's threat to cut aid to the country in the wake of a controversial decision to move the U.S. embassy to Jerusalem.
Rating:

So how did the people of Palestine react? According to a viral (but inaccurate) tweet, the Palestinian representative at the UN put a song on his phone and started to dance:

The Palestinian representative played a song on his mobile phone & danced at the UN as a response to Nikki Haley announcing that the U.S. will be cutting aid to Palestinians unless they recognise Jerusalem as Israel's capital.pic.twitter.com/MGs0H3D5TU

This tweet (which was, as usual, immediately and uncritically picked up and disseminated by self-styled pundits) got just about everything wrong. The video was not taken in January 2018, the music is not coming from a mobile phone, and it has little to do with Nikki Haley or the U.S. decision to recognize Jerusalem as the capital of Israel.

This video, which is from 2013, shows Arab Idol winner Mohammed Assaf performing at the United Nations in New York to mark the International Day of Solidarity with the Palestinian People:

Assaf also addressed the U.N. before his performance:

“In Gaza, children like me grow in an environment laden with challenges and in an unbelievable way. Many of our parents suffer to find job opportunities or strive hard to put some food on the table,” Assaf said in his U.N. address.

“There are also the struggle, the isolation and the blockade. Sometimes it seems as if there is no escape,” he added.