Does Using a Recharging Cell Phone Pose a Serious Threat of Electrocution?

A viral TikTok video claimed "electric waves" from the outlet "will come through your body." That's misleading. 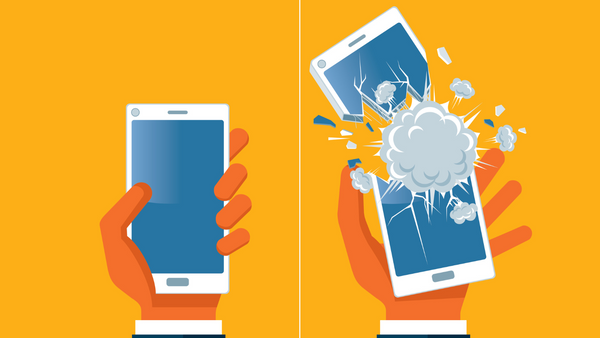 Claim:
Using a cell phone while it is being recharged poses a serious threat of electrocution.
Rating:

Cell phone users generally do not risk serious electrocution if, or when, they use devices while they're charging. However, some low-quality chargers or faulty batteries could represent a small risk of electrocution, burns, or fire, as reported by Agence France-Presse.

For nearly two decades, the Snopes newsroom has received questions from readers about a rumor that using a charging cell phone — whether for calls, texts, social media scrolling, or so on — puts the user at risk of electrocution. The inquiries were a response to messages, like the one in a viral TikTok video, supposedly warning cell phone users of the threat.

In the TikTok video, a narrator supposedly uses a voltage stick to gauge the "power" — or voltage — circulating between the outlet, phone charger, device, and a user. "If someone is talking on the phone while the phone is charging, the electric waves will come through your body," the narrator claimed, while the voltage stick lit up to supposedly show the cell phone user's energy levels change with the device plugged in.

But, as Eric Yeatman, head of Imperial College London’s Electrical and Electronic Engineering department, told Agence France-Presse (AFP) in 2021, while it was possible the voltage stick indeed detected "tiny amounts" of energy traveling between the outlet and the cell phone user, that level of low voltage was "generally harmless." Also, he said, other handheld appliances or devices would do the same thing.

“A phone charger has a unit at the wall end that converts dangerous mains voltage to harmless low voltage DC which travels along the lead and into your phone,” Yeatman told AFP. “This is true for anything you hold while it’s plugged into the wall, like a kitchen hand blender."

Andrew Wood, who chairs the Department of Health and Medical Sciences at Swinburne University of Technology in Melbourne, told the news outlet that a voltage stick like the one in the video would also react to a balloon that had been rubbed fabric. Furthermore, the World Health Organization said “current evidence does not confirm the existence of any health consequences from exposure to low level electromagnetic fields” like those detected by the voltage stick.

The TikTok video was just the latest iteration of the cell phone rumor, which, for years, appeared in emails to Snopes asking whether there was any credibility behind warnings to avoid using the devices while they're chargin. In September 2004, for instance, someone shared with us the following message:

I send this message to make you aware of the danger potential of the commonly used cellular phone. A few days ago, this following person was recharging his cellphone at home. Just at that time a call came and he attended to that call with the instrument still connected to the mains. After a few seconds electricity flowed into the cellphone unrestrained and the young man was thrown to the ground with a heavy thud. His parents rushed to the room only to find him unconscious, with weak heartbeats and burnt fingers. He was rushed to the nearby hospital, but was pronounced dead on arrival.

Cellphone is a very useful modern invention. However, we must be aware that it can also be an instrument of death. Never use the cellphone while it is hooked to the mains! This is my humble plea.

Then, three years later, in November 2007, Snopes received this email including images supposedly showing the aftermath of a deadly cell phone explosion:

READ THIS!!!! IMPORTANT FROM THE UNIVERSITY OF MIAMI HOSPITAL ….VERY SERIOUS WARNING…

Please beware and be fore-warned. Even though I always knew that this is a dangerous habit, I must confess that I had sub-consciously practiced it in the past, so this is also a wake-up call to myself.

Be safe and be blessed.

Never, ever answer a cell phone while it is being RECHARGED!!

A few days ago, a person was recharging his cell phone at home. Just at that time a call Came in and he answered it with the instrument still connected to the outlet. After a few seconds electricity flowed into the cellphone unrestrained and the young man was thrown to the ground with a heavy thud. As you can
see, the phone actually exploded. His parents rushed to the room only to find him unconscious, with a weak heartbeat and burnt fingers. He was rushed to the nearby hospital, but was pronounced dead on arrival. Cell phones are a very useful modern invention. However, we must be aware that it can also be an instrument of death.

Pass 2 all your contacts. Today again a boy died in Mumbai, Bcoz of attending a call while his mobile was at charge. That time he had sudden vibration 2 his heart & fingers were burnt. So pls don’t attend calls while charging ur cel. Pls pas this 2 al whom u care. 1 USEFUL MSG IS BETER than MANY jokes..

Different iterations of that rumor — someone in recent days supposedly died from an exploding cell phone, or electrocution as a result of the device charging — described the deceased in a variety of ways, including "a close relative" of the message's author.

Based on our research, the emails appeared to be retellings of an Aug. 11, 2004, news story out of Chavara, India. According to articles by the Press Trust of India (a news agency) and the New Indian Express (a newspaper), a man named K. Viswajith was electrocuted when he answered his cell phone while it was plugged in for recharging. The news articles contained no information about the type of cell phone or what caused it to electrocute its owner.

Similar reports of cell phones supposedly exploding, starting fires or electrocuting their users also made news in 2004, including:

Worldwide, a number of cells exploded the year prior, in 2003, a great many of them Nokia phones. According to Nokia, third-party or counterfeit batteries were to blame: In each and every exploding phone case it investigated, the battery in question proved not to be original to the unit and not to have included industry-standard safety measures. Nokia also found the vast majority of short circuits that led to these explosions were caused by the units having undergone traumatic events (such as being dropped) that jeopardized the integrity of poorly-manufactured batteries.

The stories continued after that. In 2013, the Chinese news agency Xinhua reported that a 23-year-old woman from the Xinjiang region had been electrocuted when she took a call on iPhone 5 while it was being charged. Information about that case was scant and whether the incident actually took place as reported was not confirmed.

All of this said, the practice of using a recharging cell phone does not in itself pose a serious danger. Rather, the quality of the phone's battery or charger could represent a small risk.

Manufacturing standards vary from country to country, so it should not be assumed all cell phones are built to the same specifications no matter where they come from, or that the quality of workmanship is consistent across the board. In lands where regulations regarding how safe electronics must be before they are allowed on the market are more lax, or where enforcement of those laws is haphazard, defective units that could prove dangerous to their users are far more likely to get into the hands of consumers.

'If you have a cheap knock-off charger then the mains leakage is likely higher, but still not causing you any harm unless it fails completely, in which case you could be electrocuted,' Yeatman said. He said he was not aware of that ever happening.

'The bigger danger from cheap chargers is that they fail and catch fire,' said Yeatman.

Costas Constantinou, Professor of Communication Electrodynamics at the University of Birmingham said by email that the only theoretical danger is 'if the integrated battery pack of the mobile phone was damaged it would present an elevated burn hazard during charging.'

He added there are well-documented instances of the potential fire hazard posed by lithium-ion batteries, the ones used in mobile phones, 'but those have absolutely nothing to do with the erroneous claims of the post in question.'

In sum, while some low-quality chargers or faulty batteries could represent a small risk of dangerous malfunctions, cell phone users generally do not need to fear electrocution if, or when, they use devices while they're charging. For those reasons, we rated this claim "Mostly False."

2 September 2004.
The Nation.   “Warning to Cell Phone Users: Stay Away from Power Poles.”

11 August 2004.
Reuters.   “Apple to Probe Death of Chinese Woman Who Used iPhone When It Was Charging.”

This article was updated to meet Snopes' current formatting and rating standards, as well as to include reporting by Agence France-Presse.