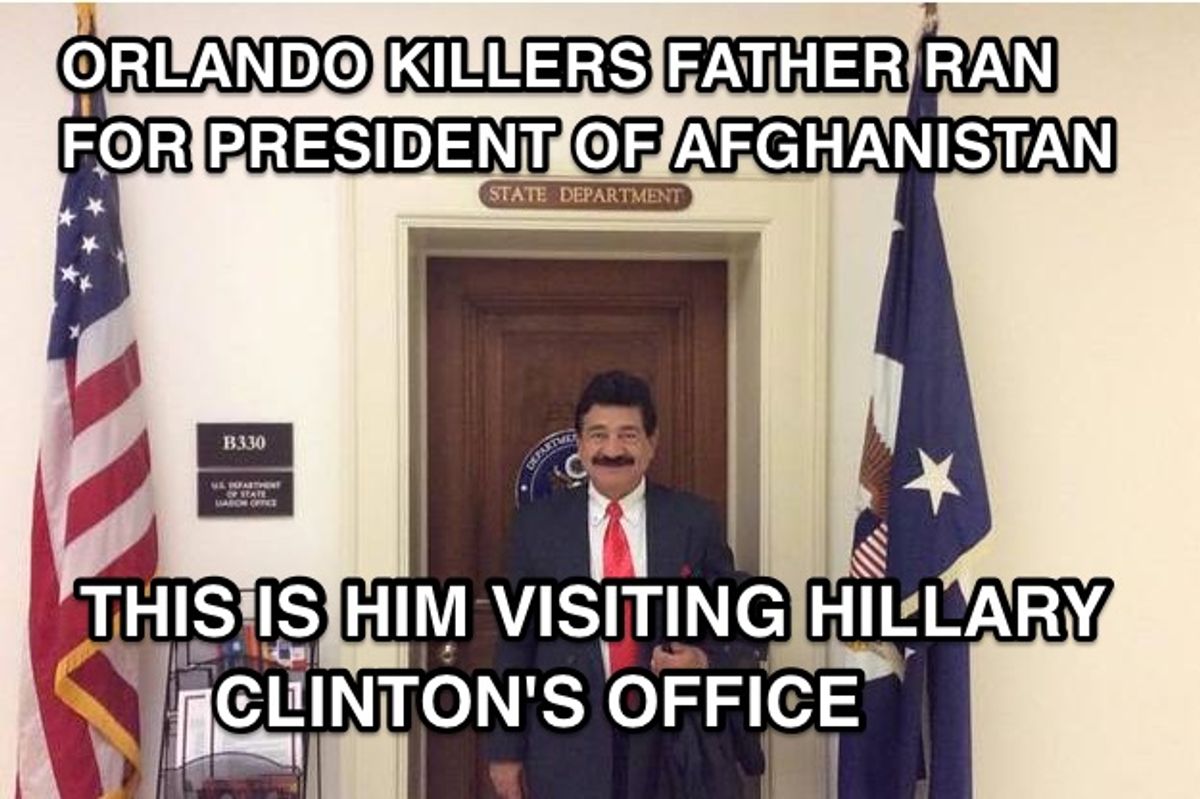 A photograph depicts Seddiwue Mateen at the State Department in April 2016.

Hillary Clinton vacated the office of Secretary of State in 2013, so Mateen couldn't have been visiting her at a State Department office in 2016.

I really have to wonder about this.

The father of the Orlando mass murderer has been a frequent visitor to Washington. He has had several meetings with Hitlery Clinton’s State Department.

Seddique Mateen, pictured below, is also a candidate for President of Afghanistan. Hmmmm.

Is it not plausible that Seddique encouraged his son’s evil act to drum up overwhelming support amongst the very anti-American Afghan electorate in an effort to win the presidential election? Just sayin’.

The article included the image, captioned with a claim that Seddique Mateen was "visiting Hillary Clinton's office," speculating that he had encouraged his son's death to further his own political ambitions:

It's true that the image was not in widespread circulation until after the 12 June 2016 Orlando Pulse shooting, but false that Mateen was shown "visiting Hillary Clinton's office." The photograph was among more than a dozen published by the British tabloid Daily Mail, and its caption indicated that the images were taken in April 2016 (years after Clinton vacated the office of Secretary of State in 2013): The implication Mateen had ties to Hillary Clinton was clear in the caption, but easily proved false. In April 2016 John Kerry served as Secretary of State, and Clinton was busy working on her presidential campaign.

Mateen hosts a fringe political show on Afghan-Pakistan issues, and one video shows him declaring himself as a candidate for Afghanistan's presidency:

The Afghan-born father of Omar Mateen, the man police identified as the gunman who killed 50 people at a packed gay nightclub in Florida on Sunday, is a fringe political commentator who rails against Pakistan and Afghan President Ashraf Ghani.

Seddique Mateen, who public records indicate is the father of Omar Mateen, had an occasional television show on a U.S.-based Afghan satellite channel for about three years, and has continued to post political commentaries on his Facebook page as recently as Sunday.

The web site Powdered Wig Society frequently leverages moments of widespread fear to advance misinformation or untruths. Previous items falsely claimed that President Obama gave Navajo land to refugees, that 10,000 Syrian refugees arrived in New Orleans days after the November 2015 attacks in Paris, and that an unofficial "civil war" had erupted in Sweden over an influx of refugees.