Was This the Original Mount Rushmore Design Before Funding Ran Out?

Initial designs showed the four presidents in their suits. 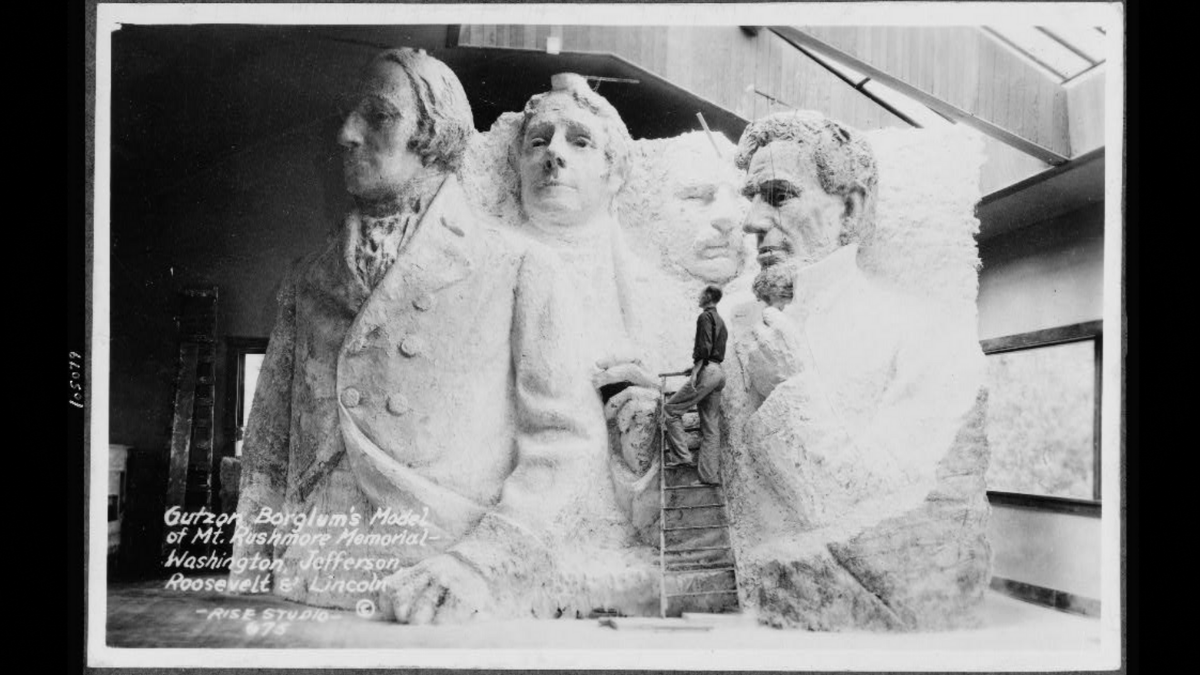 Claim:
A photograph shows the original design of Mount Rushmore — complete with each leader’s suited bust — before funding ran out.
Rating:

Albeit a major difficulty, funding was but one obstacle to the completion of Mount Rushmore. The sculptor also faced issues with workers and receiving permission, as well as geological challenges and the impending American involvement in World War II.

Sculpting Mount Rushmore was anything but a simple task. With 60-foot sculptures depicting the likenesses of four presidents, the 14-year project faced several challenges, including, as one Reddit post claimed, a half-finished design resulting from a lack of funding.

This claim is partly true. A closer look at National Park Service (NPS) document revealed that along with financial difficulties, the monument’s creator was also faced issues with workers and obtaining permission, as well as geological challenges and the impending American involvement in World War II.

Hosted by the Library of Congress, the image featured in the meme indeed depicts the original design, sculpted into plaster, of Mount Rushmore at one-twelfth the size of its anticipated height. A similar image showed the men from head to waist in suits and was described by the National Park Service as “the final version of the plaster model used to carve Mount Rushmore located in the second studio at Mount Rushmore which was built in 1939 and finished in 1940.” Located in the Black Hills of South Dakota, Mount Rushmore was originally envisioned by Idaho-born sculptor Gutzon Borglum, who intended each figure to be its own standalone statue complete with detailed clothing from their respective time periods, according to South Dakota Public Broadcasting.

But that’s not exactly how it played out.

In 1927, President Calvin Coolidge promised federal funding for the project, and U.S. Treasury Secretary Andrew Mellon secured full funding under the Mount Rushmore National Memorial Act, but Borglum declined, saying that he would only accept half and match the rest with private donations dollar for dollar, according to NPS. This, as it would later be revealed, was a major oversight. In total, the bill authorized funds up to $250,000 (equivalent to $4 million in 2022). As the Depression struck the U.S. in the 1930s, then-Sen. Peter Norbeck of North Dakota worked to maintain that construction would continue through emergency relief programs that were part of President Franklin Roosevelt’s New Deal, a program aimed at providing jobs to Americans through the construction of infrastructure, among other things. Funds from the New Deal were then matched with money allocated in the original bill. Funding was erratic and unpredictable and when the money ran dry, so did the work, reported PBS.

In the last two years of construction. Borglum traveled to secure funding while his son, Lincoln, would supervise construction. He died in Chicago following surgery on March 6, 1941. His death and the project’s lack of funds, coupled with logistical issues and the impending American involvement in World War II, ultimately led to the project being declared complete on Oct. 31, 1941.

In total, the monument construction rang in just shy of $1 million dollars at the time, the equivalent of about $19 million in 2022, with about $836,000 coming from the federal government.

The missing busts is not the only detail where construction fell short of the original design. Borglum also envisioned an entablature to be carved in an area that was shaped like the then-territory of the Louisiana Purchase with three-foot tall letters. Inconsistencies in the rock required that the presidential figures be relocated to where the entablature was to be placed. Borglum also figured that the words would be too difficult to read from below and scratched the idea completely.

Rife with a controversial history, today Mount Rushmore is largely recognized as a misplaced monument located on land stolen from the Native American Lakota (also known as Sioux) people, who called the granite formation Tunkasila Sakpe Paha, or Six Grandfathers Mountain, noted National Geographic. As we have previously reported, the monument has a dark history of ties to the KKK and an illegal war. drkmatterinc. “The Original Design of Mount Rushmore before Funding Ran out in 1941.” R/Interestingasfuck, 12 Jan. 2022, www.reddit.com/r/interestingasfuck/comments/s2f8qr/the_original_design_of_mount_rushmore_before/.

Jackson, Nicholas. “Picture of the Day: Mount Rushmore as Originally Planned.” The Atlantic, 16 May 2011, https://www.theatlantic.com/technology/archive/2011/05/picture-of-the-day-mount-rushmore-as-originally-planned/238920/.