Did an Orangutan Try To Fight a Bulldozer Razing a Forest? 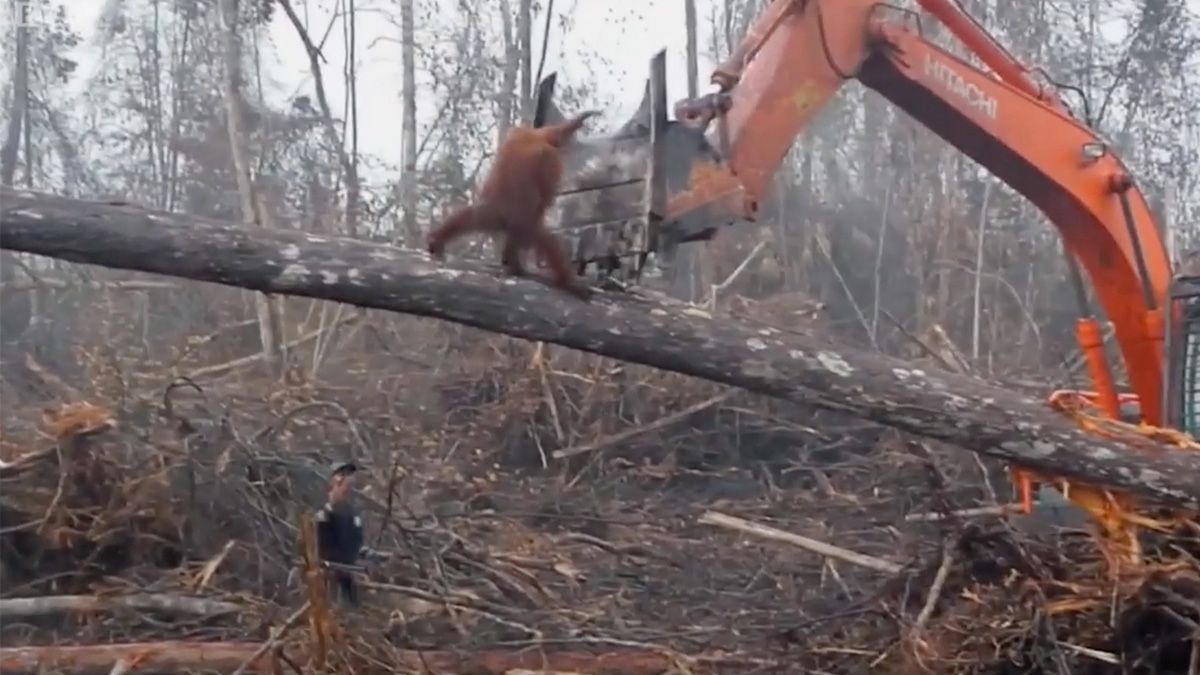 A 2013 video of an orangutan fighting off a bulldozer to protect its forest in Borneo Indonesia went viral in 2022. (Image Via Reddit)

Claim:
A video shows an orangutan trying to fight off a bulldozer razing an Indonesian forest.
Rating:

On Jan. 3, 2022, a video was posted to Reddit with the caption: "An orangutan tries to fight off a bulldozer destroying his forest." It received tens of thousands of upvotes on the r/Damnthatsinteresting and r/nextfuckinglevel subreddits.

It was true that the video showed an orangutan trying to fight off the bulldozer as it destroyed the forest in which it lived. This was perhaps one of many times that animals have engaged with deforestation equipment in the past. However, what made this encounter different was the fact that it was captured on video.

An orangutan has been filmed seemingly defending its home from being demolished by loggers.

The animal was seen fruitlessly lashing out against a digger in the Sungai Putri forest in Borneo, Indonesia as loggers bulldozed through.

The video, which was reportedly filmed in 2013 but only released on Tuesday, was shot by International Animal Rescue, an animal welfare charity.

We looked back in the video library for International Animal Rescue's Facebook page and found the old clip.

According to the post, the footage was first made public in 2018.

The video of the orangutan fighting off the bulldozer was first featured in the 2018 documentary, "Red Ape: Saving the Orangutan." It aired on BBC2 on May 10.

According to Orangutan Foundation International, "palm oil is the leading cause of orangutan extinction":

It’s in 50% of all household and food products sold in the West. It’s an ingredient in shampoo, toothpaste, detergent, frozen microwave dinners, cookies, peanut butter, lotion, makeup and much more!

Palm oil is a type of vegetable oil made from the fruit of the African oil palm tree, which originates in West Africa. However, it can be grown successfully in any humid tropical climate and has taken a strong foothold in Indonesia.

Not only is Palm Oil bad for the environment, and a major cause of climate change, but it is also the leading cause of orangutan extinction.

Every year it is estimated that between 1,000 to 5,000 orangutans are killed in palm oil concessions. That is a significant portion of the wild orangutan population which is lost, without fail, every single year. Borneo orangutans (Pongo pygmaeus) are seen in Salat Island as haze from the forest fires blanket the area at Marang on September 15, 2019 in the outskirts of Palangkaraya, Central Kalimantan, Indonesia. Illegal blazes to clear land for agricultural plantations have raged across Indonesia's Sumatra and Borneo islands. (Photo by Ulet Ifansasti/Getty Images)

'The Brutal Treatment of Women'

On Nov. 17, 2020, the Associated Press published a comprehensive investigation that looked at the "hidden" human element of the palm oil industry. The reporting documented allegations that went much deeper than simply destroying the homes of orangutans:

Palm oil is found in everything from potato chips and pills to pet food, and also ends up in the supply chains of some of the biggest names in the $530 billion beauty business, including L’Oréal, Unilever, Procter & Gamble, Avon and Johnson & Johnson, helping women around the world feel pampered and beautiful.

The Associated Press conducted the first comprehensive investigation focusing on the brutal treatment of women in the production of palm oil, including the hidden scourge of sexual abuse, ranging from verbal harassment and threats to rape. It’s part of a larger in-depth look at the industry that exposed widespread abuses in the two countries, including human trafficking, child labor and outright slavery.

Women are burdened with some of the industry’s most difficult and dangerous jobs, spending hours waist-deep in water tainted by chemical runoff and carrying loads so heavy that, over time, their wombs can collapse and protrude. Many are hired by subcontractors on a day-to-day basis without benefits, performing the same jobs for the same companies for years – even decades. They often work without pay to help their husbands meet otherwise impossible daily quotas.

In regards to the video of the orangutan and the bulldozer, in sum, it was true that the animal engaged with the machine that was being used to destroy the forest. The clip was captured in 2013 in Indonesia.