Does Photo Show an 1895 Car Crash Involving the Only 2 Cars in Ohio? 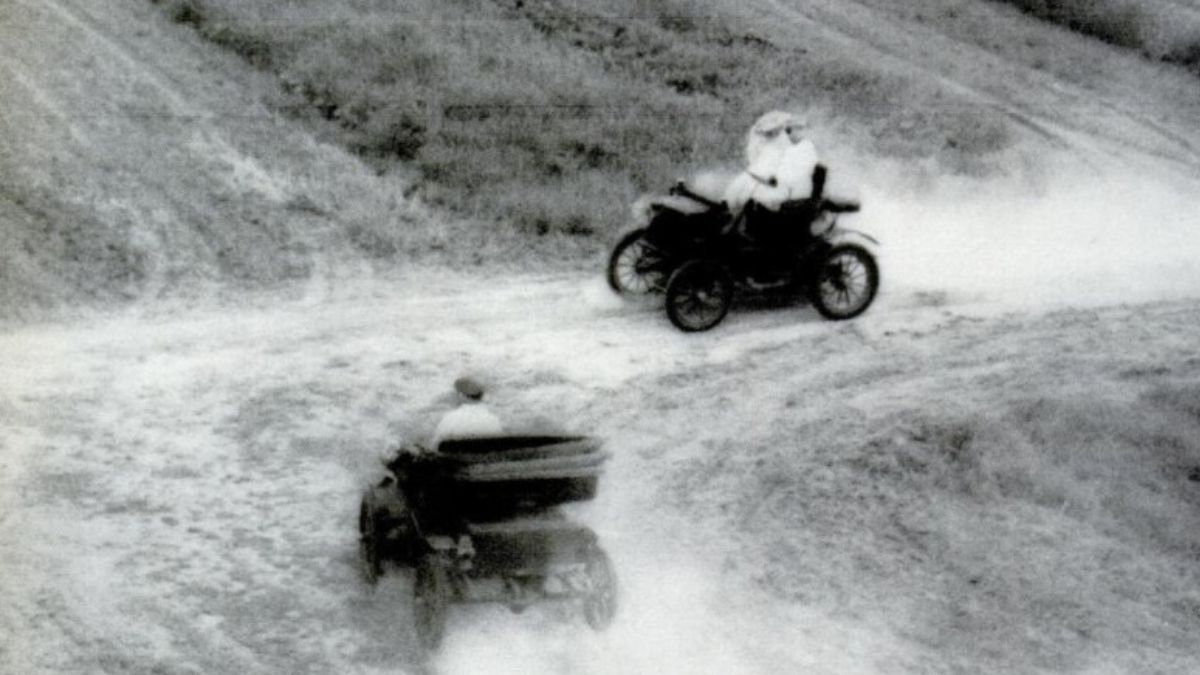 Claim:
A photograph shows a car accident in 1895 involving the only two cars in Ohio.
Rating:

There is no documentation to support the claim that the only two cars in Ohio at the time crashed into one another in 1895. This rumor is almost certainly a modern day invention, and the photographs commonly attached to this claim are unrelated.

One common claim that is often circulated on social media holds that there was a car accident in 1895 that involved the only two cars in the entire state of Ohio. We've been unable to find any documentation showing that such a crash occurred and the above-displayed photograph certainly wasn't taken in 1895.

John Mohr, the Executive Director of the Society of Automotive Historians, told us that the cars in this picture were not available in 1895. Rather, these vehicles were likely manufactured decades later in the late 1920s or early 1930s.

Mohr, a native of Ohio, told us that he had heard this rumor a number of times but that he had never seen any documentation to prove that this crash took place as described. The crash was possible, according to Mohr, as there were some privately owned automobiles in Ohio at the time, but as the state didn't start keeping track of registrations until 1908, it's impossible to tell how many cars were in operation in the state at the time.

As private automobiles were quite novel at the time, it's likely that a car crash in 1895 would've made headlines. We found numerous news articles about automobile crashes in the late 1890s and early 1900s, but we're able to find any reports about the only two cars in Ohio crashing into one another.

While we've found no evidence to support this curious car crash claim, Ohio is home to a historically significant automobile accident. In 1891, the state saw what may have been the world's first car crash involving a gasoline powered vehicle. According to Ohio History Central, an Ohio history website run by the historical society Ohio History Connection, the first gas-powered automobile accident took place in 1891 and involved a single-cylinder gasoline automobile and a tree root.

In 1891, James William Lambert was involved in the first automobile accident in American history. The accident occurred in Ohio City, Ohio. Lambert's vehicle, the first single-cylinder gasoline automobile, which was carrying Lambert and James Swoveland, hit a tree root, causing the car to careen out of control and smash into a hitching post. Injuries from this accident were minor. Lambert proceeded to patent over six hundred inventions, mostly affiliated with the automobile industry.

An accident in Ireland preceded this crash by more than 20 years, but that crash involved a steam-powered vehicle. The Atlantic reported that an astronomer and naturalist named Mary Ward was the first person to be killed in an automobile accident when she was thrown from her cousin's vehicle and run over.

In August 1869, Mary Ward took a badly needed holiday at her cousin’s castle in the Irish midlands west of Dublin. Ward was an active naturalist and astronomer, working hard to carve out a place for herself in the overwhelmingly male world of Victorian science. She was also raising eight children more or less alone. She needed some rest, and when someone at the castle suggested taking her cousin’s homemade automobile out for a spin, Ward went along.

In August 1869, when Ward visited her cousin’s castle, someone suggested taking the steam mobile out for a spin, and Ward agreed. There’s no record of who sat where, but four other people piled in as well. The party decided to circle the town green in Birr. According to one witness, the driver was “traveling at an easy pace” as he approached the turnaround point near Saint Brendan’s Church and rounded a corner.

What happened next isn’t clear. Perhaps a wheel hit a rock or a pothole. Perhaps homemade cars in 1869 just didn’t run very smoothly. Regardless, the overcrowded carriage jolted during the turn, and Ward was bucked off. A second later, she hit the ground, and one of the huge iron wheels crushed her.

Where Does This Story Come From?

There's no evidence that the only two cars in the state of Ohio crashed into one another in 1895. So where does this story come from? The closest we could get to "documentation" of this event comes from an advertisement for Mobile gasoline that was published in Life Magazine in 1967. That ad included a different photograph (one that we have not been able to find a source for) and a single sentence about this alleged 1895 car crash. This is not historical documentation of a car crash. It's entirely possible that this anecdote was invented simply as a jumping off point for Mobil to make a somewhat confusing point about car accidents. (The Swedes did not lower car accidents by deciding that "life is sweet" and "they want to live." The ad refers to Dagen H, the day Sweden switched from driving on the left-hand side of the road to the right. While this was viewed as a success at the time, car accidents returned to "normal levels" in the years since the switch.)

The claim that the only two cars in Ohio crashed into one another in 1895 is not supported by evidence. This anecdote appears to have originated with a 1967 advertisement and viral versions of this claim employ unrelated photographs of cars too modern for the time.

When and Where Was the First Car Accident? 6 Dec. 2012, https://www.mentalfloss.com/article/31807/when-and-where-was-first-car-accident.