Only 60 of 1,566 Churches in Houston Opened to Help Hurricane Harvey Victims?

A meme claiming that only 4 percent of churches in Houston opened their doors to Hurricane Harvey victims appears to have originated on a satirical Facebook page and was not based on any legitimate statistics. 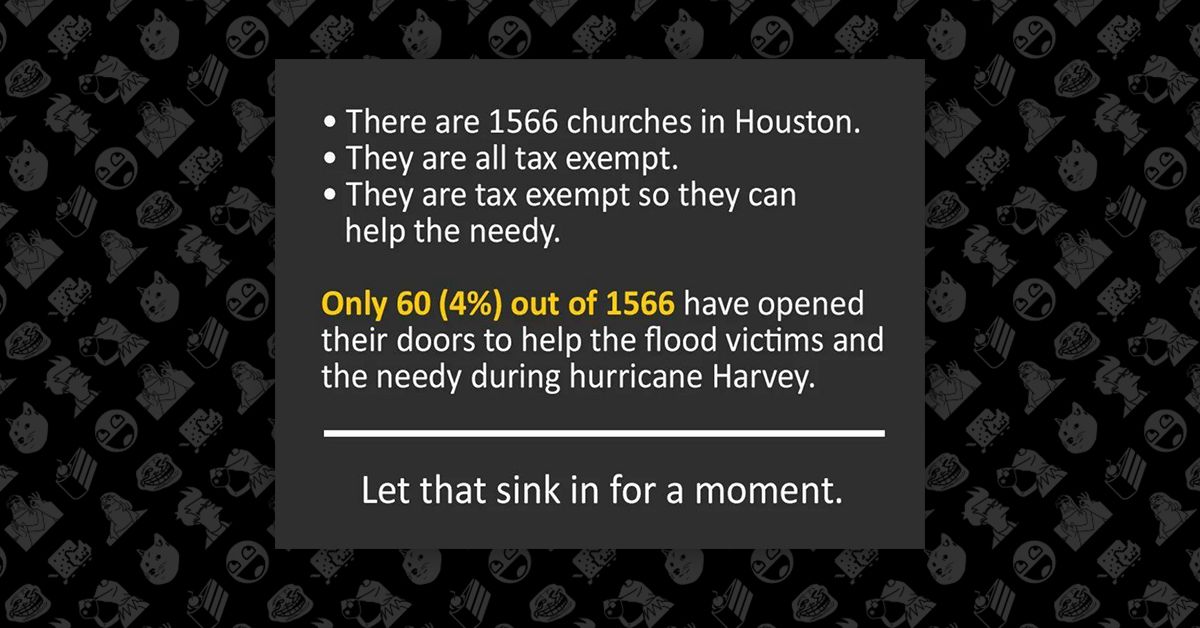 Claim:
Only 60 of the 1,566 churches in Houston opened to help the victims of Hurricane Harvey.
Rating:

On 29 August 2017, a satirical Facebook page called "The Cajun Navy" (not to be confused with the actual Cajun Navy, a nonprofit organization whose members have been conducting rescues of Harvey victims on the ground) posted a now-viral meme that appeared to exploit Internet-driven outrage over the misleading rumor that "Prosperity Gospel" preacher Joel Osteen had closed his 16,000-capacity megachurch in Houston to refugees from floodwaters caused by Tropical Storm Harvey, which made landfall in southeast Texas in late August 2017.

The meme stated that only 60 of Houston's 1,566 churches had opened their doors to flood victims. It was shared thousands of times although it provided no citation for the figures: Only 60 (4%) out of 1566 have opened their doors to help the flood victims and the needy during hurricane Harvey. Let that sink in for a moment.

"The Cajun Navy" page has shared several other posts mocking Osteen and his church for their response to Hurricane Harvey.

Despite the fact none of the figures in the meme are attributed, it was picked up by a Huffington Post community blogger who used it as leverage in arguing that churches should be taxed because they do an inadequate job of providing charity.

However, according to the Internal Revenue Service, religious organizations are tax exempt to promote religious freedom, not because they provide charity:

The meme was shared on 29 August 2017, just a few days after Hurricane Harvey made landfall in Texas — and it seems highly unlikely someone conducted a survey of all of the churches in Houston during this time. Although we don't know the exact percentage of churches that opened their doors (or the number that couldn't, due to flood damage), we have come across multiple reports of churches coming to the aid of those in need in the wake of Hurricane Harvey:

The firefighters put a call out for help, asking if anyone could take the evacuees in. One local youth pastor answered the call. The rescue teams picked up Pastor David McDougle, 26, and his wife from their flooded home so they could open the First Baptist Church North Houston as a makeshift shelter for those stranded.

McDougle said he got a call Sunday evening asking if he would let evacuees sleep at the church, so he and his wife took all the food and water they had gotten and brought it to the church.

Though they now have a roof over their heads, the church is not a designated shelter and has no food or water for the evacuees. The church reached capacity with nearly 300 people laying on the floor of the gym, and the food supply ran out around 5 a.m. People are nervous to drink tap water. The restrooms at the church will not flush, creating a mess of the place.

Houston's First Baptist Church, led by Pastor Greg Matte, is also participating in relief efforts, providing food and shelter to those in need.

Pastor Kirbyjon Caldwell, a former faith adviser to George W. Bush and pastor of Windsor Village United Methodist Church, announced that as of Monday, his church would house those affected by another round of evacuations.

Max Moll, a spokesman for Houston Controller Chris Brown, told us that churches have in fact been helping in various capacities, depending on their ability and circumstance in relation to flood damage. Some have been volunteering while others have been donating clothing and other supplies. Others have opened their doors to shelter stranded residents. Moll told us:

It’s up to each individual entity to decide what they can and can't do. Some [of the churches] are without power, or are flooded, or the roads around them are impassable. There are a lot of ways to respond and a lot of churches have responded in strong ways.

In general terms, the city has three official shelter locations where thousands are being housed — the George R. Brown Convention Center, the Toyota Center and NRG Center. Osteen told "CBS This Morning" that his church has been coordinating its relief efforts with the city and opened the church for shelter when the city's overflowed:

We worked with the city constantly. The city set up a shelter about four miles from here that can house 10,000 people, showers, dormitories, kitchens, security, all that. They didn't need us as a shelter at that point. They wanted us to be a distribution center. ... When they filled up, they said "we need shelter," we started our shelter.