Did Neil Armstrong Flub His First Words on the Moon?

We knew what he meant. 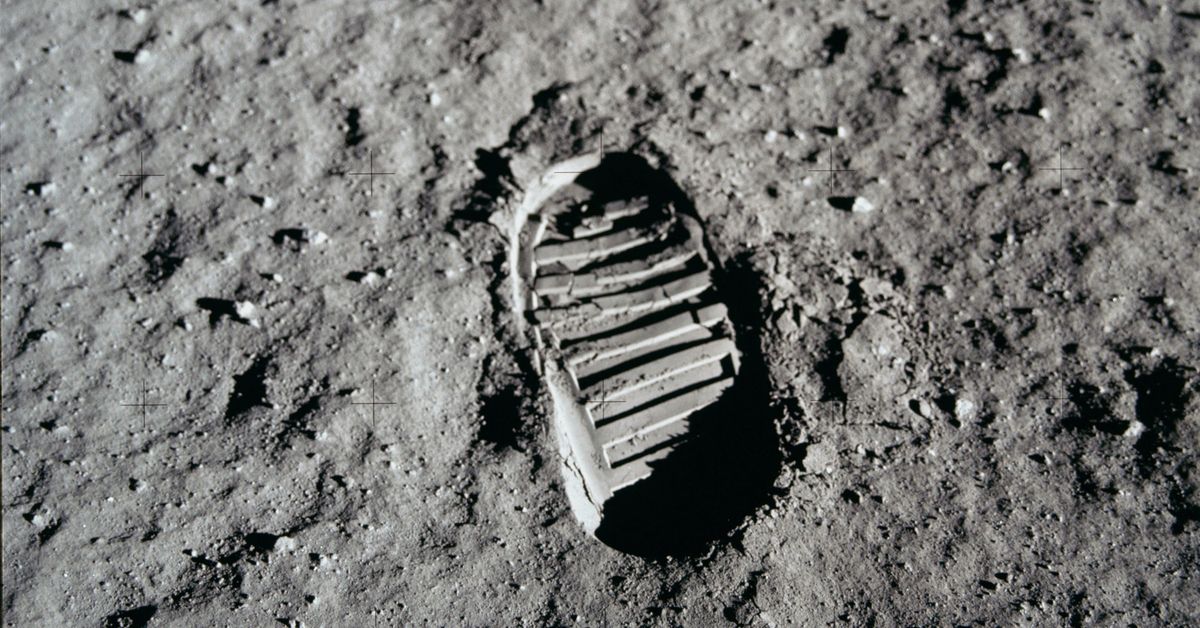 Claim:
Apollo 11 astronaut Neil Armstrong flubbed his historic 'one small step' remark as he became the first man to set foot on the surface of the moon.
Rating:

English has no handy term for what the French call it esprit de l'escalier, and the Germans know as treppenwitz: the "wit of the staircase," those clever remarks or cutting rejoinders that only come to mind once it's too late for us to deliver them — literally, as we're headed down the stairs and out of the house. English also lacks an expression to describe the antithesis of treppenwitz, those occasions when one has a perfect remark carefully prepared in advance but fails to deliver it properly. If English did have such an expression, we could apply it to the words of the first man on the moon, Apollo 11 astronaut Neil Armstrong, who had the misfortune of misspeaking his scripted line during one of the most widely-viewed live broadcasts in television history.

What Neil Armstrong meant to say as he descended from the ladder of Apollo 11's Lunar Excursion Module (LEM) and stepped onto the lunar surface, thus becoming the first person ever to set foot on the moon, was "That's one small step for a man; one giant leap for mankind."

Unfortunately, however, Armstrong flubbed his line in the excitement of the moment, omitting one small word ("a") and delivering the line as "That's one small step for man; one giant leap for mankind." The missing article made a world of difference in literal meaning, though — instead of a statement linking the small action of one man with a monumental achievement for (and by) all of humanity, Armstrong instead uttered a somewhat contradictory phrase that equated a small step by the human race with a momentous achievement by humankind ("man" and "mankind" having the same approximate meaning in English). Nonetheless, since the quote as actually spoken by Armstrong still sounded good, and most everyone understood the meaning he intended to convey, his words were widely repeated that day and have since joined the pantheon of the most well-known quotes in the English language.

After the Apollo 11 astronauts returned to Earth, Armstrong corrected his mistake (stating that he had been "misquoted"), and NASA obligingly provided the cover story that "static" had obscured the missing word:

Neil A. Armstrong, the Apollo 11 commander, had said that one small word was omitted in the official version of the historic utterance he made he stepped on the moon 11 days ago.When Mr. Armstrong saw the quotation — "That's one small step for man, one giant leap for mankind" — in the mission transcript after his return to earth, he said he was misquoted, it was reported yesterday.

There should have been the article "a" before "man," the astronaut said.

The "a" apparently went unheard and unrecorded in the transmission because of static, a spokesman for the Manned Spacecraft Center in Houston said today in a telephone interview.

Whatever the reason, inserting the omitted article makes a slight but significant change in the meaning of Mr. Armstrong's words, which should read: "That's one small step for a man, one giant step (sic) for ma[n]kind."1

Press reporters, however, were more skeptical about what Armstrong had actually said:

On July 20, 1969, Joel Shurkin was chief of the Reuters news agency's team at Mission Control in Houston, Tex. "When Armstrong landed, we all listened to the raw air-to-ground and when he said the part about the 'small step' it was fuzzy — this was the unenhanced version, live — and it was not clear if he said 'a man' or 'man,' " he says, sharing his experience publicly for the first time.Nor were the words perfectly clear for the more than a billion people listening and watching the televised broadcast as the lunar module Eagle touched down, and Mr. Armstrong and fellow astronaut Edwin (Buzz) Aldrin stepped out into what Mr. Aldrin described as "magnificent desolation."

Months after the lunar landing, in the book First on the Moon, which was billed as an "exclusive and official account . . . as seen by the men who experienced it," Mr. Armstrong recalls his famous words as: "That's one small step for a man, one giant leap for mankind."

He notes that Mission Control missed the "a" in the first phrase, writing that "tape recorders are fallible."

However, for the dozens of journalists in Houston, the uncertainty left them feeling their own version of space sickness.

"It was one of the most important quotes in history and it wouldn't do to get it wrong and we didn't have time to pursue the matter," Mr. Shurkin wrote in a posting to a list-serv of the U.S. National Association of Science Writers.

"Worse, it wouldn't do to have me say one thing, and the Associated Press another, or to be contradicted by The New York Times."

The journalists from the major wire services and newspapers gave up watching the live broadcast and huddled in the press room debating what to do. They decided that they would agree on what they heard and all file the same quote.

"We concluded that he did not say 'a man' and that's the way it went out to the world," says Mr. Shurkin, now a writer in Baltimore.2

The New York Times clearly didn't buy the "static" explanation (hence the "Whatever the reason ..." introductory phrase in the final sentence of their article), and little detective work is necessary to reveal it as a face-saving fabrication: NASA's own recording of Armstrong's transmission from the lunar surface reveals that his words are clearly audible over the background static; that the word "man" follows immediately on the heels of "for," with no gap between them into which Armstrong could conceivably have inserted the word "a"; and that Armstrong pauses noticeably after the word "man," as he realizes he's flubbed his line and hesitates momentarily before completing it.

In the years since that historic Apollo 11 mission, astronaut Armstrong has apparently reconciled himself to admitting that he did indeed misspeak his key line:

Later, a representative for the Grumman company (it had built the Eagle, essentially a high-tech aluminum can) presented Mr. Armstrong with a silver plaque bearing his 11-word — now immortalized — sentence, "That's one small step for man, one giant leap for mankind."Mr. Armstrong insisted that they had left out an "a". Sure, he had been awake for 24 hours before his epoch-marking pronouncement, battling lunar stage fright in front of the world's largest audience ever, and was mulling over the fact that while putting on his bulky space suit he had broken the circuit breaker for the switch to start the Eagle's engine for ascent.

But he knew what he said. "There must be an 'a', " Mr. Armstrong says of the event in the 1986 book Chariots for Apollo. "I rehearsed it that way. I meant it that way. And I'm sure I said it that way."

Then the Grumman representative, Tommy Attridge, put on a commemorative 45-rpm recording of the flight. No matter what speed they played it at, there was no "a".

According to the authors, Mr. Armstrong sighed, "Damn, I really did it. I blew the first words on the moon, didn't I?"2

Happily for Neil Armstrong, the tremendous scientific and cultural importance of his achievement dwarfed his minor verbal slip-up, and despite his failure to deliver his line as planned, it remains one of the world's most famous sentences.

In September 2006, Peter Ford of Control Bionics announced he had analyzed the historic Apollo 11 recordings and claimed to have found a "signature for the missing 'a," (supposedly spoken by Armstrong "10 times too quickly to be heard") but the results have not been validated by other audio analysts and have been criticized as simply interpreting ambiguous data to match a predetermined conclusion. As Rick Houston wrote in Footprints in the Dust, a history of the Apollo program:

Note should be made of the debate that has existed almost from the time Armstrong uttered the famous saying. Did he actually say "One small step for a man," with the indefinite article a somehow lost in transmission? No, he did not, and to imply otherwise is revisionist history. Granted, it is possible, if not probable, that he intended to say "a man." From the tone and inflection of his voice it seems for all the world that Armstrong caught the mistake immediately. Following "That's one small step for man," he added another one, stopped again, then finished the statement with "giant leap for mankind." There's nothing lost in transmission, nothing at all, no matter what any super-scientific studies to the contrary might suggest.